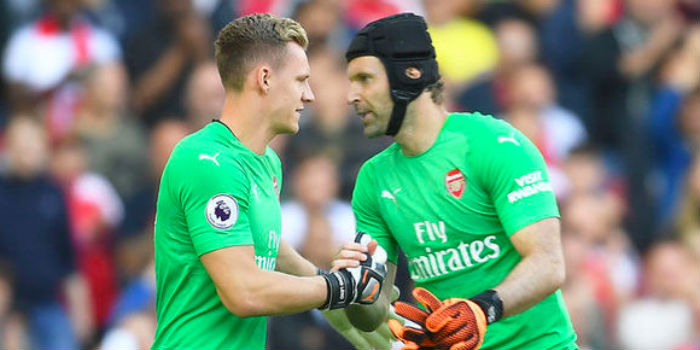 Bernd Leno says he wouldn’t turn down the chance to play in the Europa League final even if it meant Petr Cech was reduced to bench-warming duty instead of a last game as a professional.

The German hasn’t played in the competition since October when he took over as Unai Emery’s first choice keeper. Instead, with the summer signing focused on the Premier League, continental duties have been handed to veteran Cech, who in January announced he’d retire at the end of the season.

Asked what he’d do if Emery decided to bench Cech, Leno told DAZN DACH, “It’s such a big game and everyone wants to play

“I’m not sure if I would say ‘I don’t want to play’ because it’s an unbelievable game and everyone wants to enjoy it.

“You don’t know how many finals and how many big games you can play in your career. So I’m not sure if I would say no.”

The way things are going right now, Leno probably won’t have to lose any sleep over the issue. After all, it feels like the football gods are readying a stoppage-time winner for Valencia just to further crush our collective spirit.

It’s probably better that way, we’re not sure we could cope with Giroud scoring a late overhead kick stunner in the final.

For what it’s worth, Leno maintains that whatever decision Emery makes, he’s fine with it.

“It’s difficult because I want to play every big game and now the games are big and important,” he said.

“But I also have to respect Petr because we push each other. Petr is a legend and still a very good goalkeeper.

“The manager decided that I’m the first choice in the Premier League and that Petr was playing in the Europa League. At the end, you have to respect it.

“I have to focus on every game in the Premier League and if I’m not playing in the Europa League I am focused on the bench because you never know.”

Martinelli knee injury fears, Pablo Mari out for up to three months

Let’s hope in this game our players fill our hearts with joy and gets us to the final. Coyg

And if they get us to the final then for me 100% Leno plays. Cech isn’t a legend at our club, he’s a legend a chelsea legend and he’s joining their coaching staff this summer. Not taking any chances, and anyways Leno is a better keeper at the moment. Fuck sentiment and fuck everyone single one of our players, none of them deserve anything.

I agree. Cech is not the future, and we’re not in a position for sentiment. Play Leno in the Europa final, and Cech can play the Burnley game. Actually I’d even give Emi Martinez a game at Burnley instead to see how he gets on (championship season is over so he should be eligible).

On the evidence of recent weeks where Leno has looked suspect, particularly on crosses I would be far happier to see Cech in goal. He has been brilliant in the Europa League and his greater experience in big matches means he must play tonight and in the Final if we hopefully get there.

I think Leno should play. I fully understand having a ‘cup keeper’ gives the number one a rest and keeps the other vaguely match fit but at this stage of the season it should be number one every time.
I didn’t understand Wenger playing the outgoing keepers in the FA cup finals and I don’t see the benefit of playing Cech now

I mean… On the one hand you could argue fabianski earned his place in final against hull. If a player performs when given an opportunity he should be rewarded like that.

No self-respecting athlete would turn down a first team spot no matter the competition, no time for paying sentiments like that. Leno should start in final 100%.

Cech can embrace the cup glory if we win and that would be a great way to bow out, we can’t start him just because he wants to play against his former team and it’s his last game. There’s a reason he is retiring at the end of the season.

What would he fill it with though

The reason (many) teams play their reserve keeper in cup competitions isn’t to rest their first choice, it’s so that they can have two high quality keepers at the club. No good keeper is happy to sit on the bench all season.

yes, but playing Leno would be a signal to Cech’s replacement that “you can play in the cups, unless we get to the final, or perhaps the latter stages of the Champions’ League”

Irrelevant. Cech has earned the chance to win a final trophy

Don’t start thinking we’re already in the final ffs, this type of talk just reminds me of the League cup final against Birmingham, with the players talking about who should lift the cup.

So …are we just not doing phrasing anymore?

Let’s get to the final first before we start worrying about this!

Agreed. But it applies to this game too

I’ve never liked the idea of not playing your best players in European games and I still don’t.

I found it bizarre and hugely disrespectful when Wenger used to play Ospina in the CL. He must’ve been the only manager who never truly believed we could do well in the competition and took it for granted; an attitude that I think transferred onto the players.

If you want your best chance then play your best team!

Given the many championships he’s won, he has the “muscle memory” and experience to deal with high pressure situations.

Let’s be real: if we get rubbished today or in the final, it won’t have been Cech’s fault. We should worry more about who’s surrounding him.

Justice and fairness demand that Cech keeps the goal if we made it to Baku. And that is not sentimental.

Not sure how we will approach the situation regarding Cech’s replacement.

My suspicion is we won’t spend.

Martinez will be in contention or we will get a cheap (relatively less known) option from market.

Don’t think Ospina wants to hang around and we have more pressing requirements to fill in at Cback, Cm,Wide area all of which need quality spending.