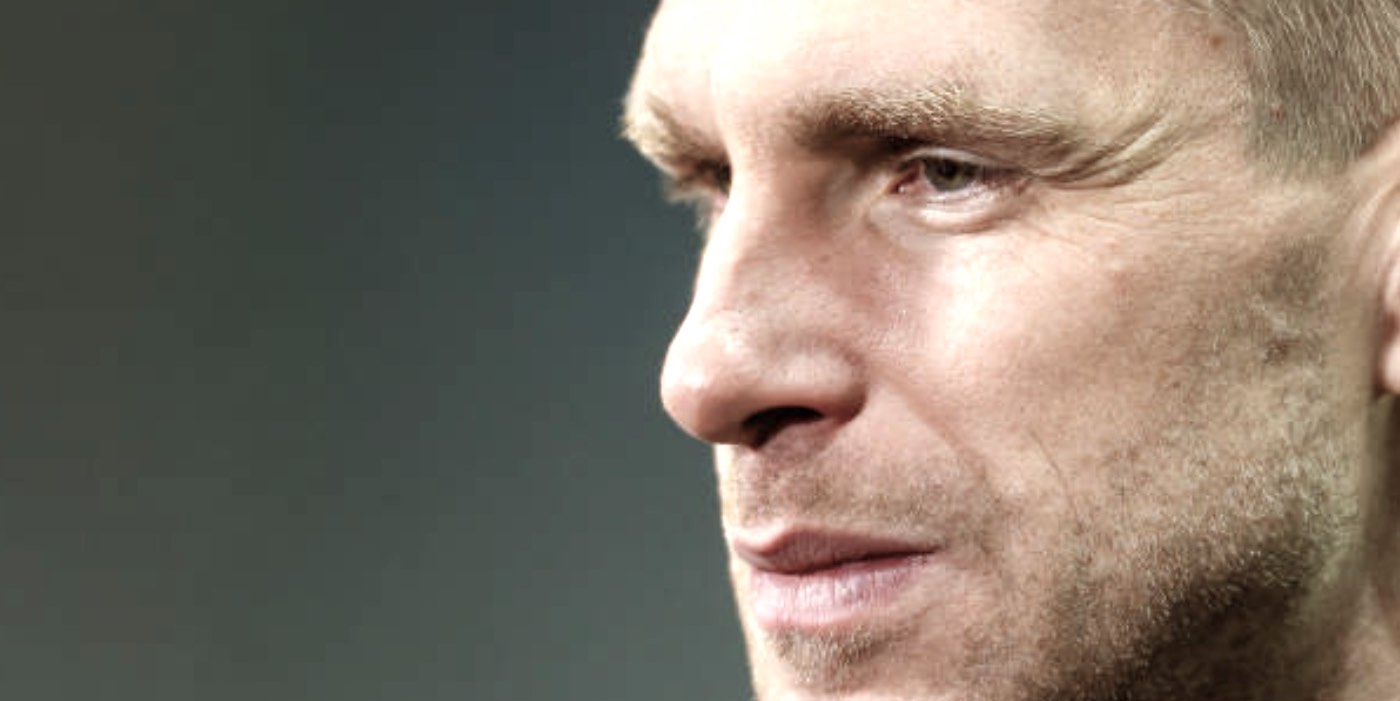 Swiss news portal watson.ch published a long interview with Per Mertesacker today, recorded on Monday at the “FCB Business and Sports Summit” in Basel.

Arseblog News gives a generous tip of the hat to Florian Schneider for providing us with this translation!

Certain developments in youth football I see as dangerous, yes. We leave young players and parents alone to some extent and leave them with the feeling that things are normal. This way expectations are fuelled that have no relevance anymore in later life. I’m thinking about the loads of money that is generated already in youth football to hold on to players in a young age. But it’s about smaller things as well. Our youth players are provided with taxis to go to training. In which other business in the world does this happen? That’s a fake environment that’s created. That’s what I see as dangerous, because in the end only few find a place in football. If that was not the case, one could look beyond this.

You used to ride a bus to training. Do you resent the feather-bedding of young professionals?

Yes. It’s important to find your own way and bring something yourself in order to live through a certain process. They shall think: Where do I have to acquire things on my own? Obviously it’s easier for the parents as well if the club provides a taxi. But what does this prepare for the future? That’s the question I’m asking myself. These are developments that need to be highlighted closely. I come from another generation and we can’t turn back time. But we should really try to retract certain things. Sometimes in these areas it is helpful after all to stand still.

Would Per from Pattensen have come to terms with these preconditions?

I don’t believe so. That’s why I’m so happy to have grown up in a different environment. I had to work out things for myself and therefore I’m very grateful for them. Appreciation is a very big topic. If I’m having taxis and money thrown at me, appreciation for the smaller things is not there anymore. That’s why I can imagine I too would have been flying high thinking this is normal.

Do you tell the boys episodes like the one in which your father, during your first contract negotiation with Hannover 96, made sure you got 1000 instead of 2000 € with the main thing being you play with the professionals?

(Laughs out loud) That’s an abstract example, but it shows how quickly the development is going. Today we are not talking about €1000 but about €100,000 and more and about parents demanding more rather than less. These are the big differences. But of course I tell such stories about me.

Do the boys even believe you?

What does believe mean? I simply try to show the other side with examples. It’s becoming more and more difficult, though. There are agents piggybacked on parents as well, which there weren’t back in the day. The young players always have boot contracts already too. During my time you only earned a boot contract if you were an international in the first team. Nowadays you earn one in the U13. Potential is getting paid already nowadays.

What can be done about it?

At Arsenal in the academy we are currently trying to retract a little and develop certain values. Although it will not be possible to stop that completely. That’s how it is. Maybe the wheel will someday turn in the other direction. This is my thought and my hope, that people see it’s for the best for the education to initiate these steps. Because money fuels false expectations. Towards the next contract or that the parents can stop working because the son is suddenly the main earner. These are developments I see very critically.

Do you have the feeling that the football bubble will burst eventually?

Yes, hopefully! We are all responsible that eventually one remembers values from the education. Values of personality development and values that prepare us for life. Not values that limit us more or less to this football business. There will from time to time be the odd exception that concentrates only on football and makes it. But it’s about the rest.

Are you not afraid of being only a drop in the ocean with your ideas?

Youth football is an extremely long process. Harvesting the fruits of hard work year by year can take extremely long. But I’m not here to say: I’m gone again tomorrow. That’s a responsibility I’m laying upon myself and that I’m feeling when I talk to parents or players. You create connections there that you don’t mess up so quickly.

You describe yourself as talent-free. Your biography’s title is “World Champion without talent”. Would you have wished for somebody like yourself to foster you in the right way?

(Laughs) I refer talent-free to the football term. Say, if you couldn’t actually play football, you were talent- free. My biggest talent was simply to perform in situations that really mattered. For example when in a U17 training session five people with important functions were watching and I didn’t even know they were there. Or when I was training with the first team for the first time, I just delivered. The same goes for the important games with the first team. That was my biggest talent on my journey.

This was a constant. Despite immense nervousness before the games – you have related to multiple bathroom visits, overwhelming nausea, and tears before games – you still delivered.

Exactly, yes! (Laughs) On match day there was always a weird feeling. Going to the bathroom five times, having this feeling something is happening. This was a big pressure I felt personally. To release this and still being able to play freely was a big struggle. But still it felt good in the end.

Did only you have such issues?

No, but everybody is individual. Some are not affected at all, others go to the bathroom five, six times too and feel a rumbling in the stomach. Each has his own history, only very few talk about it.

How does one teach young players to talk about their feelings?

No idea. (Laughs) I just try to learn from my mistakes a bit and also to build a connection to the lads. However, there are not 50 people walking in my office asking: “How was it for you?” For me it’s just about opening myself up and being there if anybody would like to talk about anything.

I don’t know. Maybe at Arsenal in one year they [youth players] will say: “This is too much for me, this is too much stress. I’m prepared to leave. Because I will probably get sick myself.”

Is this why you don’t want your two sons to go to the Academy and become footballers?

Exactly. How things stand currently it’s not the right way. Only if one day I can say: “This education is the best for you football-wise but for your personality too.” That’s my goal. That’s where I want to go.

You are working in the youth sector but still you’re very close to the highest English league. How do you assess the development of the Premier League?

We have seen two very dominant teams. It’s been fun to watch because at least there is competition.

In other countries there has been no competition at all for years. How can this trend be stopped?

That’s very difficult. First of all for the spectators it becomes boring going to games with nothing to play for. That way a lot goes missing. In the end the league has to think about how to spread chances across more clubs.

The Champions League semi-finals or the last day of the Premier League showed: When it goes down to the wire, football is just unbeatable. It’s much more fun when the league has to carry two trophies to two stadiums on the last day, as was the case in England, because it’s not clear who wins at the end.

Isn’t Florian Schneider one of the guys out of Kraftwerk?

Wow, didnt know they’re a real band. I thought they were just one of craig Ferguson’s joke.

Think he/she must be talking about this..
https://m.youtube.com/watch?v=JQcmyXCskFg

In all seriousness it’s great to see Mertesacker’s views, so glad to have someone like him on board. It’s so ridiculous what happens with young players these days, boot contracts at u13 ffs – what a job to try to keep the kids grounded

Totally agree, 13 is a crazy age for this stuff.

I hope that people in the industry and the youth players are taking notice of his words for their true meaning, which is very valuable. I think there is a risk of him being seen as a member of a bygone generation saying “well back in my day, we didn’t have fancy things!” In reality, his ideas aren’t coming from bitterness or spite, but from experience that should be passed down. I’m glad the kids at Arsenal can learn this perspective.

I think his main point is not that a shoe contract is so bad–but that many kids are encouraged to believe that they will soon get one, that parents think they can stop working, etc, but that this is true for only a very small minority of even the most promising kids. For all the others, they will be on their own, with no real education, no knowledge about the real world–they won’t even know how to take a bus.

Having taxis thrown at you really doesn’t sound pleasant!

Per is an outstanding bloke! I must admit I have even met puppies that were less likeable than Per. That’s how outstanding he is.

Reminds me of Wenger in his intelligence levels.

Great man, have to say.

CBD oil for anxiety and nausea seems to be the new craze.

Also Combats pain, inflammation, muscle spasms, and is used as a form of recovery, and a far more effective and natural pain killer than previous methods.

It’s not a craze, it actually works

Per is an articulate down to earth chap. Hope he passes on his values to the Academy kids. Thanks for the article Blogs.