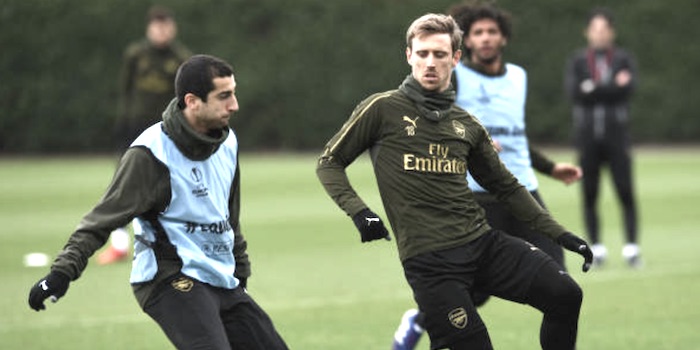 Nacho Monreal has hit out at UEFA after it was announced Henrikh Mkhitaryan would not be able to play in next week’s Europa League final.

While expressing his sadness towards a teammate, he insists it should not be possible for any player to miss out on a game due to politics.

The Spaniard was speaking at an open media day, and touched on this and other subjects. We have a full transcript of his interview with OkDiario, including his thoughts on UEFA and Mkhitaryan.

Question: Who is favourite for the final of the UEFA Europa League?

Answer: It will be a very hard fought final between two teams that know each other perfectly well. We play in the same league and we have faced off on many occasions. It has that ‘spice’ that we are from the same country, but I think the team who makes less mistakes and is more reliable will take the final.

Q: Have you sent a message to the Spanish players of Chelsea?

A: No, not yet. There is no ‘pique‘ in that sense. There are several Spaniards in Chelsea and I have a good relationship with practically all of them, but the day we are playing the game you forget, because there are no friends on the pitch. Although it is true that after the final we will talk and logically there will be some more happy than others.

Q: Unai Emery has already won three Europa League. What has he transmitted to you?

A: It is very positive to have a coach who has won three UEFA Europa League finals. And that is noticeable when he speaks to us and when he transmits sensations about this competition. He knows what he is talking about. This reaches the players and gives us encouragement at specific moments regarding the advice he has given you and how to react. Hopefully at the end of the season I have one more.

Q: Would it be a failure not to win this title, and therefore not qualify for the Champions next season?

A: The fact of reaching the final is already something to be happy and proud about. It is a very long and complicated road. There are many teams of great level and we have got there. But we are ambitious and logically we want to win. The priority was to play Champions next season and now we have to win to play in it.

Q: You are going to have a sensitive low as is that of Mkhitaryan who will not be able to attend Baku. How do you receive a news of this type with a friend and a friend?

A: It’s kind of sad. It is news that we already knew since the group stage began. From that moment we already commented that in the event of reaching the final he would not be able to be because there are such differences between the two countries, Azerbaijan and Armenia. It’s a very sad loss because I think you have to consider the players. In this sense UEFA should be more careful and know where you choose the venue for a final. It is not possible that there are players who can not play for political reasons. I do not believe that things are done well when these kinds of circumstances occur.

Q: There are also problems with tickets to attend the final in Baku.

A: Well, this happens every year. A stadium in which holds 70,000 and there are only 6,000 tickets for each of the two clubs. In the end it is they who have the way or the ways to carry out that distribution. I am more concerned about the fact that we lose a player because he can not enter that country than the ticket issue.

Q: How does Nacho Monreal face this title? Since it can be his first European title.

A: Yes, logically it would be my first European title and I face it with a lot of desire and with a lot of responsibility for everything we play, for all that it means for this club, for the players, for the fans, etc … I am psyched, eager for the final to arrive, wanting to do things well and win the title.

Q: Arsenal have a lot of potential up with the presence of Aubameyang and Lacazette up, but how will Nacho Monreal and Arsenal stop players like Eden Hazard?

A: The two teams are quite even, from my point of view. In every sense. I do not think either of the two teams, to this day, is far above the other. We have met in Premier and in Cup. We have won and they have won. They have always been very close games. We are aware of the players who have: Hazard, Pedro, William, Giroud, Higuain, etc. They have a lot of quality. But not only them, everyone, even defensively they have great players. We have faced each other many times and there are times where things have gone well and others worse. Although we hope that in this final things go well.

Q: Do you think it is easier to play this final knowing both the opponent?

A: I don’t think so. It is true that we can know Chelsea a little more than Eintracht, for example, but they a very powerful club that always makes it very difficult for us. In that sense I do not think there would have been big differences.

Q: Osasuna [his former club] has just returned to the First Division. I imagine that it is a personal joy of face also to face this end.

A: Yes. Of course, I’m super happy and super proud to be back in the First Division. It is the place where they deserve to be. They have had an impressive season. At first it took a while, but once they picked up the pace they were unstoppable. I left there, I follow them a lot and I am very happy that they are in the First Division.

Mkhitaryan: Arsenal did not pleasure me

Well said Nacho. I’d like to see a few more players, on both teams, stick their heads over the parapet, since it’s clear that the pusillanimous gimps running the game have no interest in doing so.

My opinion is we should have boycotted this farcical final. Fuck em. If it means we miss out on top 4 – too bad. Principles come first, not buying in to a fucken corrupt and immoral scenario.

I’m a big fan of reporters asking the players questions in 3rd person. Reminds me of Jaqen H’ghar

Goonerjag is also a fan of 3rd person questions!

I don’t know if I’m being paranoid but if we keep bashing the UEFA will they send their ref after us during the match? Or positively get favors because we are missing a “key” player? I think I’m mind gaming myself here… Don’t get me wrong they deserve a bashing but perhaps after the match?

IMO we should extend on Monreal one more year. This will alleviate the need for us to search for a LBack just yet. Of course if a Lback does come in on market and we have spare cash to burn, we can bring one in. BUT with the number of positions to fill this summer, having to deal with a Lback loss of Monreal at this stage will only distract matters further away from areas with more priorities. Again, the main positions we need to resolve : 1) Cback – We don’t have to get a top name or break… Read more »

Nobody:
Santori: Here is my thesis