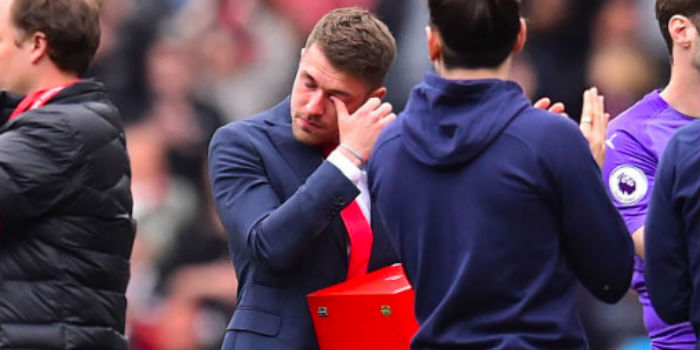 Aaron Ramsey was left in tears as Arsenal honoured his 11-years service with a short on-pitch presentation following the 1-1 draw with Brighton.

Ruled out for the rest of the season with a hamstring injury, the Wales international was given a guard of honour by his teammates and then bid farewell to supporters as his name rung out around the Emirates.

With two FA Cup winning goals to his name, the 28-year-old leaves for Juventus having stamped his mark on the club’s history.

“It’s been a pretty emotional day,” he told Arsenal Player. “It’s 11 years of my life that I have spent here and so much has happened to me on and off the field.

“I have really grown up here. I am just grateful for the opportunity to play for this club for such a long time.

“I’ve met so many great people here, made great friends and Arsene bringing me to the club and giving me that opportunity was pretty special.

“To last this long, at a club like this, is something in itself. That doesn’t happen very often anymore, that’s why it’s so emotional and why the bond is so strong.

“I just want to say thank you very much for all the fans’ support over the years, there has been a few lows but lots of highs and the bond has been so strong because I have been here for such a long time and they have been with me through thick and thin, watching me go from a boy to man.”

We’ll miss you Welsh Jesus. In fact, we’ve been missing you for a few weeks already.

All the best in Turin. We’re sorry you have to see Ronaldo oiling his buttocks. Hopefully, Wojciech will help you cope.

You really have to ask yourself what the fuck are we doing letting this guy go? And for free? To not get a single penny for him is sheer incompetence, in fact i’d go further to say its actually negligence. A very good friend of mine works in football, and he has his ear pretty close to the ground when it comes to all things Arsenal because he is a huge fan. And he told me a few years ago that the people in key positions at the Club are complete clowns — this was prior to Gazidis leaving. I… Read more »

Will never, ever forget the moment when he scored the third in the 2014 FA Cup final. Thank you Aaron

Juventus will feel more Arsenal than this current side next season. Is there no way of getting Arsene in as a Director of Football. We’re turning into Man United.

Arsene in as Director football.??. You must be on drug’s.?. This is his mess. The team are a picture of him. Serial bottlers and gutless. We need to him the bulk of them and start again. Get some players in with some back none and character.

IMO Ramsey deserved better than this!! There’s been some rats force there way out of the arsenal over the last decade but he’s been the model pro!! I’ll miss him, he understood what it means to play for the arsenal

Thanks, Goodbye and good luck. We love you Rambo.
Interesting summer awaits AFC. I wonder if we could convince Rabiot’s mom to let him play for us. He could be a bargain if attainable.

I think we’ll have to confirm champions league football for next season before calling his mum. But yeah, it would be hell of a replacement. Fuck the result today.. I was so happy to see Aaron walk on to the pitch in the end. But the moment I saw his tears I just broke down. Like the moment to say goodbye to a really old friend was finally here and you just don’t want to let go. There’s STILL a part of me that is imagining him tearing up the juventus contract and appearing out of nowhere next preseason with… Read more »

We can only dream :’

He won’t last the lenght of his contact with Juventus

I’d like us to chase Van de Beek as his replacemente, maybe is only me, the guy is everywhere on the pitch, and have an eye for goal as Ramsey

There’s only one Aaron Ramsey

Onenil
Reply to  Ramsey, the phoenix

He’d have got us top 4 this year if he had lasted a couple more games. We are literally missing him already.
Bye Rambo enjoy Italy. ?

Criminal mismanagement by the club to let Rambo go. Legend. Hope he sticks one on Ronaldo like he did on RvP.

I don’t cry often but honestly seeing his interview on Sky Sports absolutely killed me. He couldn’t even get his words out properly because he was on the verge of tears. A club legend. I’ll really miss him

Sad and somewhat ironic that most of our paying punters couldn’t seem to separate an appreciation of Ramsey’s contribution to Arsenal over the last 11 years from their disappointment over our ineptitude without him in our last four league matches and stay behind to give the guy the plaudits he deserves.

…or maybe ‘connect…with’ would have been more apt than ‘separate…from’.

Completely agree. Embarrassing to see the stadium emptying while the Brighton fans sang about how shit we were (hard to argue with that – I’m talking about our fans as much as the players).

On the plus side those who stayed behind gave Rambo, Cech and Welbz a good send off. As an aside, when I left the stadium about 45 minutes after the final whistle Ramsey was still chatting to fans, signing shirts and taking selfies. A true gent, a consummate pro and by God we’re going to miss him.

And now this blog will close or will turn up a Juve blog in order to go on worshipping this over rated and now over paid guy.

So overrated that Juventus snapped him up on massive wages.

He won’t last his contract at Juventus

If you don’t have anything respectful t add to this farewell post then it’s probably wiser to say nothing. After all you’ve got what you wanted, he’s gone and you can find another hate figure.

Cmon man time and place for everything

Was waiting for the ozil fanboy to pipe up with some Ramsey hating. epic timing given the absolute shit show your paramour turned in yesterday. overpaid? Would you like a side helping of irony with that deluded pie?

Thank you for your contribution towards the Arsenal, Aaron Ramsey, and best wishes for the future.

What a day to bid him and Danny farewell on.

Fairly representative of their time at the club though. Whenever the club get in a good position, they choke.

A genuinely good man who knows how damn lucky he is to be a professional footballer. To come back and perform that he has after that injury tells you a lot about him ( including his mental strength). I think we will all remember those finals where Rambo performed. Has had a few disruptions to his career because of injury and one wonders whether those were as a result of the major one. Perhaps without those disruptions he would have achieved even more at Arsenal but hey he always gave 100 per cent and has made the very most of… Read more »

Who the f*** is downvoting!

sad rambo leaving, an example to younger players how to be a professional football player, never bottling it away from home, giving his all in games, a shame when hes been on top of his game an injury is not far behind, better team certainly this season when he’s been there, good luck to him, arsenal through and through..

This is a guy who ran his contract down to go on a free to get a massive weekly wage. If he loved the club so much, why not sign a new contract so we could command a fee for him? Having said that, he was inconsistent, injury-prone, and failed to live up to his potential. Farewell to the last of the underachieving Wenger era.

He wanted to sign the contract, you absolute weapon.

Our top 4 went into smoke the moment he got injured. Too easy to tell that we missed him for the last few games.

Best of luck Rambo. You deserved so much more and I wish you all the best.

Started losing top 4 spot when we lost Holding n had Mustafi become a major part of the defense, and to then have Rambo out was just too much for the Arsenal.

Hopefully we get pass Valencia, Ramsey comes back for finals, bows out scoring the winning goal (courtesy of ‘unintentional’ Giroud assist) against Chelsea.

We get into CL win a cup to match Spurts top 4 trophy.

Otherwise season will be tepid at best.

Farewell, hopefully you can get a Champions League with Juve you deserve it. Unfortunately Arsenal is useless…

Losing a player of that quality, who utterly loved and represented the club, who had contributed that much, who’d won us trophies, and for free, is beyond inexcusable. Fuck everyone involved with this appalling decision. A squad bereft of leaders loses one of the few players left with any connection to the club and our history.

Stop with those onions now 🙁

Very sad to see him go, but Arsenal made the right decision in the end. As soon as Emery started to play Aaron regularly, his body broke down again.

We cannot afford any more players on top wages that cannot play most of the games.

Sadly you do seem to have a point…but we’re still going to miss him all the same!

There are a lot of issues in which I have patience and sympathy with Emery, however this is one he cocked up completely.

I refuse to believe that if Ramsey had a midfield built around him and an armband he wouldn’t be staying. Why have we allowed our best midfielder and most loyal player to walk out of the club for nothing?

So gutted that hes leaving! Shame on you arsenal for letting this happen

@We are sorry you have to see Rinaldo oiling his buttocks. ROTFL

For me Ramsey was one of the few players with the right mentality in he last decade. Just a shame his body didn’t agree.

We gonna miss your service #Rambo. We wish the best..

Maybe not the most consistent player, and obviously injury-prone, but a talented player who cared for the club. Also some great Cup moments.