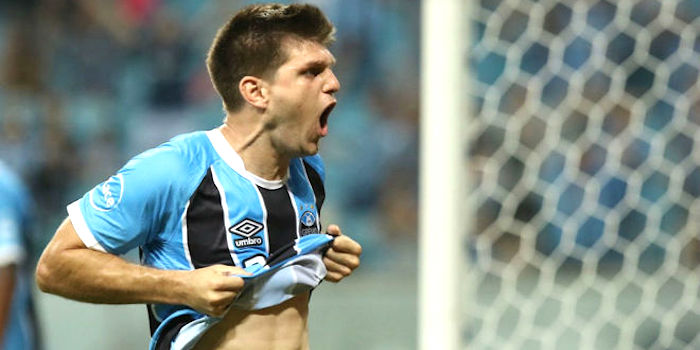 According to a report from Italian outlet CalcioMercato, Arsenal are interested in Argentine defender Walter Kannemann.

They say that interest in him from Inter Milan and Sampdoria is complicated by the Gunners, with some suggestions that a £10m bid is imminent.

The 28 year old has spent his entire career in South America, starting with San Lorenzo in his home country, before a season with Atlas in Liga MX, before joining Brazilan side Gremio in 2016.

The fact that he’s in Brazil right now, and we’re widely believed to be appointing Edu as our new Technical Director during the summer, might lend some credence to the link, but right now it feels a bit like the usual summer bluster as the machinations of the transfer market get underway.

Kannemann, whose nickname is ‘The Filthy Pigeon’, has 5 caps for Argentina.

The Poo-o-Meter is ticking on this one, but let’s see.

I may have been watching a little too much Hitler’s Henchmen but this dude sounds like his family could’ve… er… emigrated back in the 40’s.

Though lots of players do, when it’s only their best bits.

I remember thinking the same thing when looking at Mustafi’s Valencia highlights. Really doesn’t say much these YouTube videos

Yes, but how long would it take to upload 80gb of video to You Tube ?

Before you upload the video maybe you want to watch some of those matches again that Mustafi actually put in decent work and also saved us dropped points.

Just from last game alone with the block against Burnley for instance.

Had that been Sokratis you would be making an 80gb video to wank over no doubt.

In that position every screw up is a potential goal. It doesn’t matter how good he is the rest of the time.

Yes but you can also put together Torreira’s worse bits this campaign and it will look as equal to Mustafi.

Santori getting rinsed on Arseblog since his Football Manager-esc plans on how to fix Arsenal. Too funny

If the clip is anything to go on (it’s not, typically) he’s got some of the traits of a Koscielny-ish style defender.

Likes to go on walkabout a bit though, and I’m not sure that’s really the answer to our questions.

Playing with 10 men is better than with Mustafi in the team.

Mustafi apparently better than playing with Jenkinson at Rback.

Watch Torreira give the ball away at BHA, Soton away, West Ham (United and Liverpool matches too) where he was fleeced off the ball…Over either side of Xmas, he contributed to 4 goals against us leading to 11 points dropped.

Yet some would deem to criticise Granit instead and conveniently ignore Torreira’s mistake then wonder why Emery was starting Granit ahead of the little fellow.

Damn, man. You either reaally naive or plain stupid to just keep posting the same stuff over and over again with a couple of to none people agree with you and not to mention that you very very very rarerly replying to others who tried to have discussion with you.

I am all for freedom of speech. But I’d rather fatgooner all day than this guy

Arsenal football club. Budget without the CL 40 million.
I swear to God teams coming up from relegation have a bigger budget.
How can we let Kronke get away with this?
40 will probably buy you 2 Europa league players and we need 3 4 Champions League quality players.
Unless we protest properly and drive him out, we have no future.

I don’t think it is Kroenke’s fault. The failure to sell Sanchez left us short 60M plus saddled with Mhkitaryan, renewing Ozil’s contract left us carrying a huge wage, which may have had the knock-on effect of Ramsey, deservedly, wanting similar compensation. Then we failed to sell Ramsey at a loss of ~30-50M and Welbeck (15-25M). The blame lies with a combination of Wenger, Gazidis, and whoever made the Ramsey decision, it has little to do with Kroenke. We are supposedly close to breaching FFP, even if Kroenke could give Arsenal some cash, it would get us into FFP problems.… Read more »

Ya gooner
Reply to  btw

Btw makes a fair point, but krobke is a hubting wanker so the more reasons to hate him the better. I understand 99% of billionaires have questionable morals but still he’s a twat.

btw is making a good point. We have been substantially poorly managed even WITH Raul and Msintat (*if not more) Too many people simply wanted to see what they wanted to. They blamed Wenger and Dick Law for everything but reality is Raul and Mslintat have saddled the wage structure which meant Unai was less able to have any wiggle room to add a substantial player (beyond and out of confidence Suarez) Practises of the past (mismanagement on the part of dealings with the Ox and Gnabry) were further compounded with a lack of resolve to play Ramsey against Ozil… Read more »

I would go for Abdou Diallo.
Two birds with one stone (CB, LB)

Ya gooner
Reply to  Flash

I read abou diaby and smiled a little

But are those birds filthy enough?

One of those manky one legged pigeons I suppose.

Manky really is an underused word

Filthy Argentine CB? Yes please! No more jokers, DJs, and nice guys in our backline for me. Just nasty, menacing looking, silent dudes, preferably from the North, but an Argentine will do fine too.

Menacing, him? Have you actually seen him? I like the guy, but IHO he looks like Mert’s feeble minded smaller brother.

All monies should be spent on a midfield general to stop all the shots that we allow people to take. Less shots, less goals, more points.

Kannemann has been one of the best defenders here in Brazil for quite a while. Sure, he’s a bit old and never played in Europe, but he might be one of the more suited defenders to make the jump successfully.

I know it’s only rumour but, fuck me, £10m for a 28 year old who’s never played in Europe to fill by far our most urgent position? Is this really what Arsenal have become? What we’re being linked with? Not even competing with Everton or Watford in the transfer market. I just don’t understand why we’re all swallowing the boardroom (via Ornstein) lies so easily. Yes, we bought two expensive strikers, yes Ozil’s and Miki’s Wages are high and we bought two expensive strikers but we also lost the wages of Giroud, Wilshire, Walcott, Ox, Gabriel and Perez off the… Read more »

Santori
Reply to  Me So Hornsey

Preferably the age of the Cback we should bring in should be between 23-28yrs. 28 should be top end. We brought in Sokratis at 29yrs as a stop gap. Koscielny (with substantial durability issues) at 33yrs should be dropped. So with Holding still fairly young (Mavropanos developing), Mustafi and Chambers mid age, we can afford to bring in a 28yr old with experience. Whether this chap is the ticket is moot because we don’t know our operating budget (let alone have a technical director) until we complete the europa finals in Baku. If we win, we will have a substantially… Read more »

So no need to get hysterical.

Everything is a bit of a mess at the moment because we have yet to secure a technical director. And that may be dictated by Raul not those above him (Venkatasham etc…Gazidis esteemed succesors) who lack clout and/or Cojones and seem to have given him the run of the roost – which means he may not bring in as strong a candidate so he can have control. This is not good for us. This may make us at best rudderless in decision making in market worse we may cut corners further. PLUS it seems premature to go in for any… Read more »

I will add that we won’t get much from player sales. 1) We will free up 330K + from players confirmed in leaving – Cech, Lichsteiner, Welbeck, Ramsey (sadly) Maybe Koscielny as well bc he will face more wear and tear issues if we should keep him next season (I don’t think we should) 2) A second tranch of players (that have less effect on wage or purchasing power) but we should free up regardless is Elneny and Jenkinson. We have not been able to flog them off but they are practically more useless than Mustafi to the team and… Read more »

Fantastic nickname, but don’t know about the rest.

I don’t know anything about this guy, but maybe they’re looking at a 28 year old because they believe in some of the players coming through. Chambers will likely come back and he’s had a good loan season, Holding will be fit, Bielik has massive potential and needs a chance, and there may be others in the Academy. We have Kos and Papa going into probably their final season, Holding and Chambers coming through and Bielik and Dinos would be an awesome partnership if it worked out. The bonus is that Chambers and Bielik can also play defensive mid.

Buy a defender from premiere league itself.

Do what Liverpool and city have done. Buy great proven premier league players. So they don’t give to take time to adapt. At city , walker, stones, Liverpool , mane, van dyke, Robertson half of Southampton , oxo chamberlain.
So using that logic we buy, Lewis dunk and Ryan Frazier , both had great seasons with best years ahead of them . Would both come for pay raise and European football. Get both for 60 m.