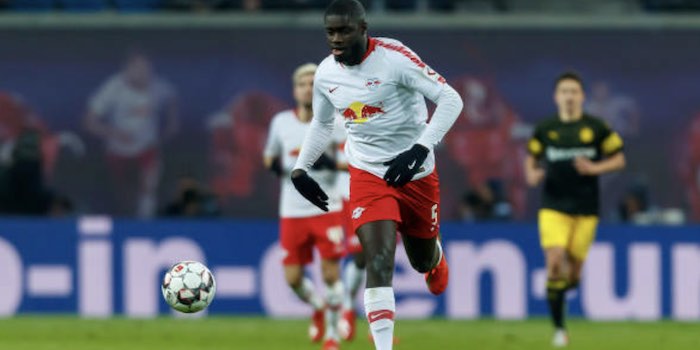 According to a report on ESPN by Rafael Honigstein, Arsenal are interested in signing central defender Dayot Upamecano from Disgustingly Sweet Energy Drink Leipzig.

The 20 year old just completed his second season with the German outfit, helping them a third place finish behind Borussia Dortmund and champions Bayern Munich.

He made 22 appearances in all competitions, but missed a significant chunk of the campaign due to a knee injury.

He began his career with Valenciennes, before joining Disgustingly Sweet Energy Drink Salzburg. From there he spent a year with their feeder club Liefering in the Austrian league, played a season for Salzburg before moving to Leipzig for a fee of around €10m.

He has represented France at youth level, but hasn’t been included in the squad for this summers European U21 Championships – we assume because of the fact he missed four and half months with injury before making his comeback on the final day of the season.

The Gunners have yet to make a bid, and are probably waiting on the outcome of tonight’s Europa League final before finalising their summer transfer plans.

We’re not sure where to go with the Poo-o-Meter on this one. So close to the Europa League final there’s a fear we might cross the poo streams and end up at an 11, and nobody needs an 11 poo.

We don’t even have a graphic for that.

I think I need a drink.

Looks like a certainty – the injury record convinced me.

I’m sure well pair him with our £60m signing Umtiti.

A guy whos had his knee patched up by witch doctors.

Arseblog talks about poo… says he needs a drink…
Ewwww!

It’s either we’re idiots to want to sign all the injury prone players around – or we can get them at a cut price. Which is no value for money as they’ll sit half seasons out each year. It’s different from the Diaby/Rosicky/Ramsey/Eduardo type situation, we should really steer away from these kinds of players. The few positives about Xhaka is that he plays through all seasons without big injuries, we need more of the type, but better players obviously 🙂

You should drink a can of disgustingly sweet energy drink Salzburg

On a separate note is blogs now doing voiceovers for Arsenal Media??? There’s a build-up video to the final on Youtube that sounds an awful lot like him…

It absolutley has to be ?

If that’s the case may as well promote Mavropanos.

We need more experience than that.

Yess!!! I have been championing him for the last 6 months!! Told people I had the same feeling Inhad when the Hleb rumours surfaced

Noo! I thought it was konate…..just saw a leipzig defender

Konate won’t be leaving that club for less than 150m.

But if we can smuggle Upamecano out of there, we should go for it. He has just as much potential despite the injuries

Why do you call the “Lawn Ball Sport” club an energy drink?

He is great on Football Manager. Always ends up world class. First player I always buy

Lol was just gonna post the same thing. Him and de Ligt from Ajax are insta-buys.

A good young player. Part of a talented group of young centre backs coming out of France, alongside Mukiele, Diop, Zagadou and Saliba. We do need to stop missing out players from many countries golden generations, like how we don’t have a single Belgian player and their golden generation is already over. Our scouting hasn’t given us a head up on anyone and we have usually been late to the party, so I hope this is us moving in the right direction. In saying all that, I still believe in my assertion that we have the best group of young… Read more »

We already chose the swiss golden generation (Djourou and Senderos) a couple of years earlier and couldn’t commit to the Belgians.

What about willy orban?

Now he is a really good player and a leader as well.

We need a winger more

Not getting him now though are we