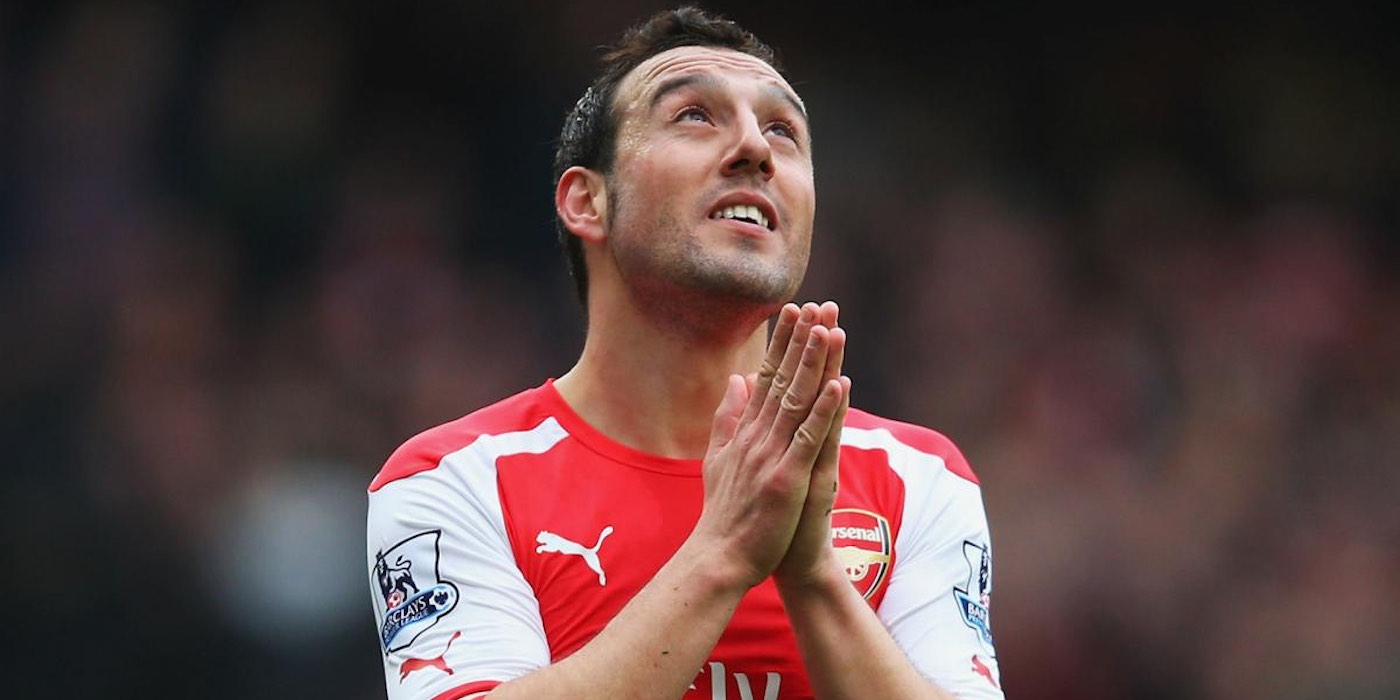 Ok, we know he’s not officially an Arsenal player anymore, but are you going to complain if we do a story about Santi Cazorla? Of course not.

Well, there’s always one or two, but our advice to you guys is just don’t read any further, go outside, get some fresh air and think about life. Come back later and there’ll be a story you might like better. Or not. I mean, if this doesn’t make you happy, there’s no hope.

Anyway, Santi has been brought into the Spanish squad for the first time in four years, having gone through an absolute nightmare with injury and infection. He was out of the game for 18 months after limping off during a Champions League game against Ludogorets in October 2016, and some experts cast doubt on his ability to even walk properly again, let alone play football.

He returned to his former club Villarreal last summer, and this season has made 45 appearances, scoring 7 goals and providing 11 assists. You’d have to have a cold, cold heart not to enjoy seeing him back on the pitch again having lost such a significant chunk of his career.

To then have his season capped with a return to the Spain squad is brilliant to see, and the 34 year reportedly burst into tears when he was given the news.

It’s a shame we never got to say a proper goodbye to him as he left without ever pulling on the shirt again, but there’s no lack of affection from Arsenal fans towards him.

His recall also comes on the 5th anniversary of our 3-2 win over Hull City in the 2014 FA Cup final. The game had started so badly for us, but Cazorla started the comeback with a magnificent free kick, before goals from Laurent Koscielny and Aaron Ramsey ended our trophy drought.

Given the day that’s in it, we might as well watch the highlights, and well done to Santi, what a man!

Considering he never said goodbye, is it wrong to refer to him as our player?

Santi will always be a Gunner to me.

Leno me, I’ll be your friend
Reply to  shokim

Can we recall him to the Arsenal squad…?

Oh santi cazorla! Such a shame he didn’t win the quarters. Would have been nice to see him again at the Emirates

A Different George
Reply to  Djgooner

I think if we had played Villareal, Santi would have broken the record for an opposing player having his name sung.

That’s frankly amazing. What a story. Congrats Santi.
That Hull final will always be the Santi final for me: without that free kick we were dead & buried.

sambo
Reply to  Kwame Ampadu Down

He’s just one of those players you can’t do anything but love. Always has a smile on his face, can do anything with the ball with either foot. Absolutely fuckin delighted for him.

Absolutely delighted for Santi. Him and Rosicky are probably my two favourite players of the last 10 years or so, would’ve been amazing seeing them with a sustained run playing together

Yeah, but that bunch had plenty of likable players – Kos, Nacho, Per, Arteta, Sagna, Giroud,…

I thought I was the only one who felt that way….so this is what it feels like when doves cry ?

Great news for Santi and an incredible achievement. Think I speak on behalf of everyone here when I say how gutted I am we didn’t hang onto him as he’s clearly still got it!

Nah, the likes of Santi and Wilshere are simply good enough for the ingenious new structure at the club.

i find this story while lovely for him , a bit depressing in the context of arsenal, it seems to play into a sense like Ramsey, wellbeck, wilshire and others that for one reason or another we are constantly wasting players or potential transfer fees. We could have done with him this year but all we heard last year was he’d never play again.

I just got all wistful at the mention of Arsenal in a Champions League game.

Congratulations. Big statement of the guy from the nation to get a recall after his forced hiatus.

Is it bad that I want him back at Arsenal, even if it’s a season or two loan? Or even just preseason. I miss that guy in our midfield and as a team character.

Why did we not give him a new contract?

Because this is “our moment”, “one process”, and we’ll be the “best club in the world”, thus no space for deadwood.

The PL is too intense. His move to a lesser physical league probably attributed to his recovery.

We kind of did. He was injured in the end of 2016, then in the summer of 2017 Wenger activated the option in his contract for 1 more year, until summer 2018. He never played that year, but, boy, that was the right thing to do.

Cazorla is easily my favourite player of the Emirates era, such a joy to watch, and I’m in little doubt we’d have won the title in 2015/16 had he remained injury free.

I’m really not in favour of any type of nepotism as a general rule…. but I really hope we bring him back in a few years time in some capacity.

A magician! That free kick….

So happy for him .. one of the most lovable blokes in football. A bit bitter he isn’t here with us , we sure could have done with that quality but it is what it is.

I fear our dear Santi is “just” the sub for some Spanish starters who want to be on vacation now and to avoid senseless friendlies.

Thanks Blogs I enjoyed that!

I don’t know what exactly makes an Arsenal player “a legend”, but if it is the love from the fans, then Santi is legend for sure.

Leno me, I’ll be your friend
Reply to  Bai Blagoi

Santi is like fine wine that gets better with each passing day….nothing but love for him.

All the bloody players we stuck with through bloody injury over the bloody years and HE had to be the one where we decided to cut our losses and let him go.

I love Santi, but this is revisionism. We kept Santi for a very long time when he could not play and there were decreasing prospects that he would ever play again; we even extended his contract. Some people complained about that (blaming Wenger), just as they complained about keeping Diaby, Rosicky, and Wilshere. I doubt very much that Santi could play in the Prem now. We did the right thing for him and for the club.

What a fucking inspirational guy he is. Probably my favourite Arsenal player of the last ten years.
Wish we’d had him this season. I’m sure he would’ve been very handy. I understand why he didn’t get the opportunity to carry on but I think he could have contributed a lot.

It’s my birthday also, thank you very much!

I bothered to follow villareal this season because of Santi and I was amazed at the amount of game time santi got. He not only handled the physicality and challenges in the LA liga, he also was very productive. It was like he never aged. An absolute joy to watch. I still feel sad we didn’t take one more chance with him although I understand the rationale behind our letting him go at the time. Santi totally earned this call to the Spanish team purely through hardwork, dedication and talent….nothing sentimental about his call-up. Congrats santi and my very best… Read more »

Exactly the same reason I followed Villarreal CF this year too. After that brace against Real Madrd at the Ceramica in January I was sold. Not to mention the role he played in the 4-4 draw against Barça later on. And now getting called up for Spain? He’s still got at least a couple good years left in him, at Villarreal if nowhere else. Endavent groguets!

This ingratitude shown by Arsenal bosses towards some of their injured players must stop! Looks like they readily dispense off the services of their players as soon as they are seriously injured: Santi Carzola, Theo Walcott, Oxlade Chamberlane and currently Dani Welbeck. It is a big, big shame!
As long as Arsenal keeps discarding their players in that way, they will keep wallowing in the cesspool of mediocrity.

Did you complain about Diaby who remained on Arsenal wages through 2 years of injury hell?

I am not complaining; just refusing to behave like an Ostrich – when there is a real problem-burying my head in the sand. Diaby, Wishire, Rosicky etc. shouldn’t have been dispensed with as well.

Are you trolling? Never heard of RVP, Diaby, Wilshire, Eduardo?

Wilshere rather and Rosicky?

Wow, just when you thought you’d read the book on stupid. Thank you.

Sooo happy for Santi he deserves it and more

This honestly brought a lump to my throat. A fabulous player – and an even better human being. Absolutely love him. Well done Santi. Knock ’em dead.

King of the West

I almost fell into tears my self. I love the man, and I love the love you people have for him.

I bet everyone was feeling so impatient until minute 2:28. Those first two and a half minutes felt like an eternity

Bloggs – you are a gentleman for putting this in the news. This story makes us happy. I hope Santi knows the affection we all have for him.

The Man City away game in the 2015/16 season has to be my favourite Santi Cazorla game. It was arguably the best individual performance by any player in the league that season but, almost certainly the best performance by an Arsenal player that season. Santi made that star-studded, mega-bucks team look like rank amateurs. https://youtu.be/iLgHu41F5dw

As if I missing santi isn’t enough to make me blue….. The song almost made me cry ?

What an amazing story.

Like Abou Doaby, an absolute legend!!! Bet he won’t ” retire from Intenational Football” because he is bigger than that, realises how a career can be cut short, how lucky he really is as a Professional footballer and is truly humble. Other footballers could learn from Santi!!!

We have yet to replace the capability he brought in midfield. Wenger rather successfully reconfigured him from the wing into a deep position in midfield. And he could control the ball for us with his ambidexterity. Viera use to do the same in a more physical combative way, Diaby was a mix of both (a great tribute to the almost man on the main Arsenal Website /Player BTW) But we have missed this sort of control for a while now. We lack someone calm and in total control in midfield that can carry the ball for us up the spine.… Read more »

Nothing more than he deserves.

It would have been amazing if he made this comeback in an arsenal shirt, but it still makes me so happy to see him playing again

I could watch that clip 100 times, and I’d have a huge grin for santi’s goal every single time.

Cazorla he is unforgettable player for Arsenal fans.