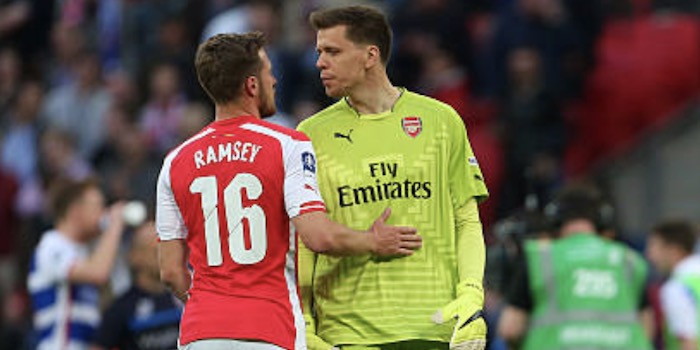 Wojciech Szczesny has promised to take care of Aaron Ramsey when he comes to Juventus this summer.

That’s in the ‘look after’ sense, and not the wise-guy sense, after the former Gunner revealed that the Welshman had sought advice after a move to Serie A at the end of his Arsenal contract.

The pair were obviously teammates in North London for years, and Ramsey received a glowing recommendation from Szczesny about life in Turin.

“We spoke to each other a couple of times before he signed with Juve this winter,” he said.

“He asked me for some advice, I told him: ‘It’s all clear, if Juve calls you you can do nothing but say yes”. In the end it went like this and it means that Aaron listens to me!’

“He had 5 months to prepare and he can already get along a little bit [in Italian]. When I took him to dinner he said more than just a ‘hello’.

“He partly understood and this is already a good basis. I’ll take care of him.”

And Szczesny is in no doubt that the new arrival will be a success at the club he’s joining for free.

“He will be a great player for us,” he continued. “He is a midfielder who gives a lot of quality, very good at positioning and he scores a lot of goals and provides a lot of assists.

“When he is physically fit, he is one of the strongest and he will give us a great hand to try and reach our goals.”

Whether or not you think they were a good fit at Arsenal at the time, can’t fault the personality of these two. Seem like really decent blokes

THE caveat ‘when he is physically fit’

Me too, my fear for them is Allegri out, Mourinho possibly in.

And we let them go, that sucks…

I’m sorry Wojciech, Ramsey has many qualities but that is exactly what he ISN’T very good at (IMHO).

Show me one goalscoring midfielder who‘s always in the best position defensively. That’s nonsense and only comes from people who still, after 11 years, haven’t understood what Rambo‘s strength is. It’s his positioning in the final third. His runs in behind. His engine to make these runs again and again and again. His intelligence to spot spaces where the defenders aren’t aware of. If you’re such a player it’s impossible to always be in a good position defensively. I really don’t know what’s so hard to get about it.

Did I say “defensive positioning”? I’m referring to his tactical positioning and discipline and use of the space that he is (nominally) supposed to take up. Have you noticed how often he gets into the way of teammates, literally running into them, because his running patterns are quite random. He may well spot those spaces you talk about, but occupies them without any consistency or method, which quite often made well-rehearsed attacks break down. He also doesn’t press in a disciplined way, although nobody under Wenger really seemed to be coached to do that. If you are referring for example… Read more »

He is good at running but not positioning