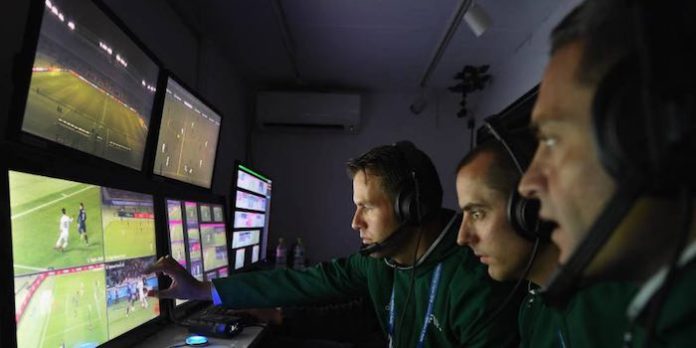 UEFA have confirmed that VAR will be used in this season’s Europa League final.

The technology has not been a feature of this year’s competition, although it has been in the Champions League, but for the Arsenal v Chelsea showdown in Baku on May 29th video will play a part.

The officiating team for the final was announced yesterday:

In Serie A this season, Rocchi has handed out 124 yellow and 6 red cards, and has reffed both Arsenal and Chelsea numerous times in European competition in the past.

He was in charge of last season’s Europa League semi-final second leg against Atletico Madrid, and the 5-1 defeat away to Bayern Munich in the Champions League, but also the man in the middle for a 4-1 win over Galatasaray in which Danny Welbeck scored a hat-trick.

Which is quite the coincidence as that’s what Welbeck is going to do in Baku, coming off the bench to DELIVER A KANU to Chelsea off the back of three Aaron Ramsey assists.

Apart from slowing the match down, good news (especially if it works in our favour).

Good, it still needs work but for matches as big as this it’s vital to give the referee all the tools to get decisions right

Sok might have to watch his grappling I guess

I’d even be a bit worried about Sokratis too, he likes a shirt pull once in a while. Curious if Chelsea play Giroud or Higuain up front.

The are not exactly playing Burnley, so Higuain is likely to lead the line, behind Hazard and Willian. I expect Giroud will be brought on to wrap things up, once they’ve obtained the 3 goal cushion

If you say so. But Giroud has started all 8 games for them in the semis, quarters, round of 16, round of 32. He gets picked for Europa games the same as we pick Cech ahead of Leno. So that’s why I’m curious if Giroud or Higuain get the nod for them.

It’s a good question, but it’s difficult to answer because I don’t know whether in Europa League Sarri tended to choose Giroud over Higuain for tactical reasons, or simply on the basis of form (Higuain has been in poor form for two years now, since his move to Milan). Has he used Giroud over Higuain in the league too recently?

Giroud has been one of the very best in the competition this year. There is no chance he stays on the bench.

I think the guy who has to worry about VAR on corners and free kicks is David Luiz. (And one of Mustafi’s worst moments of the season, conceding the penalty by pushing Kane, would have been eliminated by VAR for offside. Though, in fairness, Mustafi had a couple of others.)

Sokratis would have had several reds and penalties against…unless you are blind…which is why VAR may not be a blessing.

Mustafi is actually OK compared…watch again, use your own VAR unless you are lazy like most people who like to blame Mustafi…

Or Kolasinac who loves a hug

Italian officials; does that mean Sarri and Zola are gonna be in the ear of the ref and the fourth official during the whole match, giving it large in Italian?
Cue Emery speaking in Italian like Brad Pitt in Inglorious Basterds.

But I don’t speak Italian???

Steve Bould definitely has the third most Italian.

Just like Italian, Spanish is a Latin language, so he probably speak better Spanish than he does English !

As someone trying to learn both, I can tell you they are surprisingly quite different.

Is Wellbeck even in our Europa League squad?

Didnt he get his injury in a Europa League match?

I think that was a joke. Much like I’m sure no one expects Ramsey to score a hat trick.

Of course not – that’s ludicrous to expect Ramsey to score 3. As it clearly states, Ramsey will get 3 assists on Wellbs hatrick!!

And some bastards scheduled a work meeting for me at the time of the final. Might need to pick up some sort or virus that morning.

good idea to have an odd pain somewhere and slip off to watch the match!
to be honest, if you felt any guilt about it, just think you’re ‘doing an Ozil’

Ya but you update the squad after the Jan transfer window.. I don’t think he is in it

Well this will highlight every halfway line foul by our very own “fall over/foul the player because I’ve been done yet again….Mustafi flappy waffi

Hopefully will stop Harzard writhing around in the penalty area like he’s been shot if touched.

Does it worry anyone that there is an all-Italian crew reffing the game? Sari is Italian and we know that they all know one another!

A Different George
Reply to  adhphd

Yeah, if only Mike Dean were the ref.

No. The best teams now have a mix of nationalities so you’d be hard pushed to find a ref that doesn’t share a birthplace with somebody.

Look on the bright side–maybe they all already hate Sarri from their experiences with him in Italy!

I hope the use of VAR will somehow result in John Terry being shown a red card. I don’t know why or how, but I’m still hoping for it

VAR apparently also used for City’s financial dealings…may get banned for a year from CL…which may mean we may get in even without winning europa.

Of course this highly dependent on (as someone at Watofird would say) how much cojones UEFA have since they have yet to take major action against PSG.

I see your hazard’s last game and raise you Cech’s last ever game. Cech’s going to have a blinder saving everything because he has a magic hat ?