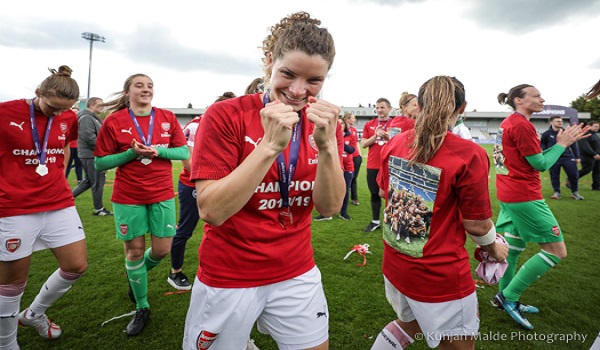 Dominique Bloodworth (nee Janssen) joined Arsenal in the summer of 2015, fresh from Netherlands World Cup campaign in Canada. At 20 years old, the versatile Dutchwoman had a reputation for reliability in all positions across the back four and as a defensive midfielder. She played principally as a midfielder at Arsenal, but she has also been used in both full-back positions and as a centre half.

Bloodworth is renowned for her keen distribution with both feet and her ability to shield the ball in tight spaces. Her two footedness gives her an edge over opponents unable to show her onto a weak side that she doesn’t have. Minutes after her final game for Arsenal- her 100th club appearance- Dominique tells me that consistency is her proudest achievement across four years in North London.

“I have grown as a player here, I produce more consistent performances now. At the beginning I was inconsistent and that’s one of my biggest achievements since I have been at Arsenal. I am very happy and very blessed for everything Arsenal has done for me.” Bloodworth came from Essen in Germany, signed by former boss Pedro Losa, who had been impressed with the 20-year old’s mature performances in the 2015 World Cup in Canada.

But Bloodworth says she still had plenty of growing up to do when she moved to London. “I remember coming here and I was just a little girl really. I had played in Germany but that was still close to home, so this really felt like the first time I had come abroad. Being away from my home and having to find my way and my style of play and my personality, I feel I have really grown up here. I came here as a girl but I have become a woman at Arsenal.”

Dominque has produced another excellent season for the Gunners, starring in both full-back positions when injuries to Jess Samuelsson and Emma Mitchell took hold. She also played at the centre of a back three on numerous occasions where her ability to caress, tickle and wallop the ball across the pitch has been a huge asset for Arsenal. Her performances began to draw attention and, over Christmas, German giants Wolfsburg, who have won the last 3 Bundesliga titles and helped themselves to 2 Champions League titles too, came calling.

“I heard from Wolfsburg in December, I heard they were interested and they wanted to know at short notice if I was interested or not,” Dom reflects. “I had to think about the best choice for myself and list out the pros and cons.” Bloodworth admits that moving away from London, especially, made the decision more difficult. “It was a really tough choice because it is really easy to live in London, there is a lot around here, whereas in Germany, there is probably less.

“But I had to look at how it would help me on the football side. Wolfsburg is one of the biggest clubs in Europe, it was an opportunity I couldn’t say no to. I thought that I just had to go for it and I will see how it turns out. I am very proud of this move, I have worked very hard, so all I can do is look forward to the opportunities that are coming.” Though leaving London is a wrench for the player, she says that she feels very at home in Germany.

“I really like German culture, English and Dutch people are very different, whereas Dutch and German people are a bit more similar. So it’s not a difficult adjustment for me. I have played in the Bundesliga before and I really enjoyed my time in Germany.” Lots of players are moving from the Bundesliga to England. In the Arsenal squad alone, Tabea Kemme, Viki Schnaderbeck, Vivianne Miedema, Lia Wälti and Lisa Evans have moved from the Bundesliga to the WSL since 2017. Dominique is travelling in the other direction.

Right in the feels… ?

But Bloodworth still sees the Bundesliga as a very strong league which, multiplied by Wolfsburg’s pedigree in European competition, meant going back to Germany makes sense for her on a professional level. “England is a league that is really growing and players want to come here because England is a football country, but the Bundesliga is an amazing league and it is still pushing to grow.”

Dominique’s Arsenal tenure could scarcely have finished more perfectly, with a 1-0 win over Manchester City in her 100th appearance for the club, a day topped off by having the chance to hoist the WSL trophy. “It was a weird week preparation wise, because we’ve already won the league and we could have taken it easy. But Joe gave us the normal, proper preparation. And we really wanted to put the season to bed and make it clear that we are deserved champions. It was my 100th game today too and it really is the perfect way for me to finish.”

Dominique shared her send-off with international teammate Sari van Veenendaal, who kept a clean sheet in her final game for the club. van Veenendaal signed for the Gunners at the same time as Bloodworth and Dominique says that sharing her special day with her friend and compatriot added another layer of gloss to the occasion.

“Sari is a bit older than me and she has taught me a lot. She has helped me to grow into the woman I have become. I am proud that we came here together, we didn’t know each other that well, but we became very good friends really quickly. We’ve relied on each other and had a really good time at Arsenal and we learned and grew a lot. It’s so special that we can share that feeling today.”

In 4 years, Bloodworth has 100 appearances, 2 Conti Cups, an FA Cup and a league title, as well as forming a core part of the Dutch side that won Euro 2017 on home soil. When I ask her to summarise her time at Arsenal, Bloodworth reverts the to the phrase she used at the beginning of the conversation. “I came here as a girl and I am leaving as a woman.” She arrived as Dominique Janssen, player of potential. She leaves as Dominique Bloodworth, seasoned performer and league champion.

For a chance to win a copy of Saturday’s 52 page champions special programme signed by Dominique, just answer the following question.

Dominique is leaving Arsenal for Wolfsburg, but from which German club did she join Arsenal in 2015?
a) Essen
b) Bayern Munich
c) Potsdam Turbine

Please send your answers to [email protected] with ‘Dominique Bloodworth programme’ in the subject line. All answers in by Friday, 17th May please. The winner will be chosen at random.

She is the type of player who would cost over 100 million if she was in the men’s game. Truly wonderful player who I have been underrating for so many years, but I have now seen how amazing she is as a player.

I have been using clips of her and some of her national team performances to teach my young players how to play as a central defensive player, whether as a defender or midfielder.

She will definitely be missed, but at least we have Viktoria Schnaderbeck.

Yeah I think the use of Viki in midfield was instructive on Saturday. There is a midfielder coming in from Bayern, but more attacking than Dom. With Lia injured for the first part of next season, that’s going to be an issue.

Who is the midfielder coming in from Bayern–Roord? I heard that she and one or two others (defenders) from BM might be joining Arsenal. Roord is an attacking mid but I don’t think she played a lot for BM–she was not a starter. She is young and has quite a bit of potential–but do the Gunners need an attacking mid when they already have Van de Donk and Nobbs? And Little certainly knows how to get forward and score as well. Scoring goals was not at all a problem for Arsenal this year–they led the league in goals, I believe.

Yes, it’s Roord. One of the others from Bayern is a defender, the other isn’t though.

With the league getting tougher next season with two big teams coming up is there plans to replace Bloodworth or are we going for the famous internal solutions? If you could pick a player to replace her who would it be?

Congratulations Dominique on your achievements at Arsenal Women. It’s been a huge pleasure watching you grow up during your time here. Best wishes at Wolfsburg.

She has to have one of the best names in football, should be a Bond villain

Shame to see her going but perfectly understandable given Wolfsburg’s pedigree. Given her age she probably hasn’t even hit her prime yet, which is a bit mad considering how good she’s gotten

Excellent piece, thank you. I hate to see Bloodworth leave the Gunners–she is not flashy but one of the most underrated players in the game, IMO–extremely solid at multiple positions. I’m a bit surprised by her decision, frankly, as Arsenal is a very strong club right now and could be even better in the next couple of years–a threat to win the Champions League, I believe. And, too, the WSL is a better league than the Bundeliga, and will be even stronger in the years ahead. But Wolfsburg is a big team, and she likes German culture, as she says–and… Read more »

I also think she wants to play in midfield, whereas Joe still sees her as a defender when Lia is fit. She made the decision to go when Lia was fit and playing every game, so I think that was factored in.

She have the most amazing surname ever.

Good luck Dom. You have been fantastic for our Club and will be missed from the group.
Can’t understand your motivations for leaving but there again why should a spectator need to understand!
Happened to be sitting next to Mr B on Saturday, seems like a nice chap but I think he got a wee bit embarrassed by the multi compliments about you from those around and the inevitable questions about your departure.