Burnley 1-3 Arsenal: By the numbers

Arsenal didn’t have a ton to play for Sunday, but that actually made for a relatively relaxed viewing experience. Realistically an 8 goal difference swing was never likely (my simulation model had it at 0.02% or 2 out of 10,000 times) and the difference between finishing 5th and 6th in the grand scheme of things is pretty small.

In the end Arsenal got their win, that other team got a draw to take 4th place by a point and Manchester United fell on their face, at home, against a relegated Cardiff City.

It was a a nice ending to an up and down Premier League season with the Europa League still left to look forward to in a couple of weeks time.

Burnley 1-3 Arsenal: By the graphs 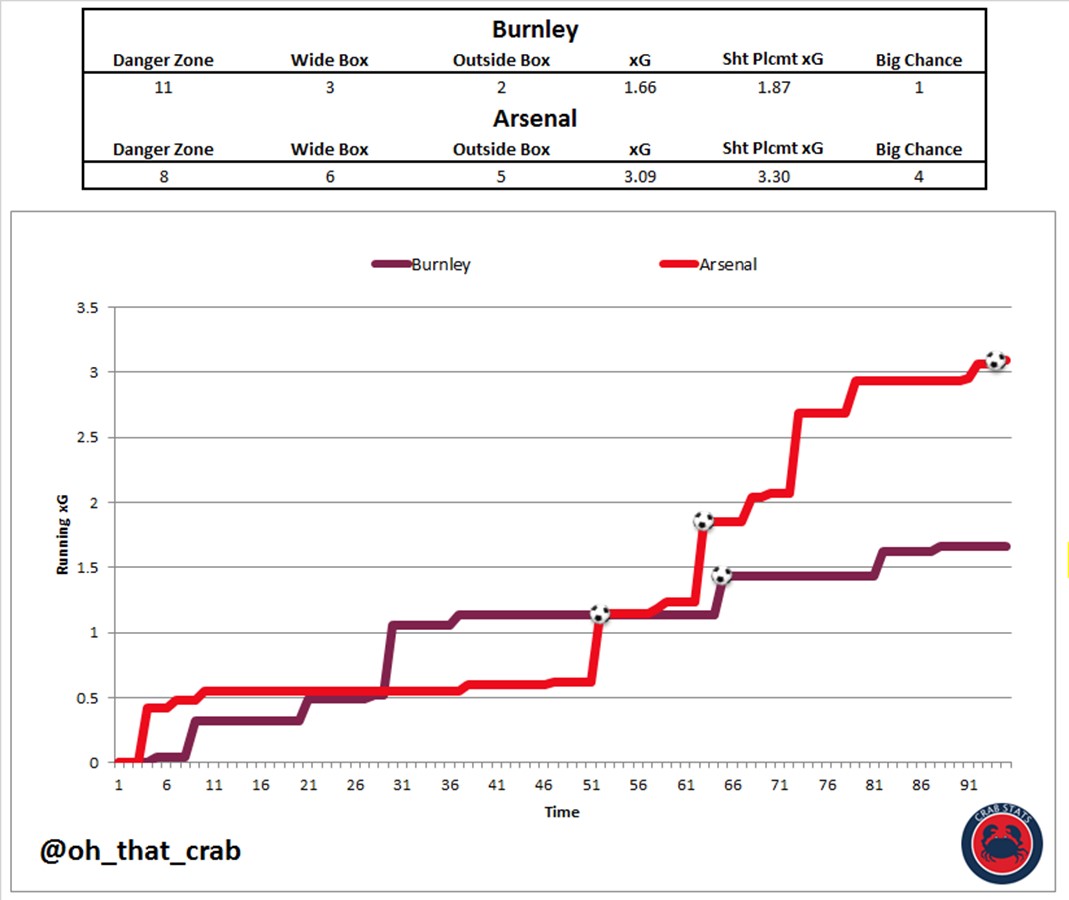 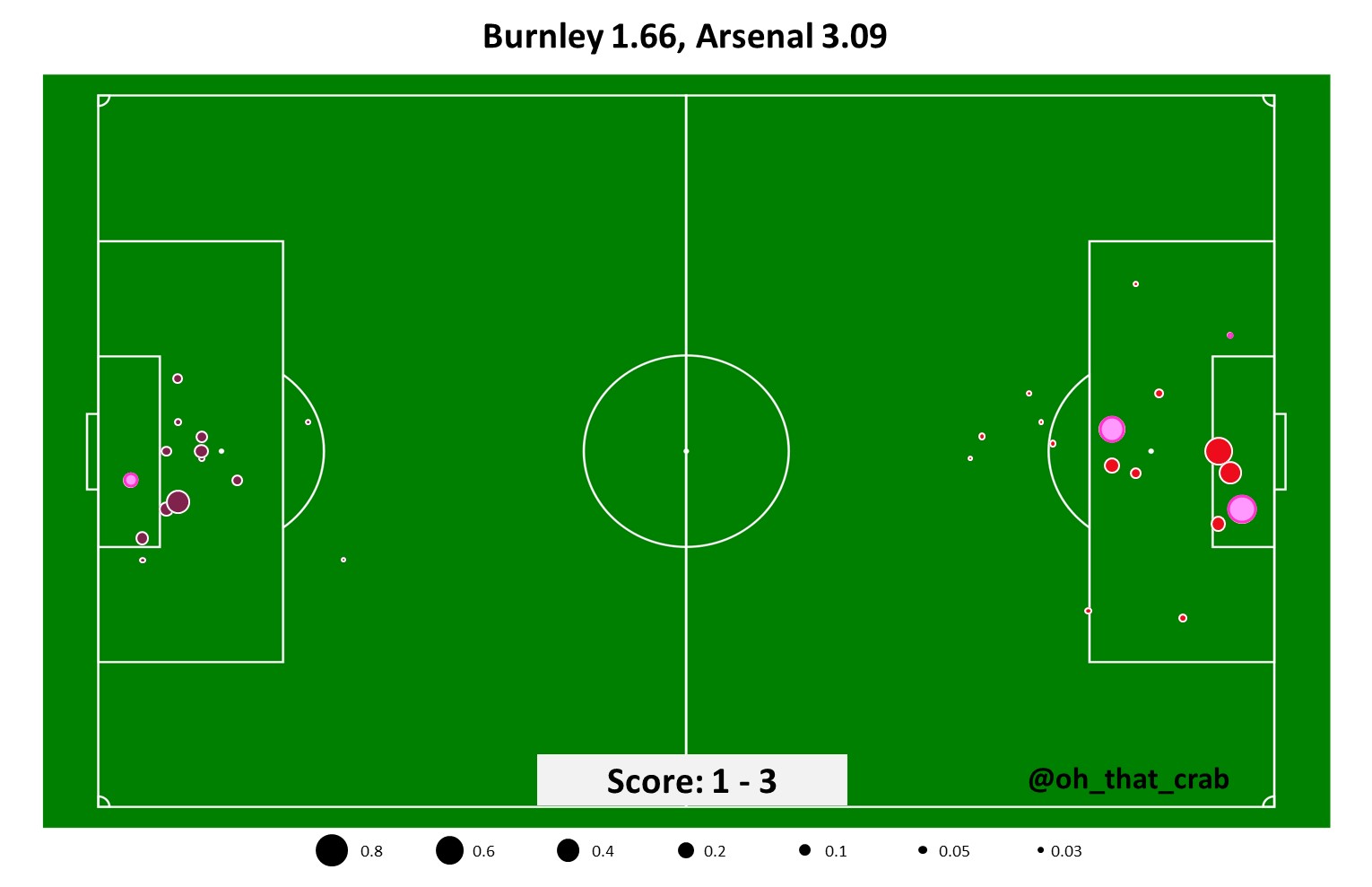 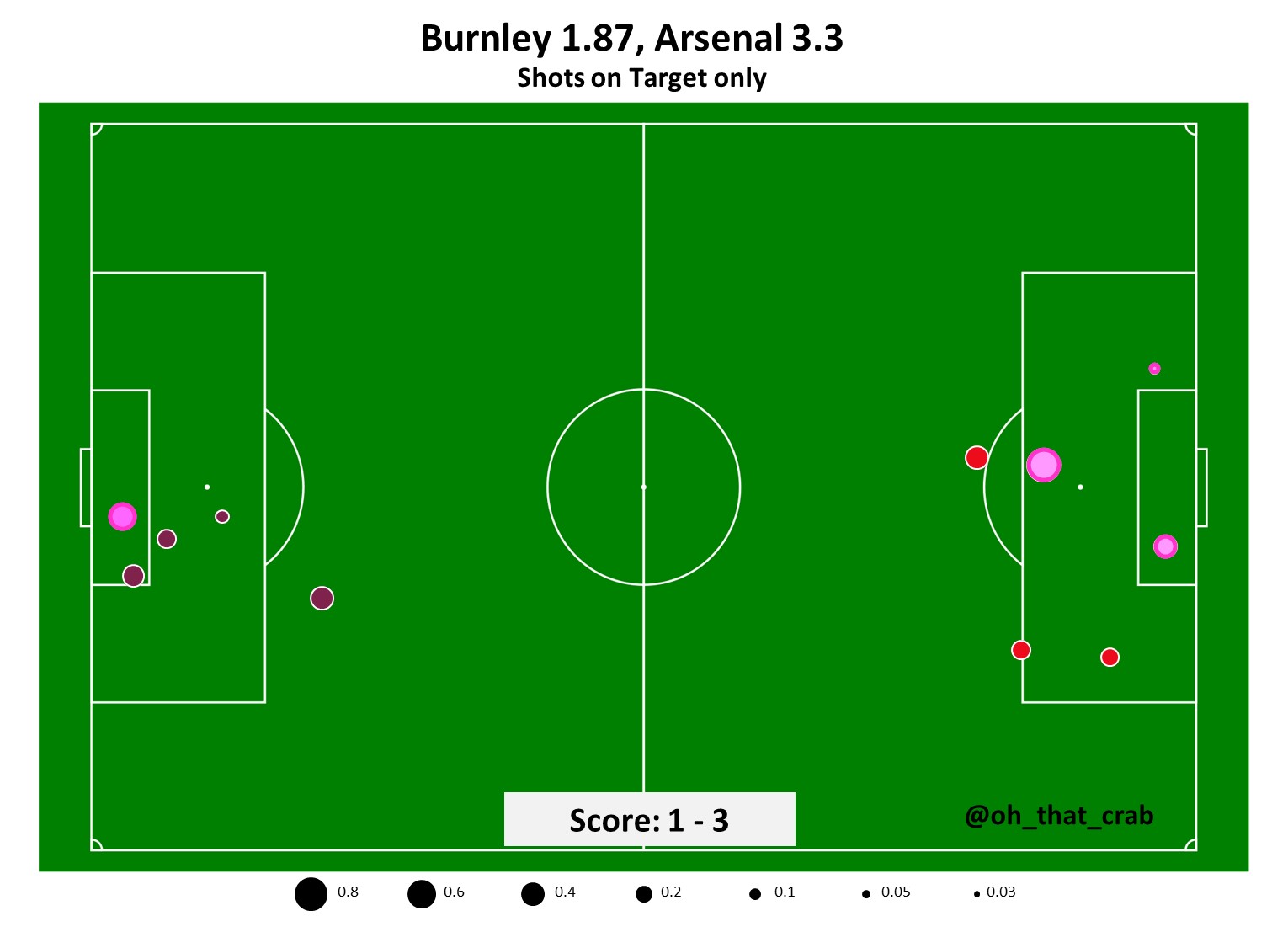 Simulated Match based on shots 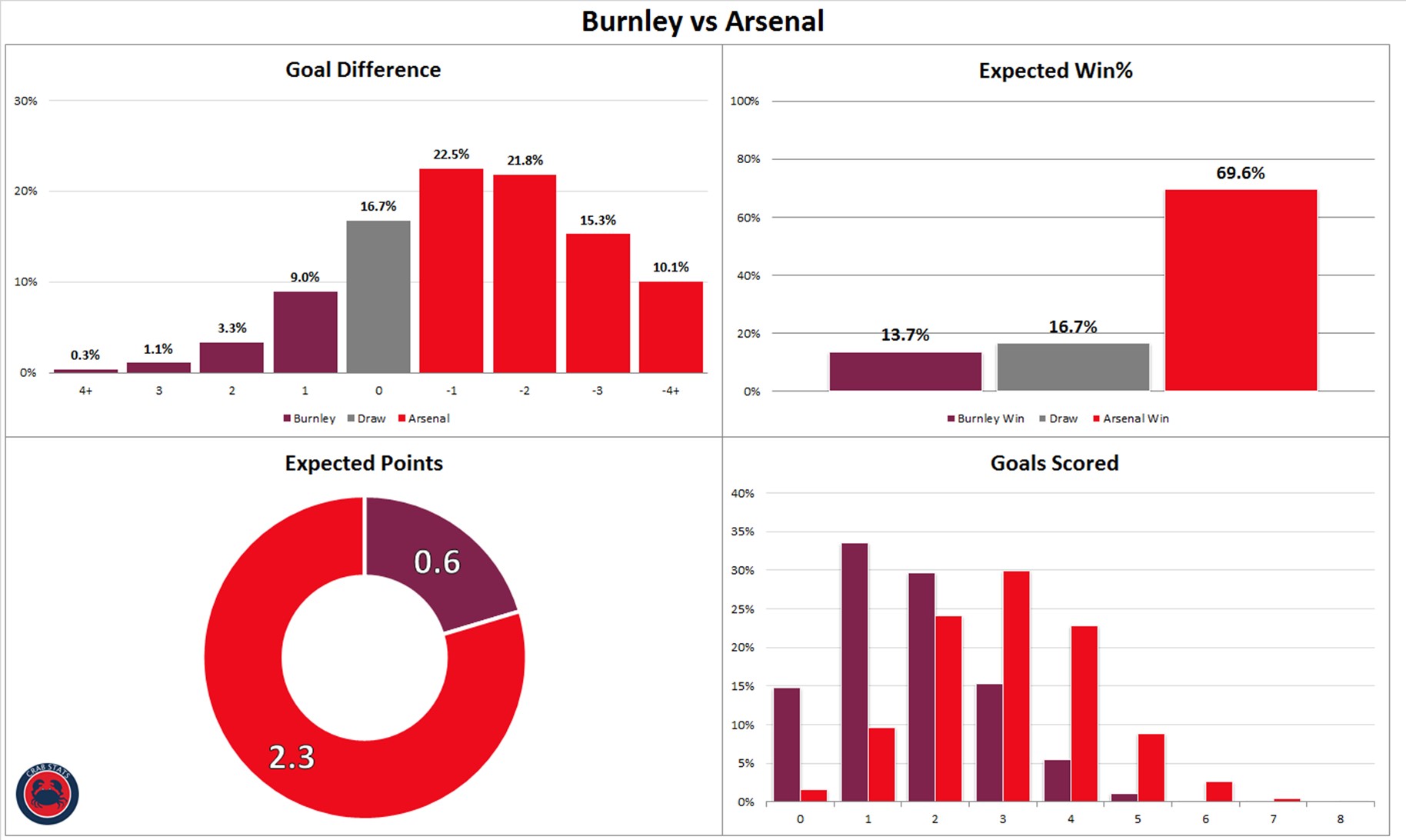 Burnley 1-3 Arsenal: By the numbers

96% – Completion percentage overall for Elneny, with 63% of his passes aimed forward.

It was a classic Elneny game where he is good but you aren’t sure he is quite at the level required for Arsenal.

5 – Clearances by Mustafi including one off of the line. His 5 was good enough for joint 2nd on Arsenal behind Laurent Koscielny with 7.

2 – Tackles by Mustafi, second most on Arsenal. He even added an interception and two blocks.

This is the good side of Mustafi. He can be a frustrating player where he has very good games, mixed with some absolute garbage fire games. Over the course of the season his performances probably average to a 6.5-7 kind of player but you would really like a more consistent player that gives you a 7 out of 10 every week vs one that will give you an 8 one week followed by a 4 the next next.

5 – Chances created by Alex Iwobi, led all players. He also created two assists in the match from 1.00 xG assisted.

29 – Final third passes completed by Iwobi at a 87.8% completion percentage, led all players.

2 – Big chances created by Henrikh Mkhitaryan, led all players. He created the best chance of the match but couldn’t end up on the score sheet with an assist.

8 – Inaccurate crosses by Mkhitaryan, led all players. Created some two great chances but also had quite a few not create anything.

12 – Defensive actions by Iwobi and Mkhitaryan overall in this match.

It doesn’t maximize the personnel that Arsenal have but playing with one striker, flanked by two wide forwards does always seem to lead to a more balanced team for Arsenal. If Arsenal’s two strikers didn’t play as well as they do together you could see this front three as the first choice. Improving the options for wide players to make this a viable option next year will be an important task for Arsenal in the summer.

7 – Shots for Aubameyang in this match. This was the highest total that he has had with Arsenal in the League this season.

4 – Big Chances for Aubameyang in this match.

50% – Aubameyang’s big chance conversion in this match. League average is about 40% for these types of chances.

2 – Goals in this match for Aubameyang in this match to tie Mo Salah for the most in the League and to keep pace with Sadio Mane.

18 – Non-Penalty goals for Aubameyang this season, 4th among all players in the Premier League.

19.7 – Non-Penalty xG for Aubameyang this season, led all players in the Premier League.

22 – Goals for Aubameyang this season.

23.6 – xG for Aubameyang this season, led all players in the Premier League.

You could tell that Aubameyang badly wanted to win the Golden Boot and he got the two goals that he needed against Burnley to get him a share of the goal scoring lead. It was a deserved title for him as he was for the leader in getting on the end of chances for most of the season. If he hadn’t gone through a cold finishing run in the middle of the season he very well could have ran away with this title.

People can be frustrated with him for missing some “easy” chances but that will always be par for the course with Aubameyang. At this age and with his track record he isn’t likely to become a clinical finisher but his ability to find space and get on the end of chances looks likely to have him continue to get a high volume of these chances where a few more misses than expected don’t hurt nearly as much. 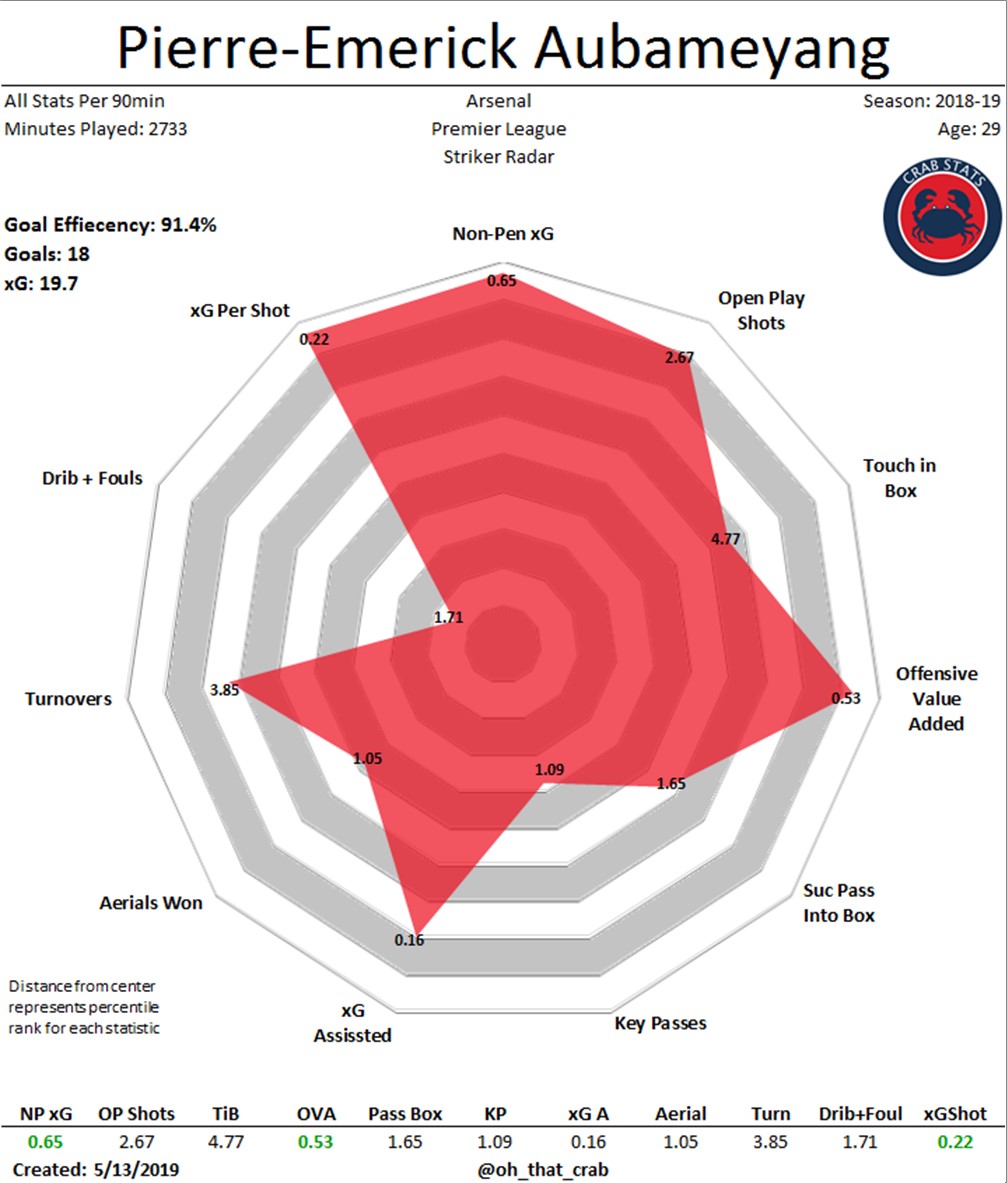 As we saw with the tie against Valencia having an elite striker (plus another very good one in Alexandre Lacazette) can cover up for a lot of other flaws in a team. Arsenal are not a balanced, well constructed team but having Aubameyang this season did a lot to give Arsenal a chance at finishing in the top four and a match away from lifting a trophy.

Sources: Opta via WhoScored, Understat, StatsZone and my own database.

Previous articleAubameyang: I bless the goalscoring rains down in Africa
Next article‘I Came Here As A Girl, I Am Leaving As A Woman’ Arseblog Exclusive with Dominique Bloodworth

This game was a really nice watch and seeing Willock play for such a sustained amount of time was really nice considering Charlie Gilmour just announced his departure. It got even better when Eddie came on for Willock and he didn’t do much wrong in his time on the pitch, even grabbing a much needed Goal after all the performances he has had this season. Eddie is a fantastic talent, and that has seemed to weigh heavily on him to the point where he was making the wrong decisions in games in order to grab a goal. The game was… Read more »

Nah. This last game just pissed me off. Only proved just what absolute bottlers we are.

I think its more the missed opportunity that pissed you off, rather than the game. i mean, its a deserved win away from home, its one of our best results this season, unfortunately everything that preceded it was utter rubbish.

It was more the fact that we effortlessly won a tough away game when the pressure was off.

It just proved we can win these games easily. We just don’t have the cojones.

Unrelated query: If City are banned from Champions League for next season (as stated by some reports in the media), can we get that qualification place for UCL then?

Its a big ‘if’, I know, but the prospect is exciting.

Unlikely that they’ll be banned in time for next season’s UCL, even if a ban is eventually given. They’ll appeal, then appeal again, and by the time it’s settled, they’ll already be playing next season’s Champion’s League.

Even on the off chance they are banned (definitely a possibility, it was reported by the New York Times so it has plenty of credibility), they will need someone to fill City’s spot. Not sure if it’ll be given to 5th place in EPL, FA Cup runners-up, or a team from another league entirely.

Not something I’d hang my hat on.

A Different George
Reply to  CuriousGeorgeGraham

There is no chance it would be given to FA Cup runner-up; that is not a basis for either European championship. The FA Cup winner qualifies for the Europa League group stage but, if already qualified for either European competition on another basis, that spot goes to the next highest finisher in the league, not the cup runner-up. (Analogous rule for League Cup winner, though at qualification rather than group stage of Europa League.)

If only Abu scored that penalty against spurs…..we would finish above spurs, and Abu would have the golden boot to himself………if only…..this summer will suck if we don’t beat Chelsea….

I thought it was particularly fitting that Nketiah got the last goal of the season, willock reminding of us how dangerous he can be and guendozi showing a degree of maturity in the centre of midfield.

i can see 2/3 of those players contributing significantly next season.

It was a really positive away performance from the whole team something just seemed to click and they played with high tempo, didnt let Burnley bully them while still stringing a few passes together. Even the most picked on Mustafi,Iwobi, Mkhitaryan and Elneny!! All managed solid games with Burnley definitely not at the beaches. Why has this type of performance been missing from our run in? Left me feeling very frustrated at what could of been but also confused as to how we managed to play so well away at Burnley of all places while folding up and playing so badly… Read more »