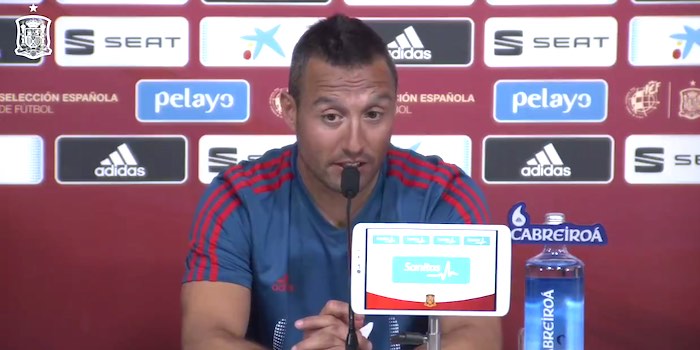 Santi Cazorla says that he still feels the support of Arsenal fans, and it pains him that he was never able to say goodbye from the pitch.

The Spaniard played his last game for the Gunners in October 2016, then spent a horrendous time out with injuries, meaning that he was never able to pull on the red and white shirt he wore with such distinction again.

Now, after a fine season at his ‘home’ club Villarreal, he’s been called back into the Spanish squad for their upcoming games against the Faroe Islands and Sweden, and spoke at a press conference today about his comeback.

“I’ve always believed in being able to recover,” he said. The people who worked alongside me made me believe this. We have to face things with optimism. I have taken many positive things out of my ordeal.

“There have been times when I thought I’d throw in the towel, but this was a background detail. I could get through with the help of my people and now I’m  trying to enjoy every moment.”

Reflecting on his time in North London, he sounded wistful that was unable to say a proper farewell.

“It was nice there,” he said. “I have always noticed the affection of the Arsenal fans.

“If I have taken something from there, it is the affection of the fans and the worst thing is that I was not able to say goodbye to them on the pitch.”

Sure as hell do miss this guy.

Him and rosicky… damn these effing injuries

Believe you me, it sucks for us too. I sometimes wish that we could have offered him one last extension but then I wonder how well we would have managed him and whether he’d have ended back in the Spain team.

Jack but
Reply to  Carlos _ Santana

It will be wonderful to sign him up at least for a season.

He would still be our best player today.

We miss a transitional midfielder like Santi so bad right now. His ability to spark attacks from deep is a characteristic we should absolutely be looking for in the market this summer.

Amazing to see him back on his feet and playing great football again. A happy story in a world that can seem very doom and gloom when things aren’t going well.

This man’s injury started the downfall of the Wenger Era. We didn’t have a replacement for what Santi offered and how could we? There’s only one Santi!

The truth in this is heavy to bear

Arsenal sad to have said goodbye to cazorla..

Santiago!!! I will never forget that free kick against Hull City at Wembley.

Always felt confident when this guy was on the pitch. Sorely missed.

We miss you too, Santi. Hopefully the management can arrange a testimonial for him someday.

Fancy your old job back Santi ?

I’m sure we all feel the same, no?

Love you too SC! Will never forget that FA Cup goal…..

One of those players who rarely failed to deliver, and everytime he had the ball there was a good chance of witnessing some magic.
However like a lot of Arsenal players he had his career at the club littered with nasty injuries.
He will always be remembered fondly, but imagine if he had stayed 100% fit how different the club might be now.