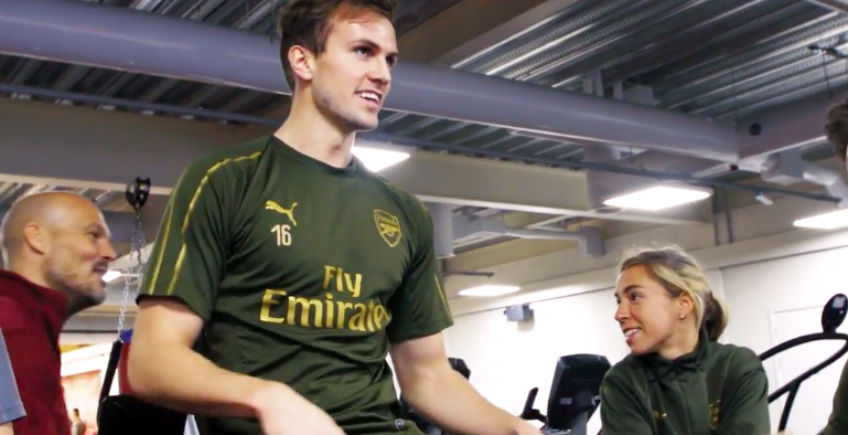 Rob Holding has revealed that he struck up a close friendship with Arsenal Women’s Jordan Nobbs after the duo both suffered ACL injuries within a couple of weeks of each other.

The 23-year-old centre-back hasn’t featured for the first team since the 2-2 draw with Manchester United in early December but should be back soon after the start of the new campaign.

In a new documentary charting his return to fitness, the England under-21 international also touched on the importance of his friendship with Danny Welbeck and Hector Bellerin as they too spent hours in the gym after season-ending injuries of their own.

Holding says he first got to know Nobbs, who sustained her injury against Everton in November and has subsequently missed the World Cup, when the pair were coaching Gunners youngsters at the Hale End Academy but it was the daily contact while both sidelined that saw their bond grow.

“At first, we were just like, ‘This has hit us both at the same time’” Holding says in the ‘Road to Recovery’ documentary. “Then every day, I’d be in the gym and I’d go to the academy gym where she was at, and we’d sit and talk for 10 minutes.

“We’d talk about how it’s feeling, how the knee’s swelling, what’s the next exercise, what’s the plan, when’s your next holiday… I’ve literally just got to know her as a person. I think we’ve really helped each other along this journey.”

Holding also shared that he cried when he saw Hector Bellerin suffer his own ACL injury during the January victory over Chelsea and that Welbeck, who broke his ankle in November and needed several surgeries, played a vital role in keeping spirits high amongst the injured crew.

“I obviously love Hector to pieces and stuff, but I didn’t think I’d cry about another guy’s injured,” he recounted.

“It’s because it was so recent to my surgery, it was literally four weeks after. I knew everything he was about to go through and I just got overcome with emotion a bit.”

He added on Welbeck: “He’s been a massive part of the group,” our defender said. ‘He’s just someone that lifts everyone around him, who walks in and brightens up the room up straight away. Even though his injury is an ankle, he’s like an honorary guest to the ACL rehab crew. We couldn’t do this without Danny.”

Holding started ball work towards the tail-end of the last campaign and will be hoping to build up his strength with the first team when they head on tour to the States next month. Whether he gets game time remains to be seen – it could still be a little early – but his return will be a boost when it happens.

Wouldn’t be fun if they’d make some serious relationship?

He’s engaged and due to be married soon…so no.

And she’s into girls

Really management are missing an obvious next stage in academy development that. Pair off the most talented boys and girls and immediately enrol the offspring in the academy. 😉

no name
Reply to  PeteyB

It called breeding thoroughbreds with Pedigree

All the more reason to love Danny. I’ll miss him.

My sentiment too.I guess this was his last impact at AFC

Gets on great with everybody, an excellent representative of Arsenal values and character.

He’s got it all in his locker too, doesn’t mind mixing it up with the likes of Costa in the big games.

The bromance between him and Chambers may not burn as bright as Auba/Laca but def. a top three Arsenal bromance. Bodes well for the squad to have these two back (at the back)!

Agreed I feel like we have to give him and Chambers a go together.

The men’s team really missed the positive trio of Wellbeck, Holding and Bellerin this season. On the pitch they were missed but in the dressing room the loss was really apparent as the season fell apart in the last few weeks. I imagine the treatment room was a happier place, plus the ever-charming Jordan Nobbs, that’s a really nice group to be around for recovery!
Will miss Welbeck, don’t ever let the other three leave!

Bet he smashed her back doors in. Top lad.

not sure if that qualifies as rehab

We really missed Rob, Danny and Hector the Great last season. Holding was particularly developing into a solid quality centre back.
If anything though it must have been even worse for Jordan Nobbs. She had started the season so well with Arsenal and then missed so much of what turned into a fantastic campaign. She would have been nailed on to play for England in the World Cup. Such a shame for her.

Agreed,,,have you watched her story on the dot.com site? Very moving indeed.

No I haven’t seen that. Cheers for the heads up.

Thank you once again Sharpasfc for pointing me in the direction of the Jordan Nobbs rehab documentary. I’ve just watched it. You were spot on with your appraisal of just how moving it was.

“A dude at work gets to know another dude(ette) at work”.

Should be good enough for Cback with Sokratis plus one more.

Depending on the level of experience and capability we eventually bring in (say an Umtiti), if strong enough, we can sell both Mustafi and Chambers.

If not we should keep whomever has less money on offer in market or whoever is more keen to stay and come off the bench.

Mavropanos we should send on a strong role to seriously accelerate development. He just needs plenty of games under the belt.

Unflappable and good frame as well.

Looking forward to him coming into squad again.

I’d seriously assess Chambers as well. He’s 24yrs still and if both him and Holding can step up, we don’t necessarily need a top top player to replace Mustafi.

Will be interesting to see his participation in pre-season.