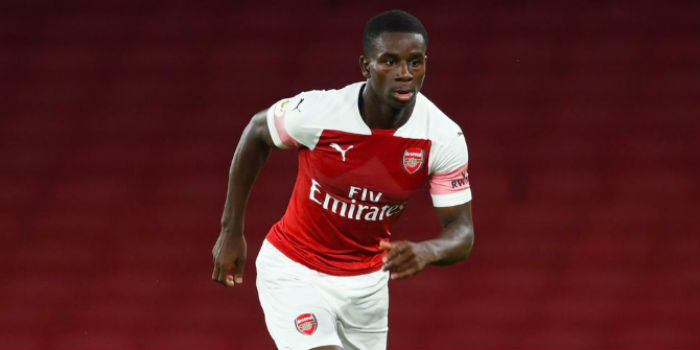 It has been a long time coming, but this season Jordi Osei-Tutu will finally get to experience competitive first-team football for the first time.

There were several occasions last season when Unai Emery could have thrown the right-back into action, but more experienced and not entirely convincing options such as Stephan Lichtsteiner and Carl Jenkinson were preferred instead.

Arsenal have elected to send Osei-Tutu on loan for the entirety of the new campaign, and, while that in itself doesn’t come as much of a surprise, perhaps his destination does.

The 20-year-old has linked up with VfL Bochum, who play in the second tier in Germany.

It was anticipated that Osei-Tutu could perhaps have been sent to a club in a higher division, but at least this way he has a very good chance of establishing himself as a regular in the starting lineup for his loan side.

One of Osei-Tutu’s team-mates will be Thomas Eisfeld, who will be able to tell him first hand just how difficult it is to make the breakthrough at Arsenal.

Although he joined at an older age than most academy players, Eisfeld still featured prominently for the Gunners at youth level and also played and scored for the first-team before eventually departing.

Osei-Tutu knows that, despite the quality that he possesses, he still has much work to do if he is to eventually break into the first-team at Arsenal.

His loan move leaves Arsenal short of back-up options at right-back, but from his perspective it was a necessary move.

After he featured for so long at youth level it will be intriguing to see how Osei-Tutu adapts to senior football and whether he can convince Arsenal to call upon him this time next year.

Good luck to him, the road is clear to the first team right now if he can impress. Thanks for your updates, Jeorge

Some good news!! I was able to sign Zana, and sell mustafi on PlayStation.

I hope we manage to sell Mhki to part fund this move. Mhki is a very good player but not able to shake off Mourinho’s impact and has become very inconsistent. I’m still amazed his agent managed to get a raise while joining The Arsenal!

Still has a couple of years left to develop before he really has to step up or move out. AMN though should really grab the opportunity and seal his poition at Rback as surrogate to Bellerin (who may be prey to market in a couple of seasons) Meanwhile Mavropanos and Willock (Nketiah maybe) will also benefit from strong loans. They need to be playing AS MUCH AS POSS. This is often the dilemma with bigger clubs like us whereby you want to keep them close to the first squad but they may not get as much opportunity as in a… Read more »

In a time where 1 breakout season for a 21 year old right back means he’s sold for £50M, we simply have to give youth a chance.

Because even if they don’t make it, they can bring in money.

I agree. Somewhere between Osei-Tutu, Willock, Nelson, AMN, Bielek is a player who is better than Wan-Bissaka, and therefore worth more than $50M to us!! But they need to play.

I wish him all the best and may he succeed wherever he maybe.
I seriously hope Abu is not sold to MU. If he were to be sold I rather he
goes abroad. Dnt forget RVP won the epl for rf. Thankfully lightning didn’t
stike twice when Sanchez went there.
Whatever it is, Arsenal can no longer be considered a top club .Compared to
Chelsea and MU who have invested massive amounts to get the best talent,
the US owner has been skint.

When did we get Aladdin’s monkey?? ?

Yes, would be sad to lose Diaby to ManU, so long after he left us…also after he retired. The agony!

Eis Eis baby…..was wondering the other…year, where he ended up

Who will be the back up for Bellerin in the upcoming season? AMN is a lil risky IMO in that position.

Chambers? Don’t tell me he’s not better than Lichtsteiner or Jenkinson. Also it wouldn’t be bad to have more defensive minded RB like we had in the past (Sagna, Lauren)