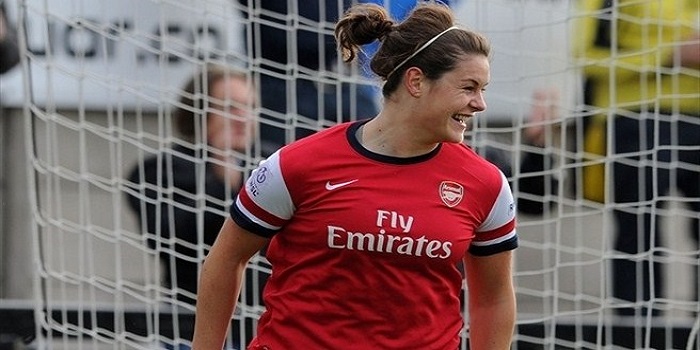 Arsenal have signed Scottish international centre-half Jen Beattie from Manchester City Women. Beattie played for the Gunners between 2009 and 2013, before leaving for Montpellier. She signed for Manchester City in 2015, where she has won a WSL title, two FA Cups and two Conti Cups.

Beattie played as a striker, a left-back and a centre-half for the Gunners, but has since firmly established herself as a central defender for club and country. Beattie won two WSL titles, two Conti Cups and three FA Cups with the club.

She has formed a formidable centre-half partnership with former Gunner Steph Houghton at City and her return to Arsenal does come as a bit of a surprise. Her contract with Manchester City expired and with Abbie McManus and Nikita Parris already having left and another first teamer rumoured to join them, it means City will experience a high turnover of players this summer.

Beattie will bolster Arsenal’s defence, with Leah Williamson, Louise Quinn, Janni Arnth and Beattie competing for a centre-half berth. Viki Schnaderbeck can also play in the centre of defence. Beattie adds experience and quality for the side in their upcoming Champions League campaign. Beattie is an international teammate of Kim Little, Lisa Evans and Emma Mitchell.

I’ll level with you, I drafted this story about a month ago and at that time I had some info that we were in for Meaghan which turned out, I think, to be bogus (or else the interest was at a very early stage and didn’t develop).

Ha, no worries Tim! Thanks for the explanation.

Serious question, does the women’s team have a director of football? They seem to get their business done so much more efficiently

Nah, transfers are just easier to do. Shorter contracts and almost never any fees. Arsenal pay better then why team in England which makes it quite easy.

Having a strong pedigree in the top level of the women’s game doesn’t hurt the ability of a side to sign players, either.

Fantastic signing! Welcome home, Jen Beattie. Delighted to have such a talented, versatile and experienced player.

I love how we are getting groups of friends and compatriots together, that can only help team spirit.

Question for Tim:
I thought Viki Schnaderbeck was leaving us this summer and Kemme was staying. Have I got that the wrong way around? Or are both staying for another season?

I’d heard that Viki might go but nothing official, but heard nothing after that (I think she’ll stay). Kemme is defo staying one more year then leaving. She’s on a leave of absence from the Potsdam police and had to return next summer.

Hope Kemme can stay fit next season. Where do you see her being played? Can she play on the left as well as the right?

She can do both, but I think Joe sees her mainly as a RB

With Maier joining as well do you think Lisa Evans will push further forward? Trying to see how everyone fits in. I know we need squad depth but there aren’t a huge amount of games.

Thanks. Good to hear.

I love the positivity that surrounds the Women’s team. I’m looking forward to their CL’s campaign and hope they can retain the WSL title next season too. Welcome back Jen!

Well at least the women’s team is fdoing well.

The men’s team’s lack of success for 3 seasons straight in CL will have a toll on who we can attract from market.

They need a right reality check.

We don’t have a Technical Director in place with the men’s first team.

Janni Arnth to Birmingham?
Good luck. You did us really well at the height of the injury crisis so your WSL winners medal well deserved?