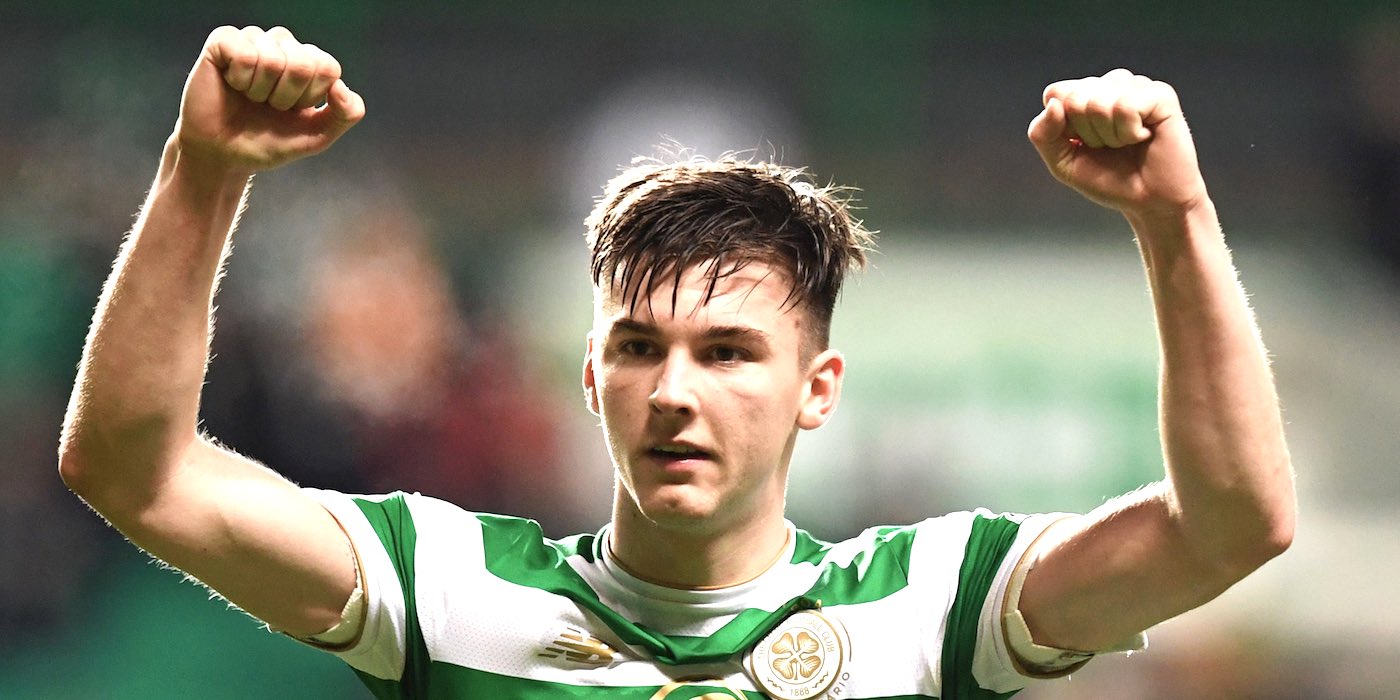 Celtic manager Neil Lennon has confirmed that an Arsenal offer for left-back Kieran Tierney has been rejected.

The Gunners are understood to have opened negotiations by tabling a £15 million bid, a long way short of the player’s £25 million valuation.

While the Hoops seem to have accepted that Tierney could move this summer (although they obviously aren’t saying that publicly), it doesn’t mean they are going to make it easy for suitors.

In response, we’ve gone quiet while we decide our next move. Perhaps we’re trying to find a pound coin.

“Arsenal are aware of what we value the player at,” Lennon told the Scottish version of a publication that rhymes with bun (alternative link).

“He’s on a long-term contract, he’s an asset and we don’t want to sell him.

“There have been no more bids that I’m aware of.

“It’s going to have to take a lot more than what they’ve offered the first time around to give us a decision to make.

“I’ve had a chat with Kieran as it can be a difficult decision and bit unsettling.

“I’ve been there myself so it’s important that we support him regardless of the outcome.

“His fitness progress is slow. It will be a couple of weeks yet.”

Unai Emery will be hoping we can get a deal done and dusted in the next couple of weeks so that Tierney gets a full pre-season under his belt. The first team are due back at London Colney in the second week of July.

He’ll be wearing a city shirt next week

Lennon’s got a mouth is wider than the Clyde.

And just as dirty.

I don’t think he would want to go to Sheffield

…that doesn’t work on any level

Player with an injury problem. Will fit in well. Let’s go for him.

He had a hernia op

Damn it Celtic, we gave half of our transfer budget. Have mercy on us

Low offer upsetting the selling club! player has previous on the injury front! Things beginning to drag on, well im glad to see we’ve learnt from our previous mistakes.?

It’s an ‘opening bid’ we’d be foolish to go in with the highest offer straight away.

Arsenal generates enough income to afford Tierney (who id love) Zaha (who id love) William Saliba (who i know nothing about) and a midfielder, stop crying peasant, stop pretending to be broke, and just sort this poxy mess out.

I don’t like Zaha, I get why people do it’s just an emotional thing, but he’s 100% going to score at least a couple against us next season after all this.

The sad reality is that Arsenal is now firmly in the second tier of EPL clubs.

We’ve been pretty firmly there for a while

Not very high up in the second tier either

Oh my God!
I thought I was the only Gooner in Drogheda.

How can a club, the size of Arsenal, be financially out competed by the likes of Bournemouth (outspent us in the last 3 windows), Brighton (this window) and Spurs (who have a billion dollar shiny piece of shit stadium to pay for)? I just don’t get it

I was wondering the same. We were told we have a stadium to pay for so we are tight.
Spuds should be facing a similar problem no???

They haven’t bought a player in 18 months?

It starts with “self” and ends with “model”, plus “sustaining” in the middle. Apparently.

And also we have wasted huge sums of money on rubbish buys and inflated wages under Wenger and gazidis.
The legacy is for all to see. Ozil and miki on crazy wages. Mustafi and a few others just not good enough. A owner that dont give a toss and people that run the club are just yes men.
I feel for the manager. Hes at a club that is treading water and is sinking slowly.

I do not feel sorry for Emery I am pretty sure he knew the brief about our spending policy before taking on the job.

This is a cop out. United have a long list of silly buys on even sillier wages. Has not stopped them from splashing the cash.

If Arsenal wanted to spend money, it would find a way. We don’t want to.

Which is fine, but this stupid haggling over relatively low cost talent is the stupidest, most infuriating thing I have ever had to deal with as an Arsenal fan in all my years of supporting Arsenal.

They do but they still easily outmuscle us in finance. And now here and there they seem as well to be (somewhat) curtailing free spending (relatively speaking) until they move dead weight. Which they do more readily and more easily than us for some reason. That’s our weakness, our dead weight is really dead weight that we take huge losses on frequently. Meanwhile we’ve had to sell some players that actually looked like they might be useful for us (Gnabry, Ox- if he ever got healthy). But the fact is we resisted the timely, frequent in-out transfer model recouping player… Read more »

i imagine our wage bill is much higher than the mid table clubs right now , that is whats killing us. as my dad used to say : ” its not buying the car that is so costly , its running it!

It is quite possible that these clubs can spend more because they dont have utter fuckwits doing the selling of the assets that they have so that they realise good values on assets rather than giving them away. Who knew that was a financially prudent way to operate? Certainly not Oxbridge educated Gazidis and “economics graduate” Wenger…..

They have owners that are willing to invest in their product and hope that it grows and is successful, rather than just looking to profit from it. Well, that and the gross negligence with contracts over the last 5 years or so.

By the numbers on Tierney? I believe we’ll get him.

I keep coming here for any hint of good news, and it almost never is, but I can’t stop.

Please – for this kind of clusterfuckery, just put the player’s name in the headline, nothing else, and your dogs on the cover picture. I will understand, and also be happier.

You could fill the article itself with details (please no), or just more pictures of dogs (please).

Signing a player who’s injured, and has missed 240+ days and counting over the last 3 seasons, is such an Arsenal thing to do.

Monreal +Koscielny are at one game a week stages of their careers, and our two best young defenders are also coming back off big injuries.

We need to find some stability at the heart of our team, and that means targeting players who can stay fit.

Strange. I thought dick law’s left? Why are we still dicking around on offers?

Say that 10 times fast.
Then cringe and hide the veg grater.

Because the problem was not him.

The problem was never him. It was one of those self perpetuated truths people prefer to believe in. Like Wenger Panic bought Ozil…what was this last January, Panic loan forget Panic buy. Or that Mustafi is the problem…what did we do Against Wolves with Koscielny and Sokratis? And how about the finals againts Chelsea? Or Granit is a poor player, what did Torreira do over Xmas costing us four goals with give aways or being fleeced off the ball in critical areas? again in finals against Chelsea. You can see these voices a dime and a dozen all over these… Read more »

Fine don’t get anyone in. At least fucking get rid of some of the players. We don’t need new kits to do that, do we?
Just don’t make me watch another season of the same shit, with the same players not giving a shit when shit hits the fan.
I’m going to vomit. There will be a lot of vomit.

Typical arsenal wishy washy, hesitant, irresolute, shilly shally and timid attitude. Nobody got the balls to declare this player fits the model, go out and get him. Arsenal’s aim for next season is to finish between 5th – 6th in the league and I doubt they can achieve it too. On a positive note, nobody’s got high hopes of the club anymore. So everybody can rest easy!

When I see what 12th place Palace want for their players it just highlights how shit Arsenal are at transfers.

Struggling to sign a player from Celtic?? What kind of club have we become.

Our budget is small because we didn’t get in the champions league So they tell us? But if they invested the budget last season better and got rid of the dead wood and gained some money in return we might of stood a chance of finishing in the top four,,,bang head against wall comes to mind

Getting rid of dead wood is not easy.

Elneny and Jenkinson still hovering around, you can barely sell them for free let alone drop them off in a suitcase.

Forget Mustafi or Ozil on Massive wages. At least these two we use through the season and contribute something (as I recall, Mustafi was preferred ahead of Jenkinson at Rback…not his natural position…and he did better than the Arsenal fan. You’d think it tells you EVERYTHIING you need to know about Jenkinson yets ome people prefer to have him in squad over Mustafi go figure)

Personally I think this one will be done in time for the kit launch.

Based on reports it would have been lovely to see that launch with Tierney and Zaha.

I reckon if we were odds on to win the league every year and these were the most talked about names in football, then yeah.

But we’re the Arsenal of the last 10 years and we’re courting a Celtic fullback and a Palace winger with a difficulty navigating gravity.

Great news. BC fullback is frankly a position we can afford to wait on. Monreal can cover for another season (he is in better wear than Koscielny at similar age) And Kolasinac many fail to remember was excellent first half of season providing plenty of assists and outlet with Iwobi out left. The problem was in the run in, Emery switched to a back 3 which led to 6 or 7 poor games and Kolasinac (better as a wingback) becoming Jenkinson (well almost) With the finite budget we have, it just makes NO SENSE to be wasting 20+m on a… Read more »

Helter skelter market approach…if ever there was panic buying. Transfer team seems to be just grasping at whatever straws appear in front of them. No apparent coherent strategy. With a limited budget, I would be making Cback most urgent priority. Plus there is incentive to get the Cback in early (unless we are waiting on Umtiti or a Kimpembe). We should be trying to bed in the new Cback as much as possible in pre-season. Then wide player there is more options and we can play off the potentials but we should be prepared to pay for the quality (rather… Read more »

If a tree falls in the woods and nobody was there to hear it, did it make a sound?

Let’s just push our youngsters through… forget about signing anyone maybe the young defender from France and see what happens… personally spending so much on Tierney would be a mistake, he is injury prone and not very good in the air, and has only played in a second rate league…so we will still get caught out with the long punt diagonal ball over the top….. to where our left and right back should be. So let’s take 5 players from the under 23 team and see what hapoens… we might finish only top 10 but at least watching arsenal will… Read more »

I dont want this kid. If arsenal ask u to play for them. U sign. Thats that. He can stay at shitty celtic. Scotts cant play football anyway