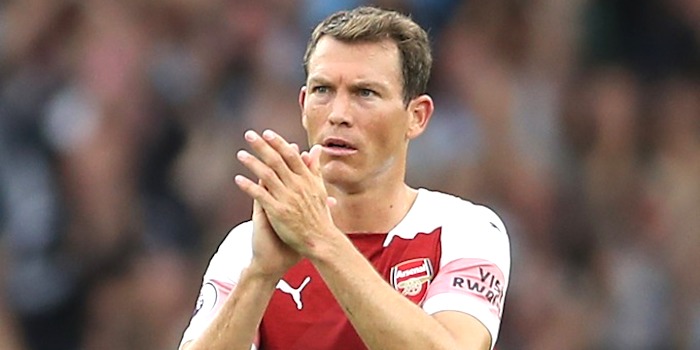 Stephan Lichtsteiner has confirmed that he’ll be leaving Arsenal in July when his one-year deal comes to an end.

After seven years at Juventus, the 35-year-old moved to the Emirates on a free in the summer as back-up to Hector Bellerin.

It’s probably fair to say that Stephan’s spell as a Gunner hasn’t gone as well as he might have hoped.

Even though Hector picked up a season-ending injury in January, the veteran Swiss defender found himself overlooked for key games with Unai Emery often preferring to play Ainsley Maitland-Niles at right-back.

Carl Jenkinson, who is also expected to leave the club in the coming weeks, also got the occasional nod ahead of the seven-time Scudetto winner.

In total, Stephan made 23 appearances for Arsenal, scoring one goal in the League Cup against Blackpool.

In a statement on social media, he wished the Gunners all the best.

Dear Gunners We were close to add an important chapter to this amazing club’s history. But to be close … is unfortunately not good enough. This is hard to accept. I’m very disappointed. It was our objective to bring Arsenal back on the highest international level and to win trophies. Both belong to this great club. I wish my teammates, my coach and his staff, all hard-working employees and all Gunner fans simply the best! I’m confident our team can complete our mission next season! I loved to be a part of this club. It was a great challenge and experience without a happy end, unfortunately. Thank you very much for your overwhelming support! It was much appreciated! See you Stephan #COYG #WeAreTheArsenal #YaGunnersYa #ThankYou

A post shared by Stephan Lichtsteiner (@stephanlichtsteiner) on Jun 3, 2019 at 5:29am PDT

We were close to add an important chapter to this amazing club’s history. But to be close … is unfortunately not good enough. This is hard to accept. I’m very disappointed.
It was our objective to bring Arsenal back on the highest international level and to win trophies. Both belong to this great club. I wish my teammates, my coach and his staff, all hard-working employees and all Gunner fans simply the best! I’m confident our team can complete our mission next season! I loved to be a part of this club. It was a great challenge and experience without a happy end, unfortunately. Thank you very much for your overwhelming support! It was much appreciated!

We wish Stephan all the best for the future. No doubt, he’ll find another club soon.

Juventus must be a tough crowd.

Positive vibes only from Lich ✊? #biglich

Sadly I think he has to join a different sort of club to receive a happy ending.

Thanks for your time…. I think that’s as polite I can be….. Off to Everton or West Ham now?

More likely back to Grasshoppers or another Swiss club so he feels he can still play football.

Unless he is a catholic.

Or his names Mohammad?

No need to be horrible. He was past his peak when he came to us. I don’t think it was for want of trying but the pace of the PL certainly made him look his age. Shame we didn’t get him 7-8 years ago.

Whatever is next for him I wish him the best.

Well said! Some of our fans really are the pits! I think his statement shows a lot of class. Arsenal let him down for the most post. Both Stephan and Petr were serial winners and it’s sad that their influence couldn’t filter through to the rest of the team. I wish him the best for the future.

I think this singing falls upon Sven or Emery. The Suarez fiasco must be on Emery & Raul.

Good on him and the club for not renewing (or cutting short) his contract. In best interests of everyone. An experienced player in the dressing room was a good move, in theory, but he was clearly off the pace for PL football from day one. A hefty wage off the weekly payroll though so makes room for a better solution.

For all his faults, I quite enjoyed the level of c**tishness he brought to the side. Not quite Lehmann mental, but the closest we’ve had to big Jens’ bat-shit crazy / wouldn’t want to meet in a dark alley personality in a long time. Thanks Stephan (for ensuring AMN got a good run in the side, if nothing else!)

Waste of time signing by Mslintat. Together with Raul, they saddled an extra 90K a week in salary for this bloke who barely featured. You add Mhkitaryan and you better understand how we have been buying at convenience to someone’s close circle instead of buying for the better need of the club. I’m not sure what the thinking was with Lichsteiner. We had AMN who already performed well at Lback the season before. Right side is his Natural side so fullback IS his natural position. We had Chambers who could have been better convinced to stay for season, cover Rback.… Read more »

Edu had been director of football of Corinthians and was appointed in 2011 already.

So in essence we paid £4.5 million in salary to a backup right back who had a winning mentality and pedigree with no transfer fee and provided much needed guidance to a player that was screaming our for it and a model shithousery the rest of our players badly needed? Personally, I think we got a bargain. He was never signed to play as much as he did but needs must.

One bad signing by Sven and you totally condemn him. What about Leno, Torreira, Sokratis, Guendouzi and Aubameyang.

Ah, what wonderful foresight… no wait the other thing… Hindsight. I was pretty chuffed when we signed Lichsteiner. A full international, with loads of titles under his belt and on a free as a back-up right back was pretty impressive business. Yes it didn’t work out but we did see a marked improvement in Hector’s defensive work and Stephen said when he arrived he wanted to help Hector become a better player. If he did that then how can it have been a waste of a signing?

To be fair, even if his constant parroting of the same statements is pretty annoying, he has been consistent in his criticism of the signing since it happened. It’s not hindsight on his part (he is right at times; it just his pompous treatment of anyone that disagrees with him that I find annoying, rather than his actual opinions).

Well it was worth a punt in as much as he didn’t cost a fee. Good luck to him ; but we clearly need someone who can handle the pace and power of the Prem’ from the off.

Remember we have a limited transfer budget. Leaving for free – Cech, Ramsey, Welbeck, Lichsteiner. Likely bc of age – Koscielny. Peripheral characters – Ospina, Elneny, Jenkinson end of contract but should keep for one more season bc of priorities elsewhere – Monreal Potential on the market – Mustafi or Chambers (depending on offers) and Ozil or Mhkitaryan (Depending on who wants to pay their wages) So UNLIKELY we will be doing too much in other areas. If we can get in a Cback, a midfielder and a winger, we would be lucky. Question is how much are we willing… Read more »

Ya gooner
Reply to  Santori

Exactly this we’re a huge mess at the momebt and it’s rwasonable to expect this to affect us for at least abother 5 years, if we make smart signings we may hover around the same spots but if we mess up in the next few years we’ll have to get used to the possibility if finishing around 8th.

Definetly helped improv Bellerin and Niles.
Was new to the club yet started the fight with the Spuds that led to our comeback.
Goodbye and good luck Stephen.

Wish him all the very best in his future endeavours. His message clearly shows his maturity, honesty and passion which I’m sure helped the team through the season both on and off the pitch.

Brought some well needed fcuk you attitude to the squad. Bellerin improved significantly & so did AMN when moved to RB after Bellerin’s injury. Nothing to do with Lich being there ? Of course not. Only a one year contract so not stuck with him on the wage bill for years with no-one willing to take him off our hands. (like so many others)
No idea why people are banging on about what a terrible signing he was. Not spectacular but far, far from terrible.
Good luck Stephan.

If he helped AMN and Bellerin become better players, he’s served his purpose. Enjoy the rest of your career, Stephan, unless you end up at someone we play in the future.

Where in his post does he actually say he’s leaving? In fact he actually says “I’m confident our team can complete our mission next season!”. On a side note, when is Hector back?

Well London fashion week starts on sep 13th so should be around for that.

It’s been officially announced that he is leaving

Well he is talking about the club in past tense.. But I get what you mean. There’ll propably be a more official announcement as we near July 1st, so I really don’t think we should expect him to be around next season.

Yes probably. I thought maybe it was a lost in translation thing; mixing up past tense and present tense, as there’s no official confirmation on arsenal.com or Arsenal twitter yet.

Congratulations on a great career. Should have come to the Prem a good few years ago!