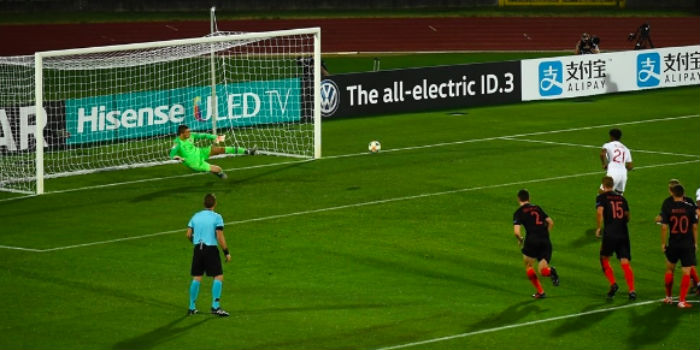 Reiss Nelson won and converted a penalty as England under-21s ended a deeply disappointing European Championships with a 3-3 draw against Croatia.

The 19-year-old was on the bench for the first two games of the competition – defeats to France and Romania – but was finally given a start for tonight’s dead rubber in San Marino.

It didn’t take long for our man to make an impact, as his quick feet drew a foul from Branimir Kalaica. Reiss dusted himself down and calmly slotted home.

Can’t believe Sessegnon was starting ahead of Nelson. Lose first two games with Reiss playing no part. Starts the third game and took him only 11 minutes to win and score a penalty. Boothroyd got it completely wrong with team selections.

Despite a positive start the Young Lions’ fallibilities at the back once again came back to haunt them.

Josip Brekalo cancelled out Nelson’s strike before the break and even though James Maddison and Jonjoe Kenny put England ahead twice more, Brekalo’s equaliser eight minutes from time was enough to secure a 3-3 draw.

In the other game in Group C, Matteo Guendouzi played 90 minutes as France and Romania drew 0-0. Both teams progress to the semi-finals.

Despite winning their first two games, Krystian Bielik’s Poland were knocked out last night after a 5-0 defeat to Spain in their final group game. La Roja’s win sets up a showdown with Les Esports. Germany will play Romania on the other side of the draw.

Sucks for him and Beilik in particular (very odd to win 2 of your 3 games and still exit) but selfishly I’m kinda happy, as they can now get their summer break and report back for preseason relatively early and be involved.

England coach should’ve played him in the first 2 games!

Bielik and Nelson are in serious LANS territory that’s for sure!

I agree. Truly amazing how far our stock has fallen that we are praying two completely unproven youngsters can hit the ground running.

Best of luck to them both but it’s all a bit pathetic if they are genuinely expected to have an immediate impact.

I don’t think anyone expects them to “hit the ground running” or “have an immediate impact”, I think what a lot of fans want is for them to be given a real chance to prove themselves and grow into a first team role rather than simply be shipped off on loan again. This is especially the case for Bielik who has a year left on his contract.

Part of the problem with the current Arsenal team is it’s hard to form any kind of connection with a group of players when most of them are “mercenaries for hire”.

There’s no better antidote to the soulless state of modern football than young players coming all the way through the club, or developed by our academy, like Bielik and Nelson.

How far our stock has fallen that we want our club to produce the next generation of world-class players ?

Being excited for youth has never ever implies we expect them to hit the ground running. I suggest you get that out of your mind because it sounds like you’ve already built a narrative in your head whereby if they don’t perform as expected every game, you’ll be the first to go rabid, scream “I told you so” when no one ever said such thing, and start demanding we buy ready-made players and eschew giving youth a chance (or worse yet, boo them like some did with Iwobi and Bellerin). Many of us excited for youth have come to terms… Read more »

Yes. Some people desperate for anything prefer to imagine anyone is better than players we have (under performing). May not be the case. Remember Kolasinac now so despised bc of his Jenkinson impression last 7 matches was solid first half of season and contributed plenty of assist and endeavor on our left with Iwobi. Anyone they said better than Granit but Torreira hardly held the squad together in his absence and Elneny added nothing was (rightly) minimally used. Anyone better than Mustafi but our defense slipped 3 goals when we brought in a back 4 with Koscielny and Sokratis. Holding… Read more »

If we say uncle will the “first” comments cease?

So for everyone saying hOw fAr wE hAvE fAllEn If we are desperate as fans for these young players to hit the ground running, shouldn’t they be 100x more ? If we can motivate this squad of players, we can achieve a lot next season. We already improved a lot against the top 4. Sokratis with Holding and Hector as the mainstays in defence will be a much better compared to this season. By a lot i mean Finishing in Top 4 and any 2 of the three cup comps we’ll be playing in. Yes, let’s be realistic here- we’re… Read more »

Perhaps, Winning the two out of three cups.

Sokratis-Holding not a given recipe.

Holding excelled in a back 3. We have yet to see him function back 4.

Same people said Koscielny and Sokratis was it in a back 4. Without Mustafi, we slumped and leaked 3 goals against Wolves with that pair.

Not watched any of this tournament, but has the refereeing and VAR use been as awful as the Women’s world cup?

I take it you haven’t watched the women’s world cup then. Absolute farcical refereeing.

Moley mole the mole who lives in a hole

pretty sure that should read ‘espoirs’, not ‘esports’

Defintely need to lock him down and bring him in next season. Not sure why we have to wait till end of U21 unless we are using it as a shop window to be rid of him. Even if we bring in Nelson we need one more creative winger at very least. I’d add Ziyech personally and maybe throw say Nketiah on loan to them for a discount on the 31.2m Also like the look of Florinel COman the Romanian U21. He plays left wing but can also function as a striker, something we should think of developing (other than… Read more »

England managers have inherent bias against Arsenal talent. If we don’t use Nketiah this season I hope we put him out on a VERY strong loan. but Nelson we should cycle in AND use. We lack these sort of creative wide players to pull apart defences that sit deep. Most of the work falls on the should er of Iwobi and its predictably from the left (with Kolasinac) most season that our best threat has come from. Laca impressed me this season as the only other player with enough guile and footwork to create space. BUT we need at least… Read more »