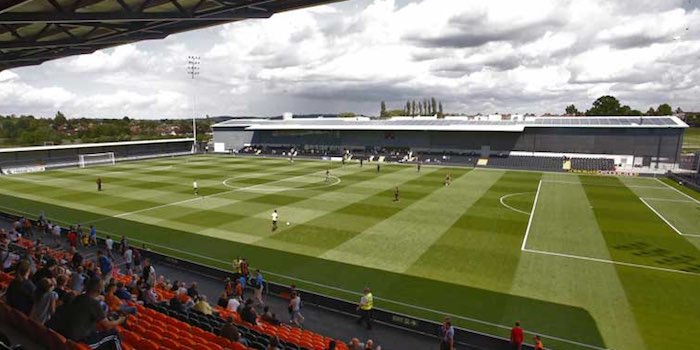 Arsenal have announced a pre-season fixture against Barnet, which will take place on July 24th at The Hive Stadium.

It’s billed as an ‘Arsenal XI’, because at that point we’ll be just finished the pre-season tour of America.

The Gunners take on Real Madrid in Washington DC on July 23rd, so this will be a game in which U23 and U18 players will take part.

When you consider that quite a number of them are going to be on the tour, it might be a line-up containing some new names for people who don’t religiously follow our coverage of the reserves and youth teams.

With the likes of Lucas Torreira, Mohamed Elneny, Reiss Nelson, Alex Iwobi, Matteo Guendouzi and Krystian Bielik all involved in summer tournaments, there will be plenty of youthful representation with the senior squad in the states.

That could mean we see some of the lesser known young players, with the likes of Sebastian Guilfoyle-Smithers, Mandrake Magee-Pewter, Steve Sticker, Kris Flannel, Boltlock Diamond-Cork, Ace Transmit, Denver Canon-Fyre, Nick Camden, Roberto Fur, Stanfold Archimedes and Sebastian Tray all hoping to get their chance to shine.

Hope Drew Driver-Makita gets a chance

Me hope, Dick Arseman finally gets his chance.

Can we afford to have some of those names printed on the shirts?

We should start a pre season game with Spurs every year. Nice way to spice things up and get players motivated.

I very much like the idea. We just have to call it unfriendly game.

No much better to play a superior team like Barnet

I’ve heard Roberto Fur has the softest touch out of all of our youth players.

And with Flannel cleaning everything up at the back, we could be onto a winner

If only Mustaffi was fictional too.

I’ve heard Canon-Fyre has one hell of a shot and has been recently brought in from the Shaolin Soccer league.

Aren’t those the guys in the Tory leadership race?

Pretty fitting since our squad is still an all time Barnet XI. Not as much without Arteta, but still

Interesting bit of trivia; Stanfold Archimedes used to be called Clipston Stuart. However, being somewhat gifted cerebrally while playing as a schoolboy, the local press gave him the nickname “The Stanfold Archimedes”. He liked the name so much that he changed his name by deed poll.

Actually, last time I put a hat on I struggled to take it off…
#CAPSLOCK

Dunno what england are doing not playing Reiss in U21. Knocked out by Romania.

That kid Florinal Coman worth a look at. 6 foot, 21yrs technically gifted. Great for the near future up top.

Totally agree on both accounts, was Nelson’s omission some kind of statement? Feel AFC youth is so needlessly and repeatedly overlooked by England coaches.
And Coman really did, knew nearly nothing about him before today. He’ll have caught a few eyes out there!

Aussie Ginnef
Reply to  Leno me, I’ll be your friend

There are some articles regarding the considerable release clause in Coman’s contract.
It’s a significant amount around £88m.

Is Inanimate Carbon-Rod injured or is he likely to get a run out?