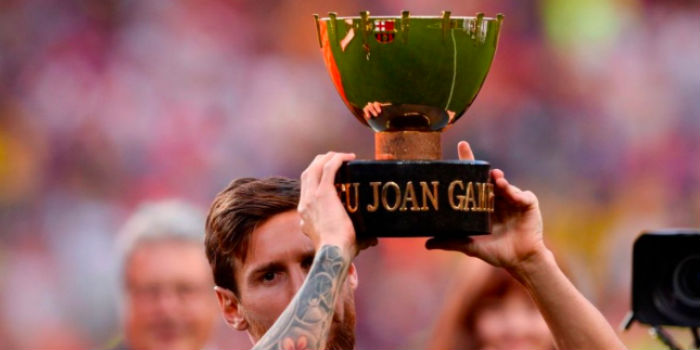 As expected, Arsenal will travel to Camp Nou to challenge Barcelona for the Joan Gamper trophy on 4 August.

The match will conclude Unai Emery’s pre-season preparations ahead of our opening game of the Premier League season away at Newcastle United on 11 August.

The Gamper Trophy has been contested annually since 1966 with Barcelona winning 41 of the 53 matches.

Manchester City (twice), Aston Villa, Ipswich Town, Nottingham Forest and Sp*rs are the only other English sides to have taken part.

Tickets can be bought here.

International Champions Cup? WTF is that? Arsenal are champions? Why did no one tell me? And there I was depressing like Depressey McDepressed at the thought of us winning the square root of FA…suddenly the depression is lifting…more of this sort of thing please…

Actually despite being exhibition matches, it is great exposure. Our names are being associated with Bayern, Real and Barcelona, let’s hope the filling of our trophy cabinets follows the example of those peers.

That’s a lot of football against a lot of decent teams! I miss the days when we’d just play a couple of Austrian part-timers

The last time we did a preseason in Austria was 2009, which was basically the last time we had a decent start to the season. Didn’t we beat Everton 6-1 away from home on the opening day? Denilson eased one in the stanchion from 20 yards to kick off proceedings.

8 games in 30 days is quite the challenge but we’ll be up for it im sure. For all the faults of our club, we do seem to have decent pre-seasons. I guess we don’t feel the pressure as much huh? Ok, now that thought got me vexed! Bye bye now!

I know we’ll use squad rotation, but to have that many games and that much travel in such a short period of time is surely counter productive in terms of building fitness for the first team players.

8 games in 29 days, seems to have more to do with the bottom line than fitness?

Great bring it on, let’s see what our youngsters can do.time to shine and hopefully get themselves into the first team.

Anyone else putting money on a Denis Suarez hat-trick?

I thought he is no longer In Arsenal

These pre-season matches lack any lustre on our part. We are no longer a team to watch at very least as exciting upstarts when we were back in the day. We no longer carry enough technically gifted players. Some complain we lack bottle but I feel it is the other way round. We have fight in this team but they get lost because we don’t have enough technical wizards particularly to pull teams sitting deep apart in away games Add to that the league itself has become far more competitive in this respect. The likes of Everton, West Ham, Leicester,… Read more »

Just saying there is rumour that Spurs are looking at Bruno Fernandes. And our rumour is on someone from ligue 2. Also worth bearing in mind with Juve, Madrid, Barca likely Bayern all adding, there may be opportunity for some players they no longer need. Most will of course likely be older ones but the likes of Umtiti possibly surplus as well. If higher apex predators above us are satiated by other options and Umtiti remains available, price ‘may’ fall. N0t saying he is the solution but that is the other permutation we have to weigh on in not jumping… Read more »

Will they sell tickets for other areas or are they going to offer them all to the home fans?

Although this maybe a friendly,Arsenal have fallen behind the big epl and Euro teams.I don’t know but news linking Abu with Pool and MU show how far have Arsenal deteriorated If it were to go thru it shows the board lack ambition and want to win trophies on the cheap. That is anon starter. Could Chelsea and MC as well as Pool been so successful with out the top players and the millions of pounds spent. probably not. I am waiting for the Emery miracle to take place next season. If not Arsenal will be like Everton /Whu /NU 2nd… Read more »