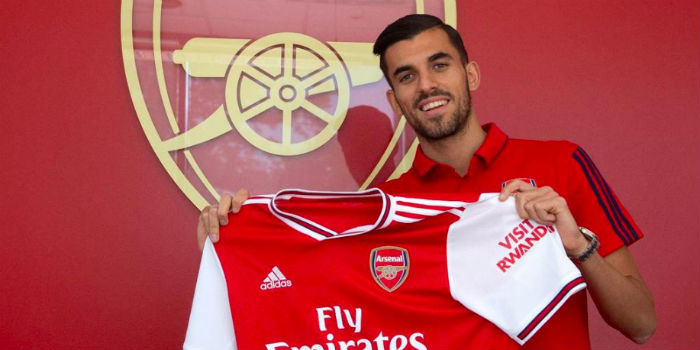 Earmarked as a replacement for Aaron Ramsey, the 22-year-old will spend the year at the Emirates.

He remains under contract at the Bernabeu until 2023 and the Gunners, who are paying €4 million for the loan, do not have an option to buy him next summer.

Ceballos joined the Spanish giants two years ago from Real Betis in a deal worth £15 million and he’s since made 56 appearances scoring five goals.

?⚽️The decision has been made. This season I will be a gunner! ???????I am anxious to start. Hello Arsenal. Here I am.??#arsenal #ceballos #newteam pic.twitter.com/I1VoD2Q7Zu

He was one of the stars of the recent Under-21 European Championships in Italy and San Marino where he helped Spain to victory.

Speaking about the deal Unai Emery said: “We’re excited to see Dani join us. He is a talented player with big technical ability, creativity and precision.”

bolt from the blue…
Welcome to the Arsenal Dani – Win things 🙂

Is a trophy realistic next year?

Your point being what exactly? Dont try to win things?

Dont be negative with my negativity because optimism hurts. True story.

Yes – We are the Arsenal and there are 3 cup competitions which we can realistically compete for.

If only saying it would make it so. Shame it doesn’t.

3 of the last 6 FA cups. Were in the Europa final last season, which we could certainly have won had we not shit the bed the last few weeks. We have been competing for them. No reason that should change now.

Competing for them with a good chance is an expectation we should always have here at the Arsenal.

Doubt it. It would probably be a domestic cup if it was, but we’d need to be very lucky, and often, in the draw. The main problem is/remains the defence – particularly the central defenders which are, with the exception of the injured Holding, pretty awful most of the time.

Hooray!! Now get Zaha over the line

I’d still be nervous with Mustafi in front of a brick wall.

A Different George
Reply to  Giovani

I think his father is still alive. And still probably pretty good.

Maldini’s son just made his debut for Milan… Just saying?

Rob Holding is better than Cannavaro…

Hahaha, is that you who said he was better than Van Dyjk?

A Different George
Reply to  Pete

Whenever I hear Cannavaro’s name mentioned, I picture Holding singing that himself after the FA Cup final.

No thank you. We don’t need the overrated and overpriced diving cheat. Everton Soares would be a far better and far cheaper option

In all seriousness, I’d much rather get Everton for 30m and, say, a 40m rated CB then just Zaha. It makes more sense with our financial restrictions this summer.

Well, if you’ve got the extra millions that we’ll need to buy him, from Palace, now is the time to let the club know!

Quick – lets’s piss on our chips

Anybody want to chip in with their piss??

No there wasn’t. There was much uncertainty about Suarez which proved to be correct. This is not the case with Ceballos who has been praised in all quarters

Which quarter? Real’s quarter where he was at best mediocre?

Voted player of the tournament at the Under 21s

When did showing real promise at U-21 level become a bad thing? Bizarre logic.

Not a bad thing but not a proof of excellence either. Within your logic , we won the youth league last year so all our young players are first team material ?

Believe me, we’ll love him

He’s played for Spain’s senior team as many times as Ndombele has played for the French senior team. Fair to say competition in midfield for Spain is high, they certainly wouldn’t play Eric Dier.

His name isn’t Mesut Ozil so he can’t be any good eh Alex ?

It Is What It Is
Reply to  Alex

You’re already attacking him becsuse he may prevent Mesut from playing.

We hope Mesut won’t play or even better be sold!

A welcome signing but seems like a lot of money to pay for a season’s loan with no option to buy. I thought we were supposed to be on a tight budget? This seems a very short-termist use of that money.

But, I wish him well and hopefully a good deal for all concerned!

Exactly what I thought. That’s a ‘high’ loan fee would make more sense if Arsenal had an option to buy. Anyway, it’s a signing and I hope he hits the ground running!

If you imagine signing him for 4 years, that would be 4×4 = 16 million euros. Seems cheap for a top young Spanish midfielder. Even if you had him for 8 stellar years, that’s 32 million euros, which is still great in the current market.

Definitely that’s not how it works.

It kind of is though isn’t it, the cost of a player would be spread over the length of a contract. €4m seems cheap to me all things considered.

Just splashing the free cash we got from the sale of Bennacer.

we paid somewhere in the region of 2.5m for Denis Suarez, on a winter loan with no preseason to get him up to speed with the club.

4m seems like a square deal in this market.

*chants* oh dani ceballos we want you to stay

Wait until he plays, no?

My man better be given a 15 min cameo at the Emirates Cup on Sunday please ?

Can’t get the video interview on arsenal.com to play. Anyone else finding same problem?

You could have just said “No” rather than down-voting me! Anyway, I have now confirmed problem is with the aresenal.com site when viewing with Firefox. When you click on a video it should pop up login window but that is no longer happening in Firefox. As Firefox still has a huge customer base I hope they will become aware of this issue and fix it soon.

Hmm even with Chrome I still cant get teh videos to play. It popped up teh login, I successfully logged in with my digital embership ID, but when I click the play icon on teh videos nothing happens. Frustrating! Anyway, while this signing is great can we PLEASE sign a defender who will be available for this season!

The videos are always up on the club’s YouTube channel as well if you don’t want to deal with the official site.

Is it necessary to have all this PR videos since it’s only a loan with no extension option?

Give the people something to conplain about, thats what i say

We shouldn’t complain generally. We should buy the Arsenal staff and shut up.

And of course you are absolutely entitled to defent the PR strategy, which is actually just a decoy that we have a strategy.

Really couldnt give two shits about the pr strategy, looking forward to seeing this lad play though. Guess im old fashioned that way

To come into a team with world class strikers and a ball carrying midfield position to be filled – what a perfect opportunity for him as a player?

So, two signings done. Could we get some defenders done now? Who’ll play for us this season?

(I DO think that the Saliba deal seems like a good idea. I just want a left-back that can defend once in a while.)

Well done negotiators! And you still have 41m please Ceballos someone else!

+ fees from ospina deal and potentially beilik and Kos sale

How much was Bennacer again? And don’t forget 2.5m for Amaechi sale! I’m suddenly excited by all the money coming in from nowhere. :\

Its like paying the Pizza Guy with loose change, and you start finding coins in odd places like under the jar of biscuits that have gone stale coz you left it open for days.

So Unai and Raul save their second Spanish damsel in distress in 6 months. Let’s hope they won’t play him out of favoritism. We’re not the training ground of non desired Real (or Barca) players.

You do realise your beloved Mesut is a ‘non desired’ Real player ? Even by your standards that is hilarious!!

Do you live under a rock?

I think he joins us because he doesn’t really rate his chances under Zidane. With a full season in a top league he might have a better case for his place in the Real Madrid team upon his return.

Unless he really likes it here and becomes a favourite. Then maybe we could sign him anyway..?

Great signing. Glad it’s done. Shame we don’t have the option to buy

Not to fussed this isn’t a permanent transfer. Gives the young boys in the mid field to mature, extra bit of quality to (perhaps) get us back into the champions league and then we will hopefully have enough budget to go for other targets if necessary, he is also not expensive…I like this deal.

I would feel the same if we got Malcolm in from Barca(won’t happen, wishful thinking). Then we can spend our money on defence because God knows we need it.

He only came because he wanted that sexy kit. He’ll be back next year if the next one is as good.

You guys wanna know something better?

According to AS, Spuds have contacted Ceballos first, Pochettino rates him very high, which means we have beaten them for the second time.

Would be nice for the Kroenke Empire to put their money where their mouth is and back up their platitudes with some serious investment to make us competitive. We need more defenders!

But lets not tarnish the fact that we’ve got a talented young midfielder to add some depth and quality this season. Lets hope he adapts quickly and makes an impact!

Welcome to The Arsenal, Dani.

Hopefully if he does well we can re-negotiate that “no option to buy”. Looks a good player.

I HAVE to know….what number will he wear??

The total Ramsey replacement! Without the hamstring issues, we hope.

This feels like the kind of signing done through Raul’s contacts rather than through data processing. I’m all for it, simply because we’ve seen in two decades how many top players we couldn’t get signed because we didn’t have the tools to play the market the way other clubs do.

Not having an option to buy the player after we spend a year developing and integrating him into our side seems like a real mistake. Perhaps having the same need for a box to box midfielder next season is what Raul meant when he said we have to “outsmart the market.”

Hopefully he can hit the ground running. He’s a very good player. If he enjoys his time with us perhaps he won’t want to go back to Madrid. He’s quite slight, which is a concern, but then so was Yossi Benayoun and he was decent. This season might be interesting now at least.