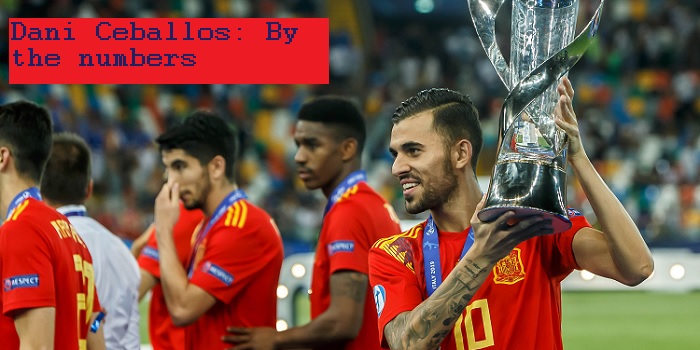 Arsenal have confirmed the loan signing of Dani Ceballos from Real Madrid. 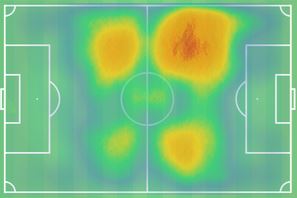 Ceballos for his career has started primarily from the left hand side of the field, allowing him to cut inside on to his dominate right foot. The majority of his time at Real Madrid has played as a left sided midfielder but in the past has been able to play further up the pitch.

Most recently he has done this more attacking role for the Spain U21 team, where he played half of his minutes from the attacking midfield position.

He will give Emery options for rotation among the midfielders and attackers and while not a like for like Aaron Ramsey replacement (there really isn’t one) he should be more than capable to filling the minutes that Ramsey gave Arsenal in midfield and attack while also allowing Emery flexibility to vary his tactics depending on the opposition.

0.10 – Open play xG per for his career. 44th percentile among midfielders.

Ceballos doesn’t shoot a ton and I wouldn’t expect that would change in the Emery system that doesn’t produce a high volume of shots overall. When he does shoot his shots are pretty good (0.08 xG per shot), especially for a midfielder who doesn’t get many touches in the box. He has also produced more goals than expected suggesting that perhaps that he has good ball striking ability but with just over 100 shots in his sample size it is too small to draw large conclusions.

87.7% – Pass Completion percentage for his career. 96th percentile among midfielders.

7.7 – Final third entries per 90 for his career. 96th percentile among midfielders.

1.3 – Successful passes into the box in 2018/19 with Real Madrid. (I don’t have the percentile information for this right now, I’ll have to get to that eventually)

1.6 – Successful passes into the box for his career.

1.4 – Key Passes for his career. 71st percentile among midfielders.

0.14 – xG assisted for his career. 70th percentile among midfielders.

2.4 – Dribbles per 90 for his career. 97th percentile among midfielders.

As a creative and technical player Ceballos really shines. His passing is among the best in the world. He completes passes at a rate much higher than expected, given where he was passing from and too, my expected passing model shows an average player would have completed around 84% of his passes while Ceballos completed over 93%.

His ability to progress the ball is also very good, both last season for Real Madrid and for his career. This is something that can really help Arsenal as they have become very dependent on Granit Xhaka to be able to connect the midfield and attack. He also does well creating for team mates and advancing the ball into the box.

2.83 – Tackles per 90 minutes for his career. 73rd percentile among midfielders.

1.61 – Interceptions per 90 minutes for his career. 47th percentile among midfielders.

1.57 – Fouls committed per 90 minutes for his career. 43rd percentile among midfielders.

Ceballos’ defensive stats suggest a player that puts in work on the defensive side of the ball and that should endear him to the Arsenal fans. These statistics are not adjusted in anyway for possession, which might under count his abilities some as the Real Madrid and Spanish national teams have a lot more of the ball.

After looking at his stats and watching some video, I think that this shows that Ceballos can play in a midfield two and not be a defensive liability while also perhaps fill the “pressing 10” role that Emery has shown that he would prefer.

Overall I am excited for this move, I wish there was an option to buy because I think that he has enormous potential. His numbers for Real Madrid last season came against a lot more of the weaker teams in the league, with only a match against Valencia

As a short term option to strengthen the Arsenal midfield and provide depth at a number of positions it makes a lot of sense.

Sources: Opta via Whoscored, my own database and wyscout.

Have a doubt. What is xG?

Seems to tick the boxes…leaves me very optimistic bout his work for the Arsenal this season!

Really excited to see him play. One of the best players in the Euro U-21 championship. We seem to be going all in for project youth with players like Saliba and Martinelli signing, Ljungberg becoming first team coach, and big prospects waiting in the wings like Saka, Smith Rowe, Willock, Nketiah and Nelson. Not to mention that both Guendouzi and Torreira are still very young. If we can nab Everton and Tierney too things would be looking very bright for the future. It’s just a shame that Saliba can’t step into that CB position right away.

Martinelli is an OK decision although not one to get me excited about the usefulness of Edu just yet.

Saliba is a stupid decision.

I know Kroenke is not popular (and for good reasons) but this is becoming something of a feature with all of his clubs in the US. The Nuggets (b’ball), Rams (football) and even the Avalanche (hockey) are all now packed with excellent young players and many here are expecting these teams to be very competitive for some time.

American sports leagues are built for cycles. As long as you don’t do anything stupid and young talent that are good don’t get hurt you are inevitable going to dumb your way into a good cycle. Now how long that cycle last? You can be the patriots(nfl) or spurs(nba) but I’ll doubt that long because his teams have a history of being mediocre or bad from a team operations standpoint. I hope I’m dead wrong for arsenal but I have no confidence his American teams can sustain success.

A Different George
Reply to  Caligunner

This is exactly right–but American sports teams aren’t just built for cycles. The structure of the leagues themselves creates those cycles. A crap club is rewarded with exclusive rights in the best young players (through an inverse-order draft) rather than relegation, which does not exist. The salary cap means that as young players develop into stars, some of them must be sold to rivals (not overseas). It is not unusual in the NFL, for example, for teams that finish last in their division to finish first in the very next season–and vice versa. There is just no meaningful comparison between… Read more »

One small thing, do you have something like a defensive actions/90 min stat (tackles + intercept. + aerials won + whatever else, like fouls won (also a skill)), or just a percentile for tackles+interceptions, because a high-tackling player might be low-interceptions as well, for example.

Its the dribbling stats that interest me. Contrary to what the media and certain quarters like to portray us, we don’t lack cojones. We lack technical abilities. We ONLY have 2 players who can take opponents on one on one. Iwobi and Lacazette. Nelson can add a third (if we don’t do the stupid thing and loan him out) BUT we need at least 2 more. Another wide player to balance out Iwobi on the other flank and not risk too much on a younger player like Nelson. Plus we need to assert more authority in deep midfield. That means… Read more »

Don’t understand the thumbs down. Forget who he is replacing and focus on who he can compete against — almost anyone in midfield. The competition for an immobile, defensive liability’s spot could be immense. (Although his suck up to Emery suggests he’s going for Ozil’s spot. So be it.)

I think a Fabregras would be a better fit in this team than another Ramsey type. That being said I would still welcome either

Even if he turns out to be Cazorla type, he will still fit in.

Hm, Cazorla type. Not many of those kind in the world. Bergkamp, I miss Santi. By the way, get in Dani boy.

If anyone doesn’t miss Santi, they really need locking up.

I heard from other reviews he’s been used deeper and has played and performed well from there.

If so, would like to see him deeper alongside Torreira, and possibly phase out Xhaka.

I absolutely love Kolasinac after defending himself and Ozil against those scumbags, even if it wasn’t the smartest thing to do. Gotta say I’m disappointed that Mesut drove off and left him though. Thank fuck they’re both unharmed.

Heard their wives were in the car too, so not entirely irresponsible to drive off.
Besides, knives against a tank?

Very disappointed in people passing judgement of a 10-sec clip. There were wives in the car, and we don’t see what was happening on the other side of it.

Wives or not, you fight or run together. What you don’t do is leave your buddy. You tell him to get in the fucking car.

Kola clearly tells him to drive off just before going after them at the start of the clip. You guys are tools.

It’s a Geländewagen. I doubt they could even puncture the tires on that thing!? Get in, lock the doors, one calls the police, another starts filming. What would they do? Key the car?
Apparently they were followed for some time. In a G-Wagen. By two twats on a bike? Slam on the brakes. Back up. Done.
I do love Kola just going “I’ll have none of this shit” and just gets at them. Stupid, but infinitely loveable. Statue, now!

Can someone explain how providing precious game time to a 21 old would benefit in the long term instead of using someone from our talented young wingers or midfielders? Are they aiming for top 4?

I see it as a bridge. So much of our talent is still mostly under 20 and that is a big jump from playing against kids your own age to full grown men. I want them to get minutes but you can’t realistically plan for one or more to make a huge jump this year. We got it last year with Guendouzi but that is much more the exception than the rule. The thinking that I would use for this is that Ceballos won’t block a player we have if they show they are ready. But he also gives needed… Read more »

I’m just gonna indulge my fantasies a bit and hope he brings a little Santi-type magic back to our midfield. Good passing, good control, good shooting. Love it.

Now this is defending Kola….