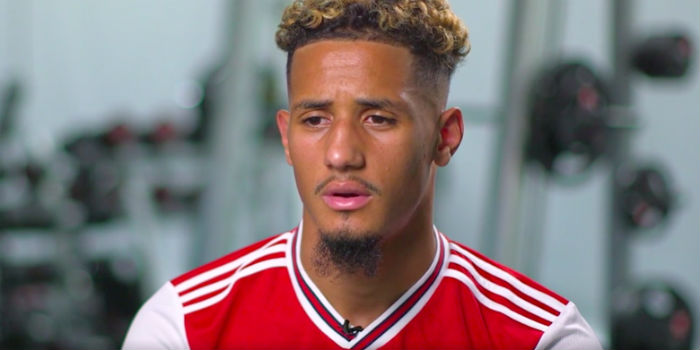 William Saliba says he didn’t think twice about joining Arsenal even though neighbours Sp*rs made an attempt to hijack our deal at the last moment.

After protracted negotiations, it was today confirmed that the 18-year-old defender has signed a long-term contract at the Emirates and will spend next season back on loan at current club Saint-Étienne. The deal is understood to be worth in the region of €30 million.

“It’s a massive pleasure to sign for a really, really big English club,” he told Arsenal.com.

“This is the biggest club in England for me, so it was an easy decision. I didn’t think twice about signing here, so I’m really happy.”

Asked specifically why he chose the Gunners rather than the lot at the other end of the Seven Sisters Road, Saliba diplomatically explained, “Well, the history, the badge… since I was little, I’ve been watching Arsenal play in the Champions League and so on, and there are a lot of French players who have come through here.

“So that really helped me to make my mind up.”

Earlier today, the Gunners confirmed the loaning signing of Dani Ceballos from Real Madrid. The Spain international went on to say that both Unai Emery and Hector Bellerin had played a big role in persuading him to come to N5.

Similarly, Saliba says a chance encounter with Matteo Guendouzi helped strengthen his resolve to make the switch to Arsenal.

“Yeah, I spoke to Matteo [Guendouzi],” he revealed. “I even bumped into him at a funfair in Paris, and that’s where I told him that Arsenal wanted to sign me! He gently advised me to come here and explained what it was like.”

Gunners fans will have to wait a year to see Saliba in Arsenal colours, but he insists he’s going to spend the next 12 months doing everything he can to prepare himself for life in the Premier League.

On his decision to stay with Les Verts, he said: “It was important first of all because I wanted to prove myself for another year at Saint-Etienne, before I come to try and establish myself here at Arsenal.

“This is a big club, and when you come here, you need to be ready. So I’m going to try and have a great season with the club that developed me in order to be ready for Arsenal.”

I know he doesn’t help this year, but a very positive signing indeed. Hopefully he will be an established fixture for years to come here at The Arsenal.

Leno me, I’ll be your friend
Reply to  AmericanGooner

It’s a great signing for the future, absolutely. As you say he could be a mainstay in our squad from 2020 to the 2030s!
And without even kicking a ball we can claim a nice old ✌?✊?win over Spurs today!

(now let’s quickly sort a deal for Tierney, one of the infinite amount of wingers we’re linked with, and a CB who can replace Kos asap ?)

“He gently advised me to come here ”

I heard that his tattoo translates to “The Bart, the”

You can never have enough obscure Simpsons references.

For 18 he sounds like he has a mature head on him when he talks about his development. Will be watching the French league at times to watch his progress.

“Well, the history, the badge… since I was little, I’ve been watching Arsenal play in the Champions League and so on, and there are a lot of French players who have come through here.

“So that really helped me to make my mind up.”

In other words, this is a reflection of Arsene’s legacy to the Arsenal.

You Saliba some, and you Mustafi some.

If we do not bring in a Cback because of the Saliba spend, we will have Mustafi still in squad.

And the great French players who played for our club…

For that kind of price for an 18 year old, the club are obviously expecting him to be one of the top defenders in world football, so this goes down as a heavyweight signing in Arsenal books. It might not feel like it now, but in 5 years time we could see this day in a new light.

OR… we have a massive loss on our hands which will effect future purchases PLUS we can’t sell him on.

Also he has ONLY played 16-19 first team games over one season so the stats are over a very limited spread of games.

When he leaves on a free to join Real Madrid? (I’m joking fyi)

Think Holding, Chambers and Iwobi are the oldest of that lot and I really have hopes for all of them to make it at the Arsenal. Future doesn’t look as bad as it did a while ago, I guess.

This is a stupid decision. 1) He has no immediate impact. 2) We have a limited budget and even small money in installments will detract from priority areas we need to spend. It will compromise (or at least tempt a compromise) on the quality we bring in. 3) At 27m it is a massive risk for a young player. If he does not live up to hype, we are at risk to a huge loss with impact to transfer windows down stream. NOT to mention he will be hard to move on. 4) He has only played 19 competitive first… Read more »

1) Plenty of teams purchase players and immediately loan them back, particularly at that age. Would you have preferred that he join Sp*rs and become a beast and critical part of their team? 2) I would imagine that almost all of that £27m will be paid next year, or over instalments during the year, I still expect us to spend the £45m quoted as our budget not including Saliba. 3) Agreed, not all players live up to the hype but £27m now is what £10m was 5 years ago, or £5m was 10 years ago, the market has changed and… Read more »

I’ve read 4 articles today and all of them you’ve complained about this signing and been downvoted to hell.

Just accept that you are in the minority here and most of us are very excited by this signing.

Great signing, young aswell, but hate to put dampers on things and hope it doesn’t happen but with our luck he probably get injured towards end of season and wont be ready for us next season,,, sorry,,, u no what our luck’s like

.. Bumped into him. Hah! That’s the sort of pro touch up artist Sanlehi is.. Probably bought Matteo extra cotton candy at the fair and pop fizz at the end of it.

Sure it was an easy decision.

27m for an untried young player who’s only played a handful of games. Sure his stats look good.

Whopping big loss for us if he does not deliver.

And we won’t be able to off load him as easily as say Elneny or Jenkinson.

If my auntie had bollocks she’d be my uncle.

This is a really positive signing for our future. He has tremendous potential and will be a welcome addition to our group of talented young players.

Please someone must have all stats to our squads contracts and how much left are on them, Emery is building towards a younger resilient team that might God willing see us in 2 maybe 3 seasons having a side capable of actually having a go at winning PL, im fully prepared for another season and a half of ups and downs to see progress and to see us shift some of the overpaid players not good enough, starting to feel a bit more positive, we are slowly going in the right direction..

This kid could be special, we have to develop him right.

It may bear compromise on the still existing Cback and winger requirements.

I guess you have to speculate to accumulate as they say. You’re right about the lack of any immediate impact because of the loan back of course, but that was obviously important for his club. The absolute key question – and you’re right again here – is what about next season? The current defense, as a unit, is a shambles and that won’t change enough – even with the return of (the very good) Holding. I really fear we’re going to come unstuck quickly unless Emery can bring in at least one more central defender.

according to transfermarkt he’s signed until june 2024, which is only 4 seasons after he comes to us. A little bit unfortunate considering he’ll be just 23 when his contract is up. I love the signing, believe me, but that seems like a pretty risky deal for us. If he lives up to the hype he’s absolutely going to walk away to one of the really big clubs and if he doesn’t live up to the hype I think we lose a lot of value. Getting guys like Guendouzi, Mavropanos, and Bielik who were similar ages but a lot cheaper… Read more »

Despite the downvotes, you’re not wrong. I’m happy we got him. It’s ambitious. I’m tired of us signed washed up has-beens and this is a bet on the future. Sure it can go wrong. It has done so with so many other signings. We are where we are, and at least we’re still attracting potentially great youngsters. Of course this could end up a big loss. It could also end up brilliantly. I can think of many many worse signings than this. I have to hope we’re in a better situation with contracts that we have been, and won’t be… Read more »

I agree, but we must look at the immediate problem and that’s what are we going to do about addressing the existing and critical problems for the coming season? I guess I’m asking what kind of situation is Saliba going to find when he joins us in 2020/21? None of the defensive frailties seen (particularly) at the end of last season have been addressed yet. Yes, Holding’s return will certainly help but that won’t be enough in itself. The deadline of 8 August is coming up fast.

“This is a big club, and when you come here, you need to be ready…. The highest point for me

Yes, but we’ll have to wait and see what he’s actually like when he finally arrives. Goodness knows we need some quality central defenders and I really hope that he’ll be one, but there’s no way of knowing, as opposed to hoping, yet.