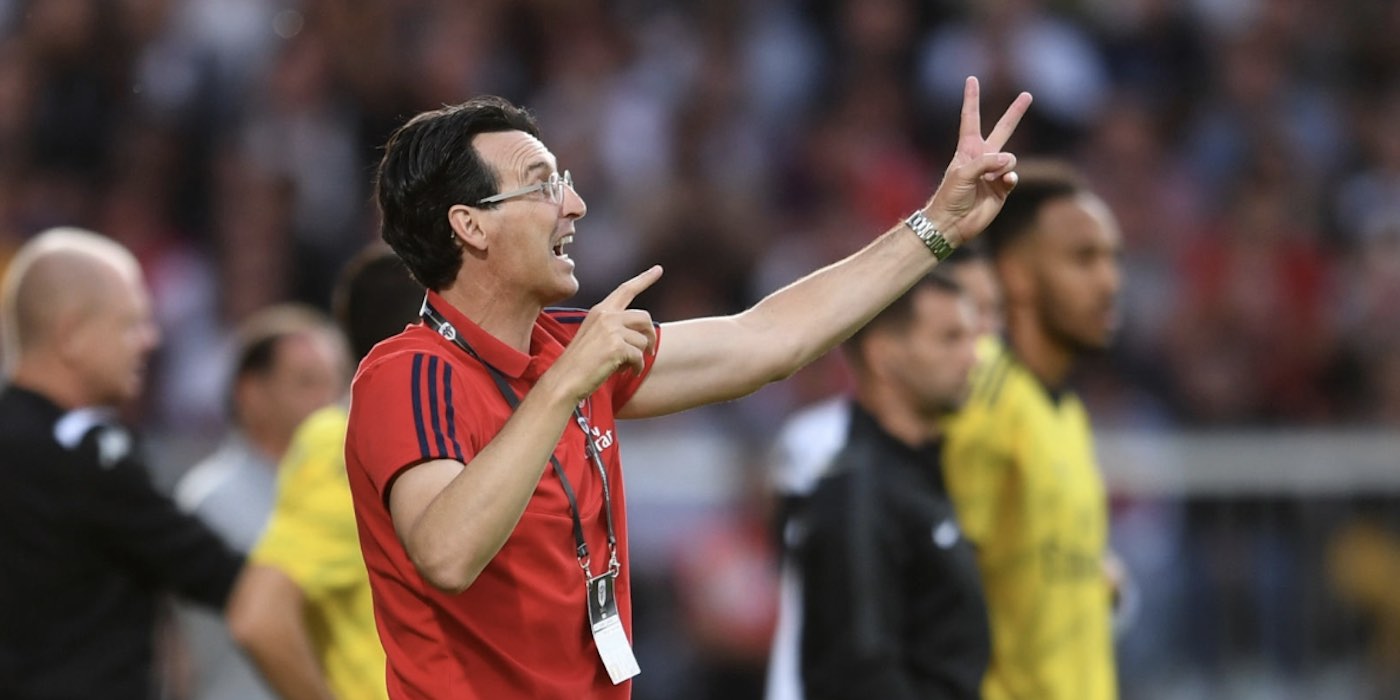 How many of you waited all day for an Arsenal announcement over the signing of Nicolas Pepe?

Meanwhile, Arsenal didn’t announce it even though we all know it’s done and they’re just waiting to maximise the impact of the #content.

Unai Emery was asked about the capture of the Ivorian international after the whatever the hell happened against Angers.

He said of Pepe, “He played here in Angers a few years ago, and then in Lille. He has progressed as a player.

“We are speaking about a lot of players, we want to select on players who can really help us, give us big performances and improve our squad. We have different options.

“This one at the moment is not closed, but he is one we are following.”

As for his ability to play with Aubameyang, he continued, “Yes first because he is left footed.

“We have a left footer in Bukayo (Saka), a young player who has a big future for us. For example on the winger one left-footed player can play on one side or the other.

“It can give us different options.”

Our first option is gonna be a £72m signing though. Woo-hoo!

Seriously though, what’s with the delay? Theories?
I have enjoyed the general response to every non-pepe tweet by the arsenal account though.

Still looking for a drone…

VAR will solve the problem
Reply to  HelderHughes

Honestly I’ve quietly smiling all day every time I think of “Nicholas Pepe!!!” In my head and ive been thinking of him quiet a lot ?…it’s like when you think of asking out that girl at your office u have a quite liking to and then suddenly out of nowhere, the hottest girl u never had a chance with comes to u and asks you out…and u wake up next day feeling all smug..?…
“Nicholas Fucking Pepe”….who would have thought…heh!

How did you gents feel when you realized it’s 90 percent true…?…I’m sure one could write a book about the emeotions each of us felt!

The delay is, I am 132% confident, PR #content management. The big news of today is the match vs Angers. Tomorrow, or just before the week end, it’ll be Pepe.

It’s just like music. An album might have 12 hits on it, but they release them slowly, one at a time, stretching out the value to create sustained album sales and excitement while the band tours and then creates the next album.

Kwame Ampadu Down
Reply to  Mpls

22% more confident than the maximum effort a player can give in a match – wow !

Mpls
Reply to  Kwame Ampadu Down

They’re waiting until Friday for the Arsecast.

Maybe his salary demands or the agent fee. And – conspiracy alert – Palace had softened on Zaha, so they must choose.

Raul milking this one .

Can’t wait for Pépé to join!

Meanwhile, who wants another Kieran at left back? ?

Haha you referring to the Ox??

What gibbs you that idea?

Kolasinac, Mustafi, and Ozil all on the way out?

No Jenkinson in the squad tonight either

Variety of reasons for the delay:
1) Updating/upgrading AWS servers so the site doesn’t crash the moment the news is released
2) Creating a kick-ass video of Pepe which is 10X cooler than Post Malone feat. Will.I.Am Saliba
3) Flying drones over Emirates to capture the perfect shot of Pepe holding the banner ‘Our new #19 here to own 2019’
4) Ensuring Kolasinac is present at the Emirates as a bouncer to avoid scum like John Cross entering the stadium..

But we all know it’s done.

I’m going with this one– final answer.

Announcing Tierney and Pepe at the same time?! ???

I thought it might be announced after the match. Hence this late check on this site for an update. I’m also slightly nervous because this is a big player with further potential, in an area we needed to strengthen. Also Emery’s playing identity needs a good winger. I’m also nervous because we seem to be suddenly very efficient in the transfer market on a huge deal, when we thought we were scrapping due to a reportedly limited budget. For PSG or someone to gazump us at the last min would have been crushing. However, it now seems to be all… Read more »

They’re just messing with us

Great! But what about defense? We need 3 players there.

Its a good signing but we back load which may compromise future markets if we still don’t hit the heights. Then again you have to risk to get reward. BUT I wonder if a cheaper deal for say Ziyech (or Fekir) would have been good enough without the risk to failure being so high. Particularly with Ziyech and an ally at Ajax in Overmars, we could have been creative with deal making, thrown in Mavropanos for a loan (as they have shed De Ligt) and cut the price down to something very minimal but without as much exposure 3 or… Read more »

Santori the killjoy or roadkill?

What in hell are you on about Santori?

More rumours on Rugani. Potential loan for two seasons. We are truly in loan world now. Not sure about this player. Opinion seems divided in Italy. Its a risk bc he will come in late which will take time to settle him in as well. Yet again we have impact to start of season bc business for priority area isn’t done earlier. And I think we are making it unnecessarily complicated with Tierney (if true). We need to expend the maximum amount for the best Cback. Instead it looks like we are cutting corners with another ‘clever’ loan move but… Read more »

Breaking!!….my itk source just told me now that ARSENAL is about to wrap an expensive quality defender soon… But he refused to give me the name as he claimed it is a surprise

I feel for everton soares…i guess Edu promised him a transfer to arsenal..but now it seems unlikely unless something outstanding happens….it is a shame though because i preferred him to zaha and i wanted him on the left wing…imagine an attack like this

What a team!!
Mouthwatering!!!
Beasty!!

I bet what a team is gonna do better

If the plan is to go full on attack and have surplus quality to sell the least of them next summer to fund everywhere else as we want , then you might still get your Soares dream

“i guess Edu promised him a transfer to arsenal”

Mouthwatering can mean vormitting to a different person.

I don’t care really…..
Money should have been spent on de ligt in my opinion considering our defence is utter wank…

The Board
Reply to  Me2

Please fax us your resume and we’ll be in touch once a position becomes available.

Pat Fried Rice
Reply to  Me2

You’re saying like De Ligt wants to come play Europa League for us.. i mean.. the fuck?..

The Arsenal Way is that we are s Gentlemen club and we dont talk about plsyers from other clubs. Oh, unai was just speaking about our own player. #dealdone! #PAL

I heard that because of the massive fee, we had to finance it through retrenchment of certain staff. Msybe the social media marketing guy got terminated and edu is still figuring out how to create a vid for pepe like the one on saliba.

So what if our defence is shite, we’re gonna twin the old fashion way: scare more fking goals than the opposition do!

Well, scaring goals was how they used to twin in the old days..

I like that he sees a great future at Arsenal for Saka.

Obviously he doesn’t want to give anything away but the continuing delay is a little unsettling. We’re either just picking the right moment for an announcement, or there is a last minute problem.

Finally… For the first time in forever, the new season is about to start and all I can truly worry about is our tactical approach to each game of the season not Personnel.

“Hopefully the defence will be sorted … ” . That’s saying it. There’s still time in the window but it’s running out and, frankly, at the moment the defence is a mess.

Latest news on the Pepe transfer: Lille director general Marc Ingla has explained the reason for the delay. “There are administrative details,” Ingla said. Well, that’s cleared things up, hasn’t it! Anyway, looks like there’s a paperwork problem if anything so, hopefully, things will be sorted out (fairly) shortly.

“My Sauces” have confirmed Arsenal are holding on for the triple header announcement of Pepe, Tierney and Mbappe on Monday