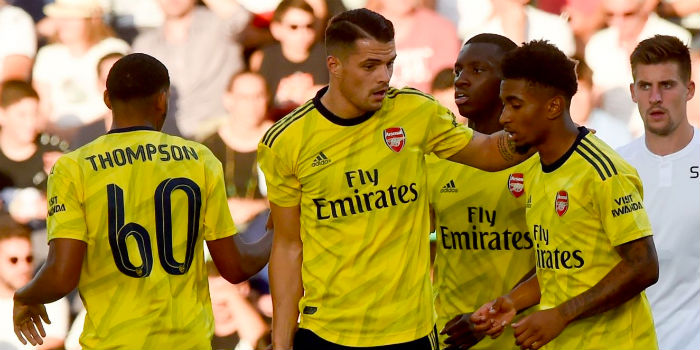 Our very young starting XI fell behind after 13 minutes when Farid El Melali collected a neat pass that sliced open our defence, took the ball around Martinez and rolled home into an empty net.

It took another 12 minutes for the Gunners to threaten and even then Nelson’s effort from the edge of the box scuffed wide without troubling the keeper.

The home side thought they’d doubled their lead on 38 minutes when a floated free-kick, awarded after Medley picked up a booking for a clumsy foul, was bundled home at the back post. The offside flag came to Arsenal’s rescue.

Moments later Martinelli’s flicked header from a great ball by Mustafi flashed just past the post. The Brazilian, who started on the right of the attack but switched to the left, was a bright spark in a very low-key opening period.

Guendouzi, out on the right, found Nketiah with a bouncing cross and when the striker’s effort was blocked, Nelson slotted home the rebound with his left foot from seven yards.

The Jeff, sold to Angers this time last year, made a couple of lung-busting runs that caught the eye but the game was mostly scrappy.

That said, the introduction of Aubameyang and Mkhitaryan did inject a bit of urgency into our play going into the final thirty minutes.

First, the Gabon international had a goal ruled out for offside and with a couple of minutes remaining he missed a sitter having started a flowing move that ended with a Mkhitaryan shot being saved into his path. The striker’s first time effort flew over.

More worrying than our profligacy in attack was an injury to Nelson who collided with the Angers keeper and was left in a crumpled heap. He was substituted immediately.

Much to the surprise of everyone, there was a penalty shootout at full time. It went like this:

The Gunners now have a couple of days back at London Colney before heading to Catalonia to take on Barcelona at Camp Nou.

Emery sending out a haunting message with Mustafi being only one of three players to stay on for the full 90mins :/

I heard monaco made a bid so maybe it was a fitness type thing. If we could move him on it would make room for younger talent like holding, chambers, and even beilek

Say it ain’t so Jack…

Not so sure, looked like the starting 11 could have been a Europa League starting 11, hang on to my dreams

If the intention is to start Chambers-Sokratis, they need to be playing as much as possible together now.

Again Holding comes back in Spetember.

If we are bringing in a strong experienced Cback, he can start in the deep end.

Anythingelse and we are reliant on Chambers-Sokratis for the kick off.

So not sure why we are playing Mustafi full 90 unless it looks 50-50 we are doing anything other than Saliba.

Which if so is not the immediate improvement we need.

Nice result! Where is Pepe please? 🙂

Pépé will be announced alongside Tierney to maximize the effect. This is only based on what I would do if I were them. Meanwhile I would have been preparing 100000 shirts to be sold to elated fans.

Tierney will be a good signing but not the player we need now.

We need a Cback.

And we need the best we can get.

Spending on Tierney will distract from that.

is Emery less concerned about him getting injured in a meaningless friendly because he will not have him in the season? Please ? Please!!!!!

Or is he giving him a chance to put himself in the shop window? Good stuffs happening let’s stay positive people!

I won’t say its all good stuff. Saliba has no immediate impact and big risk at 27m so not entirely a hit. Cebellosis decent but we kick the can down the road to next summer. Pepe will be good although I wonder even so if Ziyech at 22m plus add ons is a good enough deal which does not back load us. Tierney is a good signing but not necessary to concern with this summer. He may also likely affect the pursuit on the Cback we really need to come in. There is NO guarantee we are going to sell… Read more »

Keeping Mustafi is just a bad idea. I am very much against the booing he has faced but should he stay, he would be one vital mistake away from being unplayable. I mourn about him fairly quietly, but frustrated fans will boo him all the way every single time. We all know he has that mistake in him locked and loaded for the season. He does plenty good, but his lapses are incredibly outrageous, and in the PL you pay every time.

Thanks for the goal against Spurs, and good bye.

I am looking forward to Nelson breaking through first team this season, I believe he can do it.

That Angers goal scorer was an annoying turd

Angers you does it?

Anyone else turn the game off after 90 minutes unaware of the penalties?

Ah right, that helps. I would always stick around for Keyes and Gray normally but this time I had to sit on a bed of nails listening to the Jonas Brothers new album. Who wouldn’t prefer that?

The players were exchanging shirts, their keeper was chatting with Martinez and Aubameyang, and suddenly there was a coin toss to decide the penalty order. No one had any idea it was coming. The least stressful penalty shoot-out I have ever witnessed.

Put on another decent display.

Hope he is with first team regardless of Pepe or whoever coming in.

Angers first shot in anger came quite early in the half

Learnt nothing from this game so best Not look back in Angers. I hear you say

Kroenke the Klown
Reply to  Snagger

Any ideas why Leno isn’t playing much?

Injury but not much info on what just now.

He bernd his finger

To be honest, a pretty poor overall performance although obviously there were many changes. Defensive weaknesses persist and while Tierney is thought to be coming after all, he won’t be enough to restore confidence that we can improve enough. All successful sides are built on a solid defence and, for a number of reasons, we just don’t have one.

This was barely a second-string side to be fair.

Tierney is not what we need.

If we sign him and no Cback, we are inherently weaker particularly if Mustafi is also sold.

Its very thin back there at Cback.

Again if the intention is to rely on Chambers next to Sokratis, why is he not starting there and why are we not familiarising them with each other as much as possible?

Holding comes back September.A new Cback (unless very accomplished and even so) will have to bed in.

If Mustafi is sold, Sokratis gets a card or a knock, who do we start?

Very risky at the moment.

Well, it looks like Tierney is coming, whether or not he’s what we need. I would question exactly how much weaker we are without Mustafi. He’s pretty useless and I’m sure that we can, one way or another, compensate for the loss of his dubious “expertise”.

Don’t think so – look at who played (albeit not for the whole 90 minutes).

Nice of Jeff to spare us the blushes. BUT good run out for Martinez again and he did the business as he has been doing pre-season for most parts. very promising. Not sure why we were starting so many young players. Too close to kick off of season to be doing this and we should already have formed good idea who can compete and who needs more work. Would have run the first choice Central defense pairing ahead of Newcastle. We only have one pre-season match left and it would have been good for them to have as many minutes… Read more »

I wouldn’t have the penalty shootout for a occasion like this. It forces a winner. Why commemorate the centenary with a defeat?