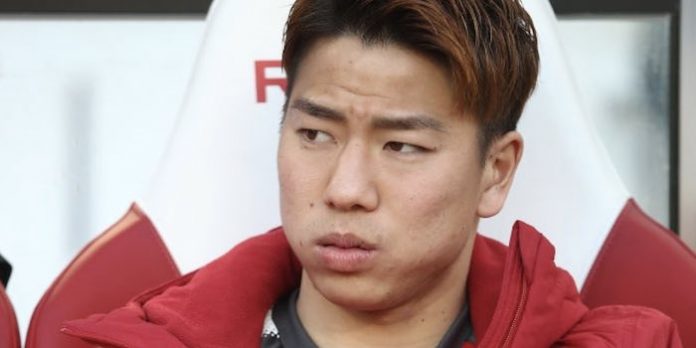 According to Serbian publication Mondo, Takuma Asano has sealed a permanent move to Partizan Belgrade.

The Japan international, 24, appears to have penned a three-year contract with the SuperLiga side who are managed these days by former Aston Villa striker Savo Milosevic.

It is reported that Partizan will pay us a £1 million transfer fee in three instalments, which means we’ll make a £2.5 million loss on a player who Arsene Wenger signed from Sanfrecce Hiroshima in July 2016.

Asano, who never played made an appearance for the Gunners, was first linked with a move to the Serbian capital at the start of the month. He’s spent the last three years undertaking loan spells VfB Stuttgart and Hannover 96.

Best of luck in Serbia, it’s a shame it didn’t work out for you in London.

Shame the latter Wenger lost his touch. A whole generation of French wonder kids seemed to slip by us, old Wenger would have had a few Arsenal players from that World Cup winning squad. Wonder if it was the poor scouting or that he just couldn’t pull the trigger on a deal anymore.

Gendouzi is a great start on getting back to some really talented French footballers.

Yes, Wenger certainly did lose his touch. Take Mustafi for example … please, please, ANYONE, take Mustafi! Asano was a snip of a loss, but our old mate Mustafi is a gold-plated one at £35 million and a huge salary as well. Hopefully, the days of such transfer madness are over – after all, we haven’t got the money to burn anymore, have we.

Blaming Wenger for signing Mustafi is unfair. He was a member of the German World Cup winning squad when he was signed. Seemed to be a good acquisition and made an excellent start when in his first 17 matches we were undefeated. Yes it turned out badly and he should have been sold a long time ago but all managers sign players who don’t work out

Excellent start? When was mustafi ever excellent?

When he started. Hence the phrase “made an excellent start” which he did, if you watched the games.

Maybe slightly but he did continuously try to sign Mbappe from 16, so he could still see a gem or two.

Yeah it seemed he still had an eye but was scared to pull the trigger on a young in when the price tag was 20 and above. Look at saliba, I think he wud of wanted him but we wud here in 4 years that we Ger wanted him but he’s now worth 100 plus just like he did wit mbappe

I think your keyboard is broken

Shame it did not even start for him at Arsenal.

Good luck to him, but what a waste of time that Wenger transfer was. OK, huge sums aren’t involved but he didn’t kick a ball for us and we’re down £2.5 million for the privilege! That’s the way (not) to do it. Now, how are we going to spend that first instalment of £333,000? No chance of putting it towards a (very, very small part of a) good quality centre back?

You have to take risks with young or unknown players. Webger took risks with Kolo Touré, Lauren, Nos, Adebayor

Although we technically lost £2.5m on the sale of Asano. we would have profited from Japanese shirt sales and a lot more exposure to that market/area which is hard from the outside to financially quanta-size.

I think you significantly under rate the J-League. They couldn’t give a fook about Asano shirts, no offence to the lad. They have the likes of Iniesta, let alone a crop of talented players coming through. The J-League is a very exciting league, shame work permits makes it nigh-on impossible to have dibs over there (like Kubo, the Japanese Messi kid). Barely even registered to them, as many players go out of Japan form many reasons. You do them a disservice if you think Asano brought about shirt sales. Also not sure where this misunderstanding that shirt sales revenue comes… Read more »

Not quite. The margin on shirts for the club is quite considerable, especially if you add the naming/lettering. High volumes of shirts is good both for the manufacturer and for the club. You only get numbers linked to sales of a specific player when they are extravagant (i.e. Ronaldo at Juve) so we’ll never find out about Asano San…

The idea of clubs recouping transfer fees through shirt sales is a complete myth. Clubs get an annual licensing fee from the manufacturer, but only a small cut of the revenue from actual shirt sales. The industry standard is that the manufacturer retains about 85 to 90 per cent of the revenue. So, recovering Asano’s transfer fee through shirt sales alone would have required Puma to sell about an extra £30 million worth of shirts. (And when I say “an extra £30 million”, I mean that you have to exclude people who would have bought an Arsenal shirt anyway, but… Read more »

Do people still believe this shit? Just because you sign an Asian player doesn’t guarantee you some shirt sales. Asians aren’t backward idiots who just buy shirts because some kid plays for a European club. There are plenty of big name Japanese players and plenty of big names players (like Poldi and Iniesta) who play in Japan. They don’t need an Asano shirt. When will the ethnocentrism stop and people realise that clubs sign Asians because, like players anywhere else in the world, they may end up pretty good footballers. It’s also easier to take a punt on an Asian… Read more »

A few more AFC shirts (not fakes like in may countries in Asia) will have been sold because of him but nowhere near enough and that money would pretty much all have gone to the kit supplier rather than the club. There would probably have been some loan fees as well. However in these days of ‘Partnerships’ (aka sponsorships), having a Japanese player on the books (even if he’s not playing) is a great benefit for gaining Japanese partners. You need to take a risk on some players and understand that one win makes up for 10 failures, but there’s… Read more »

Give it a rest with the anti-wenger bullshit.

This is a story about a young inexpensive signing who didn’t work out. Every signing is a gamble and many aren’t successful, even expensive ones. For what it’s worth Wenger more than held his own in this regard.

Next weeks wages for Mesut sorted then.

Goodbye and best wishes to TA. Sadly you were only a passing craze for us.

And now our transfer coffers are positively bulging with all the cash from our out going players!
I’m sure that by the time the window closes our net spend will be practically 0????….…. Maybe???

Well that was worth it..

Almost as strange as the Park Chu-Young signing. Although the Korean did actually play (and score) for us.

How is this strange? Taking a cheap punt on a young player and it not working out. This is like the least strange thing in modern football.

The culling continues. Even if we took a loss this is good it’s been obvious for some time that he wont ever be of the required level so we need to cut our losses and invest our time and resources on others who might. As with all our explayers I wish him the best of luck in future endeavours.

Yeah good luck to the lad, it was a gamble but I’m glad the club no he’s not up to it and are moving him on.

You need to remember the context: this was when summer tours of Asia were all important and Asano had a high profile in Japan. I’m pretty sure we shifted the signing fee’s worth in shirts in the first three months. When it looked like he wouldn’t make the cut, we loaned him to remain cash neutral.

Not an edifying story, but not the waste of money you would think…

“Asano had a high profile in Japan”.

Pretty sure he didn’t.
And see my previous comment above in regards to the shirt sales myth.

Partizan are in the Europa League qualifiers so we may see him again soon.

How come every Asian player that Wenger ever signed was rubbish? Leicester and the Spuds managed to find top Far-East talent but all we did was sell shirts in Japan with duds.

To be fair to Junichi Inamoto, he played in that beautiful win over Leverkusen. Not only did he sell shirts, he sold tickets for that game too.

Went on and scored goals at the world cup that year and my gooner friend asked me why we don’t sign a player like him. My reply that we had just released him earned me a few dollars on the wager.

A £2.5 million loss is not much in the scheme of things.

But the Sanchez fiasco will haunt us for a long time.

Won’t sell at all…right up to transfer deadline day… then £60 million to City….but No, that collapses…. only to lose him for zero to Utd in January….. AND find ourselves lumbered with Miktaryan who we didn’t need on a higher salary than Sanchez had when he left.

It wasn’t sabotage. But it gave a passing impersonation of being as much. And must have cost us £70 million. About what we might be paying for Pepe.

Every pound is a prisoner!

Is it really a net loss? Did we not get loan fees on him, so actually potential profit overall?

I understood he couldn’t get a work permit to play in the Premier League when he was signed so we sent him to Stuttgart on loan and he had such a good season there they kept him for a second season. I’m not sure if it was felt he wasn’t up to Gunners standard but by then we had our attacking options covered anyway so he wasn’t recalled.
No great loss either way so all the best to him if he gets to play regularly somewhere.

He had a decent season.
Then they got promoted and he basically and sadly wasn’t able to cut it.

Which is a warning for wonder kid believers. Miyaichi as well, the Jeff was popular at one point. Now its Martinelli. Sure you say he’s different bc he is Brazilian but a word of caution, there are A LOT of Brazilian wonder kids. We may think we are stacking up well but we also have to be concern with how our rivals are adding. United in talks with Juve for Dybala. Potentially Milinkovic-Savic. These are very good players. Bruno Fernandes still out there. Pulisic looking good at Chelsea too. Have we really reinforce as well as we could. I’m not… Read more »

The Jeff has turned out to be pretty good. But I guess he wasn’t wunderkind enough, so we let him go.

I doubt we would have made a loss on him. We must have received loan fee for his previous adventures and selling him now was inevitable as he has no role to play with us. Good luck to him and job well done by transfer team.

He has a lot of the ingredients of a very good player – pace and tenacity in particular, but didn’t progress as he might have hoped. The sort of player who is worth a punt at a low price.

This is more like the pace at which we were functioning in the last summer transfer window. It’s almost as if we are an elite football club determined to allocate our resources better. More of the same please.

We didn’t even see him in pre-season friendlies, did we?