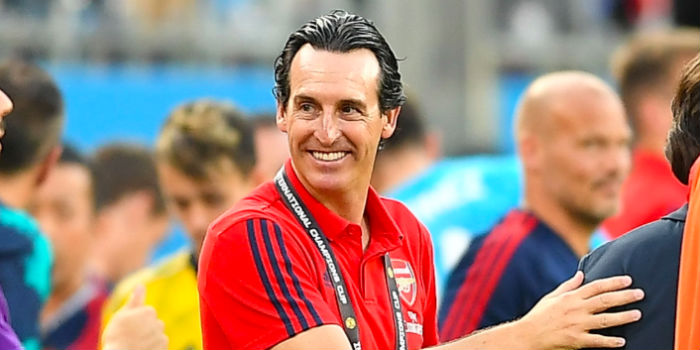 Unai Emery says Arsenal are happy to remain patient in their quest for new signings even though the transfer window closes in just 19 days.

After the departure of several high profile players and with club captain Lauren Koscielny trying to force an exit, it’s no secret that the Spaniard needs to strengthen his squad in several areas.

There have been links with a string of big names and a raft of promotions from the Academy, however, to date, the only completed business has seen 18-year-old Brazilian striker Gabriel Martinelli arrive from Ituana.

Deals for Saint-Etienne’s William Saliba and Real Madrid’s Dani Ceballos appear to be close but with the former set to be loaned back to his current club and the latter only arriving on loan, it still feels like there’s a lot of work to do, particularly in defence.

“I am patient because we want to choose the best solution,” Emery told a press conference after Arsenal’s 3-0 win over Fiorentina in Charlotte.

“Some players are very expensive and we are waiting for this possibility because we don’t want now to go to the second line of players. We are waiting and really we have very good young players.

“We are aware we also need to improve some areas in this squad. But I only want to sign three or four players only if we can be sure they are coming to improve our squad.

“There are a lot of names and the club is working. Edu is very close to me every day and also with the Kroenke family.

“I want to send a message to all our supporters that we want to [build] the best squad possible.”

For what it’s worth, the Spaniard feels as though his making progress with the players he does have at his disposal. With a few players yet to return from their summer holidays and a couple of new signings he feels the club are well-placed to close the gap on their Champions League rivals.

“We are preparing every player and some players need to come after their work with the national team. The players here, the young players, maybe it’s the moment to show how we can use them to help us now and in the season.

“With other players we can prepare tactically with our structure, being competitive. We know last year we had positive experience to continue in our way. We reduced the points to teams, we were one point only from the top four.

“We need to do more. One more step with that young players. We’re working on the possibility; I’m positive about signing good players to help us. We’re working very well.

“I am very happy with every player. We are working behind the scenes to improve with some players from the transfer market.”

Arsenal has good control, we can expect several signings next week. I still believe we will have an interesting transfer window

Saying it, and actually doing the business in our weakened financial state are, unfortunately, two entirely different things. It’s financial constraints that are preventing us from undertaking “straightforward” transfers so we have to offer complicated deals.

My only anxiety right now, especially after yesterday game, is Mustafi. By 20th minute he had made two errors a better team would certainly exploit.
We need a better CB if we want to make that long overdue step forward.

Our defense has been looking quite poorly in some of the friendlies recently, particularly when Mustafi is in it

But remember: “I am very happy with every player”. I think he missed a ‘nearly’ in there.

I don’t really understand why we are persisting with him. Probably because we are stuck with him I guess.

I’ve liked what I’ve seen with the young players. There are reasons to be positive.

This is pre season… and Arsenal could also be putting him in the shop window?

If so i think it was ill advised 🙂

Might be better to put him in the bargain basket next to the checkout.

Window closes a fortnight on Thursday and it will be no good humming this little song on the morning of August 9th. The defence in particular has to be addressed and that was before Kos stated his intention to leave. It is particularly galling that he sites the Kronkes. It’s like he’s box ticking all the corporate cliches needed to get by. They – in theory – have no say on recruitment and it should be down to him, Sanhelli and now Edu. If we wind up with one new Centre Half that we have to loan back to St.… Read more »

I don’t think we’ll buy one. If we’ve bought saliba for next year and holding is considered good enough then I think they’ll only buy players they consider better than those. No more stop gaps. Sokratis is decent but not great (still, probably good enough for this team to push into top 4 if we had two of him) but I can’t see us buying another CB to add to the wage bill who won’t improve us long term. I really think bielik should be retained as a CB and as the first alternative option when either sokratis or holding… Read more »

“It is particularly galling that he sites the Kronkes.”

We might not like them but he has to work with them. What part of his situation or the club’s situation would be improved by Emry going into a press conference and announcing “Good Ebening, the Kronkes are all Cockbadgers”?

He’s worked at PSG, so I’m going to defer to him on how to deal with bloody awkward club owners.

He’d be right though.

Jorge Mendes reportedly acting as an intermediary for Arsenal in a €80 million deal for Nicolas Pepe ….. We need wingers and full backs, who can carry the ball and dribble, it’s the reason Zaha makes a lot of sense, only Hazard completed more dribbles than Zaha in the PL last season. Pepe scored 23 goals (9 penalties) and 11 assists last season, and is 24. I’ve never seen Pepe play, but if Zaha is being quoted at a similar sort of price, maybe going for a player 2.5 years younger, might be a better bet? Even if he isn’t… Read more »

There could also be an element of playing the Pepe transfer as a ruse merely to push Palace into selling a want-away Zaha to us for less than the ridiculous amount they want. After all, looking purely at end product, they value Zaha for close to the same price that Hazard went for, and Hazard is a far better, more consistent, player.

We’ve been a pretty patient bunch for a while now.

“I am very happy with every player.” Mouthed Emery through gritted teeth.

LOL. I am actually thinking the same.

How do you mouth something through gritted teeth?

I know Mustafi is not the only player we need to sell, but is no club even willing to take him on loan? His confidence looks low, I feel for him (a bit), but he needs to go. As for signings, let’s get on with it, pre-season is perfect time for new signings to bed in, and there isn’t much of pre-season left.

Imagine if it was bale

I think the plan is falling into place. We are going to swap Mustafi for Bale. Clearly the plan all along. Obviously Bale’s wages are an issue so Zidane has agreed to take both Ozil and Mkhitaryan to help pave the way. Everton Sorearse will sign for Arsenal tomorrow. And Everton will sign the French under 19 star “Arsenal Henry”. Aston Villa have already signed a player called “West Brom Smith” from the Welsh League. Edu actually stole the replica of the 2002 world cup on his way out of the office for the last time, never got caught, and… Read more »

There won’t be any announcements until the middle of next week anyway, nothing will be confirmed until everyone’s back from America.

The pressure is building as we near the 8 August deadline. The main problem is pretty obvious now: we just don’t have the money up front to offer “straightforward” transfer terms. All the potential deals being reported are based on either extended instalment repayments (most of them), immediate loan backs (Saliba), loans only (Ceballos), and extended add-on payments (Tierney) – all designed to cut down the money paid initially. Good from our viewpoint, but it’s not rocket science that selling clubs aren’t too happy – hence the delays. I guess we’ll bring in some new players – there’s too much… Read more »

As a Celtic fan, I’m not too sure why we wouldn’t be happy about spreading out the fee; we are in an unprecedented period of dominance that may well be coming to a close, and guaranteed future revenue should be very appealing in my opinion. We’ve already done most of our major transfer business for this summer (including a left back), and so I would think it quite prudent to secure a few million coming in each year for the near future instead of getting £25m immediately.

I think we can be patient as most of the guys we are trying to bring in are not available to join up with squad. Saliba, Tierney, Zaha, Everton soures . Etc we can try and get them over the line for the best price

If they can complete deals for saliba, everton and Tierney, that would be grand, but the centre-back situation is desperate. If we don’t get one decent player in there, we are fooked!

My patience wore out when we shit the bed and missed a champions league spot last year. For me, that was a disgrace and I fault emery. He’s done for me. Say whatever you will about Arsene Wenger and all his faults, he would have got us 4th and we wouldn’t be in this shit predicament.

That was on Emery, but he deserves another shot this year — after a tepid first season, he understands our players, our club, our fans, our rivals, our opponents, and our league much better. He’s got more help in Freddie alongside him, and the potential for new players, the rise of young blood in the squad, and returns from injury, all give me reason to be supportive and to see what he can do this season.

I will always support Arsenal. I just don’t think emery is the right guy for the job.

If our realistic goal is champions league qualification, we needed a defensive minded coach like the twat Chelsea had twice (barf).

Emery? I put it more on the players.

Wenger has failed to get us into the CL the last two years, points wise we were going backwards in that second year so I definitely don’t think he would have got us 4th. Sadly it was his time to leave, I wish it had been different but the facts were staring us in the face and it was time for us to move on

Why are my comments being moderates and deleted. I’ve not done anything wrong.

Hey, support for Wenger has always been in moderation …

This is normally the case. Most people have no idea how transfer market works. Its a market, demand and supply. Plenty of demand for instance for wingers but also a lot of options and the apex predators (a bunch of them) have feted – RM with Hazard, Barca with Greizzman, Athletico with Joao Felix. Maybe Bayern, Spurs may be in market for wide player still) But we now have less competition and the price on the remaining players – Neres, Lozano, Ziyech, Fekir, Carrasco, Everton) will climb down as we approach end of window. Going rate at the moment seems… Read more »