THE LOWDOWN
Arsenal face Bayern Munich Frauen at the Emirates Cup, which represents their first game at Emirates Stadium since enduring a 4-0 defeat to Liverpool there in 2013 (Arsenal hit the woodwork four times during that match and Liverpool scored 4 goals from a total of 7 shots!) The WSL winning women’s team will provide the undercard for the men’s match against Lyon later in the afternoon.

Arsenal are still early in their pre-season preparations, the players that played in the World Cup Final and the third-place playoff are still on their holidays, those that did not participate in the World Cup have been back for a fortnight now. However, this represents a solid marketing opportunity for the women’s team, with the likes of Manchester City and Chelsea hosting their opening WSL games in their men’s stadiums.

? “For us to be the best we’ve got to play against the best – and that's exactly why we're playing @FCBFrauen in the Emirates Cup. We can’t hide behind teams that we’re better than."

Bayern are interesting opponents too given that the Gunners have signed six players from the German side since the summer of 2017- adding a further three this summer. You can hear from one of them- goalkeeper Manuela Zinsberger- in this month’s episode of the Arsenal Women Arsecast. After this, Montemurro’s side will face Wolfsburg behind closed doors in Austria on August 7th, Barcelona at Boreham Wood on 14th August, West Ham behind closed doors on 18th August and Spurs at Boreham Wood on 25th August before the season kicks off on 8th September.

The WSL trophy will be available for fans to have their photos with inside the stadium, in Block S from 11.30am on Sunday.

TEAM NEWS
Danielle van de Donk, Vivianne Miedema, Jill Roord and Beth Mead will not be available, they have yet to join pre-season training after their exertions at this summer’s World Cup. Pauline Peyraud-Magnin, Leonie Maier and Leah Williamson only began training again on Wednesday, so they certainly won’t be ready to start. Lisa Evans, Jen Beattie and Kim Little have been training for slightly longer and should be able to play some part in the match.

Manuela Zinsberger is line to make her debut in goal against her former employers. The game will come too early for Jordan Nobbs as she enters the final stages of rehabilitation from a cruciate ligament injury, while Lia Wälti is still not fit after undergoing knee surgery in April. It’s not clear yet whether Tabea Kemme will be fit to play as she also recovers from a knee problem.

Given the mixed availability of the first team squad, young players like Ruby Grant, Mel Fillis, Silvana Flores and Hannah Dawbarn should play. Flores’ brother Marcelo is also in the Arsenal academy. Paige Bayley-Gayle, Lachante Paul and Amelia Hazard have left the club this summer, while Ava Kuyken and Abbie Roberts have moved to US colleges on soccer scholarships.

LAST TIME OUT
The sides played a pre-season friendly in Seville in February 2016, with the Gunners running out 3-1 winners, Jordan Nobbs put Arsenal ahead with a typical long-range goal, before Sara Däbritz, who has left Bayern for PSG this summer, equalised. A double from Natalia Pablos gave the Gunners a 3-1 victory.

PLAYER TO WATCH
Viki Schnaderbeck’s debut season at Arsenal did not quite pan out as planned. On the eve of the 2018-19 season, she tore knee cartilage, an injury that kept her out until March. She made a few substitute appearances at centre-half towards the end of the season. On the final day against Manchester City, Viki started in defensive midfield.

She has switched regularly between centre-back and midfield during her career. This summer, Arsenal have brought in Jen Beattie to beef up their centre-half options, while Dominique Bloodworth has moved to Wolfsburg and Lia Wälti is still recovering from a knee injury. It seems likely that Schnaderbeck will become a regular in the Gunners midfield.

If last season was a false start for the Austrian international, then she can really kickstart her Gunners career at Emirates Stadium, playing her former club, as a teammate of her long-time best friend Manuela Zinsberger. There is a lot of responsibility on Schnaderbeck while Wälti recovers and a good pre-season will go a long way to re-igniting her career. 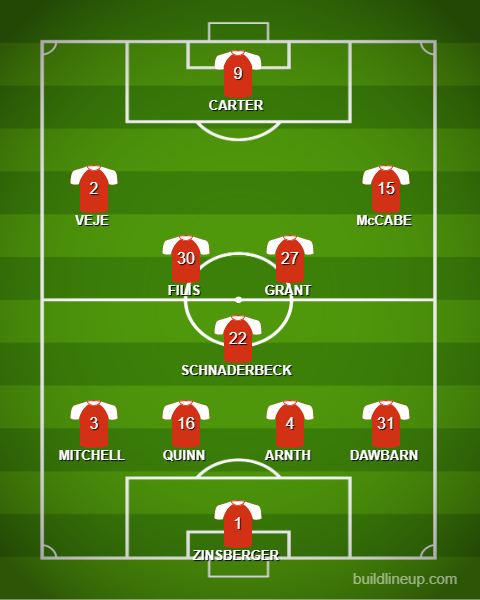 THE OPPOSITION
It’s been a summer of upheaval at Bayern, with coach Thomas Wörle stepping down after ten years in charge (his father Gunther was the previous coach). New boss Jens Scheuer comes in from Freiburg and Bayern have turned over some long-standing players. Jill Roord, Manuela Zinsberger and Leonie Maier have joined Arsenal, Gina Lewandowski has returned to her native US, Mel Behringer has retired, while Sara Däbritz has joined PSG.

In have come Danish defender Simone Boye Sørensen, Young Player of the Tournament at this summer’s World Cup Giulia Gwinn, German international Linda Dallmann, goalkeeper Carina Schlüter and Swedish defender Amanda Ilestedt. Bayern have finished runners-up to Wolfsburg in each of the last three seasons and hope this squad turnover leads to a revitalised title challenge. Bayern are likely to be without Dutch forward Lineth Beerensteyn due to her participation in the World Cup Final.

Right-back Laura Donhauser is my player to watch for Munich. The 17-year old has yet to play a first team game but has been utterly dominant at junior levels in Germany. This summer she has been handed Gina Lewandowski’s number 2 shirt, which is a huge expression of faith in her abilities and hints at a prominent role this season. She can play in a few positions but is likely to become a roving right-back and is considered the future of the German national team in that position.

HOW TO CATCH THE GAME
The match kicks off at 12.30pm on Sunday at Emirates Stadium. If you have Emirates Cup tickets, do be in your seat by then. Yes, I am your dad and I can and will tell you what to do. So also buy a programme, because I have three articles in there on a summer of revolution at Bayern Munich Frauen. Otherwise, tickets are still available here. The game will be screened live on Premier Sports too.

COMING UP
We will have reaction in the shape of Joe Montemurro’s post-match press conference, as well as some exclusive player reaction. There will also be previews and player reaction from the pre-season fixtures against Barcelona and Tottenham. August’s feature interview is with Danish pair Katrine Veje and Janni Arnth and will be published in a couple of weeks’ time.

‘We think she’s something a bit special’: Joe Montemurro on Ruby Mace

put ‘Arsenal Women’ in the title next time boyo, wouldve saved me a click

Or you could learn the schedule of the team you claim to support. Probably too much to ask.

Did the picture not suggest something? Did the word ‘frauen’ not suggest to you that the link you were about to click on would be strange and scary? (I don’t expect you to understand German – but come on….) – Or, did your limited knowledge of Arsenal’s fixture lists upset you? Apart from coming across as unpleasant (not only for those involved in the ladies team) it just shows your complete ignorance on so many levels. Fuck off – facts.

If the image of the Arsenal Women’s team with the words ‘Arsenal Women Match Preview’ was too confusing for you, that’s your problem, Einstein. In the meantime, I’ve lots of magic beans to sell you, please enquire within.

Thank you for your continuous diligent work on the womens team Tim! It’s top quality that you provide and glad to see Pippa on board with the podcast. Hope many will go and watch the team in the Emirates. Greetings from Norway!