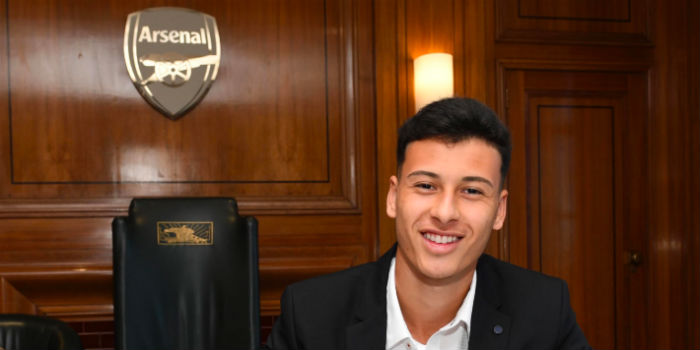 New signing Gabriel Martinelli says joining Arsenal is a dream come true and that he’s eager to capitalise on the opportunity.

The Gunners have snapped up the striker, who turned 18 last week, from Brazilian side Ituano and he’s expected to be given a run out in pre-season when the club tour the USA.

Whether he’s got enough about him to challenge for a first team spot is anyone’s guess at this point. We hope so, as it would save us from being publically pilloried for a failed pursuit of someone more high-profile.

Anyway, facing the Arsenal.com cameras on his first day at London Colney, the lad said all the right things in his softly spoken Portuguese.

“It is a dream since I was a child and also my family’s dream for me to be playing in Europe and playing for a big team like Arsenal,” he said. “I am going to take this opportunity.

“I am a player who gives his all at all times, I play as a team and always looking to win games and win trophies.

“I am very grateful for everything, I am grateful to God and I will try to make the most out of it.”

Asked to name the players he looks up to, he added: “I model my game on Cristiano Ronaldo, he is a player who works hard, pushing himself to the next level. Always in the run for titles and individual trophies.

“I look up to Cristiano Ronaldo, Messi and Neymar as they are players who can decide games and are very professional, who dedicate themselves to the whole game.”

Obviously, Ronaldo is a prick. But he is quite good. So if Martinelli can be less of a prick and also be brilliant, that would be fine by us. We’d accept that.

Also, notice how Raul didn’t make him sign his deal in the contract dungeon. It’s all plush wood and leather, perhaps as a reward for him dressing like an adult. Some of the first team could take note.

I only hope he is so selfish that he ends up with 50 goals and zero assists in each of his first two seasons for us and we sell him to Real Madrid for a billion. emmm.. .then on his way out of the club he leaves a window open and a magpie enters and wreaks havok on the Kroenke clan causing them all to spontaneously combust and lawyers find that the only living relative is me _ for some reason my siblings and cousins don’t qualify. I inherit arsenal and the la rams and walmart and the kroenke ranch.… Read more »

I hope he matches them for skill

Do you know who else you can say that about!? Do you?? Well let us know, umm, because I don’t.

Chris with a K
Reply to  HelderHughes

Correct me if I’m wrong but I’m fairly sure he was the one who rejected them.

So then surely there is something to say about his character.

To have those huge rejections on trial as youth player, but still have the mind frame to dust himself down, and go again.

Now he’s in the Premier League.

I saw on his IG some signs that points to a highly confident individual. I’m a student of human nature and I’ll wager this dude already has the right attitude and mindset at his age and should be very successful.

I worry We do need steel in midfield.

Is this the world we are now living in, where basing your game on Ronaldo, Messi and Neymar is considered a bad thing…?

Quite literally two of those three (not Neymar) are the best players to ever play the game.

If this kid turns out to be half as good as either of Ronaldo or Messi, then we would have an extremely talented player on our hands, with the potential to be our greatest ever.

Listen, I may be wildly optimistic about this kid but, at 18 years old, I’m hoping he can really come in and make an impact.

Rave reviews in Brasil last season, we have literally just signed a Brasillian Wonderkid! Can we not be enthusiastic about that?

Yes we can! I think anelka was about the same age when he had a major impact for us

There is an air of maturity about him. I expect him to make huge statement in the coming season.
In four seasons, we’ll be fighting a battle of our lives to keep him off the greedy claws of the Spanish giants.

Also the last player we made a profit on when we sold him I imagine….

Ross Hoon
Reply to  The Spoon

That made me laugh.

Shux
Reply to  The Spoon

FFS guys.
I’m hopeful as the next man but come on now, there’s literally no need to set expectations as such by even comparing him to Anelka.

Any idea he’s gonna do an Anelka is as near zero as you can get.

If he is the next Mbappe, sure yes, I am not not enthusiastic about that..

“Obviously, Ronaldo is a prick. But he is quite good. So if Martinelli can be less of a prick and also be brilliant, that would be fine by us. We’d accept that.”
I’d accept him being a prick and brilliant. My favourite Arsenal players are the ones other fans hate (Wilshere, Bergkamp etc)

This is the problem. They see an Mbappe at 19yrs and suddenly every player out of Brazil is ‘the new Mbappe’.

This is an academy signing with plenty of potential upside but nothing major for us in terms of first squad.

And certainly if this is partially why we are bringing Edu in for some nebulous role in a convoluted transfer set up, it makes very little sense.

I would be more excited if we had signed an Everton from Gremio.

if we signed Everton from Gremio. There is not a herd of Everton’s running around

He reminds me of Reyes, very explosive and nice near post heading technique. Very restricted game time in his position but could be effective as a sub with his speed.

He should get plenty of time as a wide forward. Unless our Reiss steps up as I’m hoping.

20 appearances 4 goals with Paulista for state of Sao Paulo season before.

He’s a kid
in 4th tier Serie D here in Brazil, the guys are usually old players, big players, players that beat the crap out of you

His neck looks normal, so clearly he’s not beyond redemption.

Only seen YouTube clips, but team play doesn’t seem his thing. But hopefully he will learn. Assume he has been bought to be in the squad, he’s better on the ball than Iwobi and has more drive than Ozil so that’s a good start!

I like the fact Ronaldo tops his list of idols and people he wants to emulate… Whatever we think of Ronaldo, he’s a beast. Constantly looking to improve himself with an insane work ethic. That’s something to admire

I’m hopeful of the kid, but seeing his stats and the fact both Barca and United had a look at him and declined, makes me believe that this kid wasn’t signed based on scouting or StatDNA or whatever.

Won’t he need a work permit …. or will he be on loan in Spain for the next five years (or whenever his contract runs out)?

Think he has an Italian Passport so all good.

Ronaldo: When you have money you cannot be soft, else you soon wont have any. Nice to fam + friends a prick to everyone else.