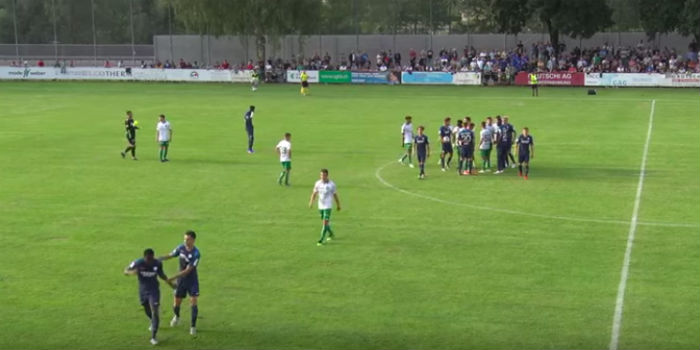 Jordi Osei-Tutu has been subjected to racist abuse in his fourth pre-season game for VfL Bochum as they lost 3-0 to Swiss side St Gallen in front of 1,572 spectators in St.Margrethen.

The Arsenal full-back, on loan to the Bundesliga 2 side for the season, was visibly distressed towards the tail-end of the first half as an off-the-ball incident played out. Even Bochum’s official match report isn’t particularly clear about what actually happened.

This video, a stream of the match from Bochum’s YouTube channel, shows Osei-Tutu’s reaction. He initially takes to the turf, then remonstrates with the referee and walks off the pitch both angry and upset. The match graphics say he’s sent off. The referee then talks to players from both sides and the coaching staff. Osei-Tutu reappears and then the half time whistle blows. 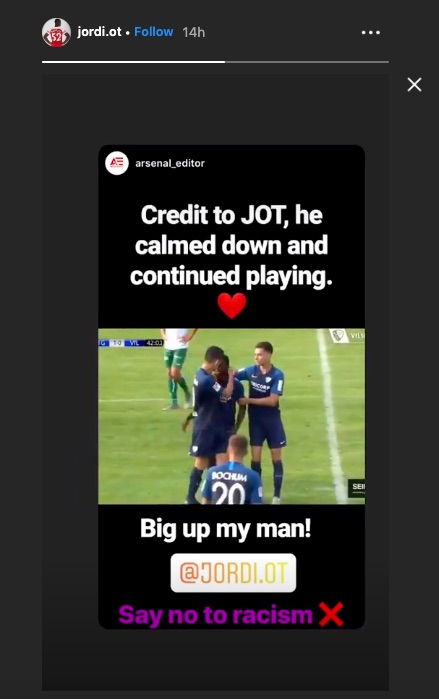 Osei-Tutu stayed on the pitch in the second half before being substituted just before the hour-mark. Since the incident, the 20-year-old has taken to social media to repost a message of support to which he added the message: “Say no to racism”.

That anyone should be subjected to such abuse in this day and age is, quite frankly, disgusting. In response, Bochum released the following statement: “VfL Bochum vehemently condemns all forms of racism. Jordi, we stand behind you!

“The incident in yesterday’s test game against St Gallen will be further processed with all participants. The club reserves the right to take further steps.”

Here’s hoping the perpetrator(s), whoever it was, is identified and punished.

Via the Bochum website, Osei-Tutu has spoken about the incident: “I am very disappointed that I was racially abused last night. Nobody should ever be discriminated against and it is really hard to understand how a fellow professional footballer can behave disrespectfully in this way. Arsenal and VfL Bochum have given me great support and I hope that we can finally demonstrate that racism has no place in football”.

‘That anyone should be subjected to such abuse in this day and age is, quite frankly, disgusting’.

Personally, it doesn’t surprise me that it happens “in this day and age”. Social media has bred a culture where idiots can easily make comments designed to tear other people down. The fact that it also happens in person is reprehensible… and unsurprising. We may be more “educated” as a society in 2019, but we should not be so arrogant as to assume we are more respectful than previous generations. This behaviour is disgusting, and more rampant in 2019 than ever before.

Spot on. The ‘this day and age’ kind of thinking is actually part of the problem, of any problem really. Forest for the trees and all that.

Lettra
Reply to  Kwame Ampadu Down

Who the fuck thumbed that down?

That asteroid can’t hit earth fast enough we are no longer evolving as a species .

Gooooooonnnnaaaaaaaa
Reply to  Kwame Ampadu Down

The strongest punishment should be taken against EVERY racist person. Jail them then ban them for life from attending any football match. That will send a message. But until the strongest action is taken against those cunts, they will continue getting away with it.

I’m absolutely disgusted and it makes me so mad that a teenager has to be subjected to this kind of abuse.

Whoever is siding with racists around here should GTFO. This is an Arsenal forum. Oneida-Tutu is an Arsenal player. This shouldn’t even be the issue. If you’re too much of a Neanderthal to be a decent human being, at absolute bare minimum we support our own. And if you’re somehow incapable of being decent enough to support others dealing with this at least shut the fuck up and keep your thumbs where they belong, up your ass.

Have you seen what some so called Arsenal fans comment on the official website when they put up the rainbow colours? Simply pathetic.

Don’t be racist, sexist, ageist….just be nice to everyone. It ain’t that hard….

I find it really saddening?

SG_Gooner
Reply to  Kwame Ampadu Down

racists should be pan fried , until they are black

Was this meant to be funny?

Jordi, well done for regaining composure and not letting an idiot ruin your experience. You shouldn’t have to experience that type of behaviour, but actually proud of how you responded initially to demonstrate how unacceptable it is, and then how you responded to show your professionalism as well.

The result might show otherwise but you won on this day.

He wasn’t composed at all the kid was in tears. He did the right thing but you can tell it hurt him.

There really needs to be a stronger stance on this issue other than the empty retoric and very repetetive programmatic language/response from fifa.

Both sides should’ve walked off. Meaningless friendly. Let the non- racist Swiss fans handle the idiot in the stands for ruining the match for them. A very hard line needs to be drawn in these situations. Enough is enough. If his loan club doesn’t push the issue to be handled to our satisfaction then we immediately recall him. We can’t control these idiots but we can control our players being subjected to it.

It didn’t come from the crowd. It came from a St. Gallen player. That makes it even worse.

I’ve just looked at the footage carefully and if you watch the minutes leading to Jordi walking off I think it looks like Slimen Kchouk, the St.Gallen no.28, has said or done something to Jordi. He is the player Jordi tackles that leads to the free kick from which Kchouk himself scores. You can see Kchouk staring at Jordi after the free kick is awarded and then the last time you see them before Jordi sits down on the pitch they are moving towards each other on the far side on the left of the picture. My suspicion would be… Read more »

To clarify, when I say Jordi snapped, I don’t mean violently, just emotionally. And understandably so.

From Jordi’s statement (“it is really hard to understand how a fellow professional footballer can behave disrespectfully in this way”) it seems clear that the abuse came from the pitch, not the crowd, which in some ways is even worse (though it’s stupid I am even trying to decide which form of racist abuse is worse than another). The good news is that it will be easy to confirm the abuser’s identity and take meaningful action against him.

Interesting it’s a player. Easy enough to identify then. It’s now on the club and the league to deal with this meaningfully. That player must answer for this. If they do not address this issue within the players themselves, there is no way it will be solved in the stands.

Not the kind of adversity you want your loanees to overcome, but it’s an experience that he’ll learn from and hopefully be stronger for.

If by punished you mean doused in petrol and set on fire, then i agree with you

Is this the type of experience loanees are being sent to experience? In preparation for when they return and have to deal with the Daily Mail?

I wonder who the person is that’s going around and thumbing down decent comments against racism?

For sure. Just interested in who it could be. I suspect it’s a regular poster around here who’s obviously too much of a coward to reveal him or herself.

I’m pretty sure Blogs can tell exactly who thumbed up and thumbed down every particular comment. Forums like this maintain that kind of information. Perhaps if it’s the same person on every post, Blogs would be kind enough to identify them so we all know who it is, right before punting them.

I can’t see who thumbs up and down, unfortunately. I might look into that though.

If someone could create a bot that finds racist people online, then thumbs them down every post on every website regardless of subject matter that would be fun.

A puppet lacking the intelligence to see past the ignorance of the messages they’re being spoon-fed.

Did he just stop or did Blogs took him out?

It is no longer enough for us to be disgusted or dismayed, disturbed, angered, disappointed and the like. We must all become active, not because it’s an Arsenal player, but because we are careening towards a permanent decline in discourse and activism and our outwardly reservedness is allowing the truly vile within each of our sphere’s of influence to be the loudest most shocking and most absurd. We all need to be ready for those who think and behave in this way to be more confident and more proactive and more outlandish in their actions and we need to band… Read more »

Thumbs down??? wtf, must be the racist cunts them selves, no reason to thumb down

We cant depend on footballing bodies like the clubs or leagues to stop this nonsense. We have to have a militantly antiracist culture among the supporters and throw these people out ourselves.

Yep, if you see something stand up for it and don’t allow it around you. These weasels are emboldened when they feel safe to hurl abuse. It has to be stamped out from within. If you don’t say anything you are part of the problem.

We love you little bro.
Don’t let these losers bring you down, turn it around so you get motivated to rise above.

Absolute cunts, a lifetime ban from the ground is not enough

It was a player. Just the one cunt.

This must be delt with to the fullest. No bla bla sweep it away bullshit..It’s clear it’s another player now fucking sort him out with proper punishment and then educate the dum tosser. If it happened in the work place you could face the sack.