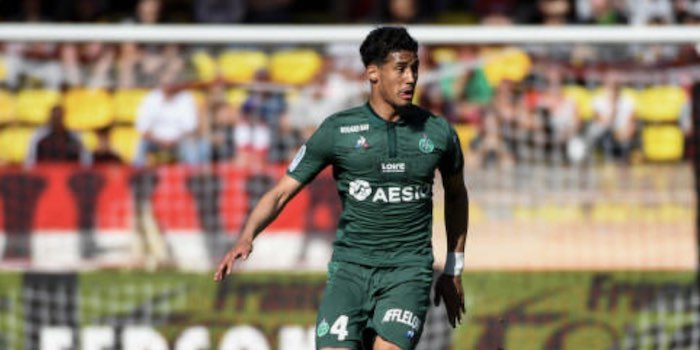 According to the Evening Standard, Arsenal are trying to structure a deal for William Saliba that involves us parting with as little cash as possible this summer.

It makes sense when you consider we’re willing – mostly because the selling party are insisting on it – to let the 18-year-old stay on loan at Saint Etienne next season.

What’s more, not paying a big upfront fee now means we can use our slim budget on other players.

Last week, chairman Bernard Caizzo made clear that Saliba, who is valued at around £25 million, would be part of his squad this year, one way or another.

“He will stay this season,” he told But! Football Club [translated by Sport Witness].

“That’s an imperative condition if we are to find an agreement for his transfer. We’ve clearly defined the conditions.

“It’s also William’s wish. He wants to wear the green shirt this season, to play in the Europa League, and he wants to get better before leaving.”

James Olley reports that Arsenal are increasingly optimistic about getting a deal for Saliba over the line and that Celtic’s Kieran Tierney is still of interest, despite the Gunners not following up on their initial rejected bid.

Whether we also look to sign a more experienced centre-half to help with our immediate needs remains to be seen. Argentine Walter Kannemann, currently playing in Brazil, is a possible candidate.

Arteta: We don’t have anybody to replace Tierney’s qualities

Gone from shopping for scallops at the Waitrose fish counter to screaming down Asda because they won’t accept our recently expired coupons.

We are well and truly in sausage territory.

It’s definitely time to wake up and smell the Mustafi.

The Spoon
Reply to  myrtle

My worry is where those sausages are being stuffed….

I think we’re on the nearly out of date shelf

Even more annoying is that we’ve walked into Asda with coupons, absolutely starving, and instead of focusing on some bread and butter (Tierney), been side-tracked into the Christmas ornaments section (Zaha).

This is truly evidence of how far Arsenal have fallen.
Kroenke is killing Arsenal and Arsenal fans are just sitting back and watch it happen – going out with not even a whimper…
Very sad days…

Yeah it’s reminding me of Mike Ashley at Newcastle, knows he’s fucking us over but doesn’t seen to give a fuck?

Kannemann is very like Papa and is left footed. both could complement each other really well. Only downfall he’s only 6ft

What have we become?? In other big clubs when a player is shit, they don’t play them anymore and try their best to sell and replace. With us, we keep playing the same shit player, over and over. Ebery season, when we know he won’t win us the games.

We should stop blaming Ozil, mustafi, or any other player that are shit and mess our team up. We should blame the owner, for being a cheap bastard who does not invest any money in our club. OUR biggest problem is Stan Kronkbastard SOB.

I agree we shouldn’t necessarily get on the players backs. We play them knowing full well they are below par. But when Ozil strolls around like it’s preseason, Mustafi gives away needless penalties, Xhaka throws limp legs at attakers, Kolasinac struggles to get 50% pass accuracy… you can forgive the fans for getting a little irate. These aren’t necessarily quality issues. They are the actions of thoughtless, lazy mentalities who are as bereft mentally as they are physically.

Two transfer records in one year, Xhaka and Mustafi for the same amounts as Mane and Salah, Ozil at lavish wages, exchanging Sanchez with a worse player and doubling his wages, handing Jenkinsson crazy money not based on his talents and returns but because he’s part of some core with a passport. Dishing out 3.5m to a club to help their player complete his rehab with us. Then running to our “sponsor ” who has no idea what we are doing and pleading with him to search his pockets and give us more money to play with because we had… Read more »

I heard Kannemann described as a card on legs the other night.

Didn’t ‘they’ used to say that about Xhaka?

If we’re gonna sign anyone from Grêmio it should be Everton.

I noticed him when he started playing instead of Richarlison and Neres. He has barely played senior football outside of Copa America 2019 though.

You are joking right?

“Tierney is still of interest, despite the Gunners not following up on their initial rejected bid.”

It’s project nothing at the moment seemingly

Which football club? And what about it?

I don’t see us bringing in a CB for this season. On the books we have Koscielny, Mustafi, Holding, Chambers, Mavropanos, and Bielik. More than likely Monreal and maybe Zech Medley will see time there. I think it makes sense to bring Saliba in next year when more than likely Kos and Mustafi will be gone and we’ll have a better idea of the abilities of the younger players.

Kos is a ledge but a starting CB pairing of an aged Kos and our Greek fire starter Sokratis (also past his best) is comfortably the worst CB pairing of the top 6, and they’re not getting better.

Gonna have to really hope Holding and Mavropanos step up big time in preseason then, cuz expecting this to get better isn’t not smart.

I’m hoping to see more of Beilik as a DM in a midfield-3 tbh.

To be fair it might be enough. Depends how good the young guys are.

Really we need another quality CB.

If we don’t have to play mustafi it’s already an upgrade.

None of our Cbacks would be first choice at top tier teams. Koscielny is past his sell by date. We should move him on granted we should be grateful for his commitment to us. Sokratis is OK. Even with Koscielny, the pair leaked 3 goals at Wolves and again in the Europa finals. Holding I have high hope for. He was looking to finally produce before injury so hopefully he comes in this season to make a difference. I don’t think Mustafi is as abject as some prefer to make him out to be but clearly he has fundamental flaws… Read more »

You’re right. No billionaire putting together a team to win would pick these players. But these are the players we’ve got. Hopefully they’ll be good enough, and if not we’ll reload slightly next year and try again. This is where we are as a club now. Project youth all over again.

Sounds like they are more desperate to sell. He isn’t what we should be looking for. May as well promote Bielik or Mavropanos. Fundamental difference between someone like De ligt playing convincingly through an entire season and Saliba with sporadic appearances. no thanks. and no to Kannerman either, doesn’t even start for country. We should be aiming higher (hopefully this is just spirited punditry churning out the same articles on the same lame duck players we constantly get linked to every summer) BUT you never know with Wenger gone. At least you felt he had our best interest at heart.… Read more »

3m quid is not a massive dividend I’m afraid. If he hadn’t taken it, and why wouldn’t he, wha5 difference would it have made? Can you buy Salah, or Mane or Van Diljk with it?
I don’t like the way the man runs the club but let’s keep it sensible.

Given the very poor financial position at Arsenal, do we really want to pay the kind of money (even in instalments) mentioned in the article for a young player with “potential”. Surely, given the terrible overall performance of the defence as a unit last season, a “hit the ground running” signing of an experienced, quality, central defender (to replace Mustafi primarily, assuming we can offload him somewhere – albeit at a big loss) is a much better use of very limited resources. Saying that, because of the state of the club on field at present I doubt the kind of… Read more »