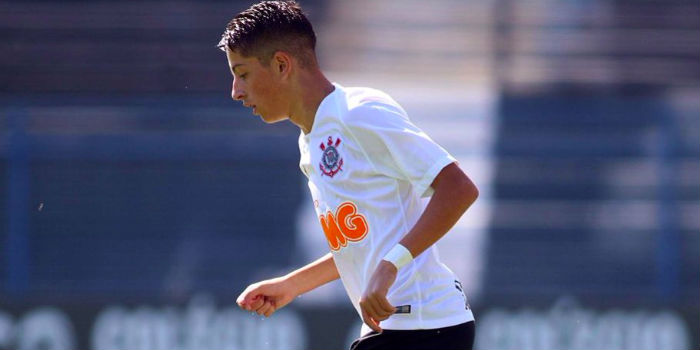 According to Meu Timão, who cover news of Brazilian side Corinthians, Luigi Gaspar, son of Edu, will leave the São Paulo outfit to join Arsenal’s Academy.

The 15-year-old, who has represented Corinthians since he was 8, signed a first contract with the club a year ago, but will now end the arrangement so he can join his father in London.

As he’s not yet signed professional terms there will be no fee involved. That said, apparently, FIFA rules state that Corinthians will be entitled to 1% of any future transfer.

In a message posted on Instagram, the youngster wrote: “Well, today I can say that it is one of the hardest days of my life and the hardest decision I have ever made…I don’t even know where to start writing this message but come on!

“Today I am here to inform you when I left S.C. Corinthians, where I was a club where I was raised as a person and as a man, where I spent most of my time in my life, totally dedicated to the club! It’s 8 years of my life wearing this cloak!

“So today, I come to inform everyone that this will be my last day as an athlete of this wonderful club, I wouldn’t say last because I’m sure I’ll always have the doors open here!”

We’ve no idea if Luigi is viewed as a serious prospect or not. We suspect it’s more a case of the Gaspar family unit being kept together. Which is fair enough, really. Good luck to him in London.

Slightly disappointed he doesn’t go by the name ‘Eduson’.

“The kids can call you Ed-Ju”

Is he a forward? Hope we sign someone named Mario and play a 4-4-2 of Mario and Luigi

Balotelli is a free agent isn’t he?

Nepotism runs through the club !!

Vinai’s son will soon be making deals with Hamleys as our official toy partner.

Or just a 15 year old boy following his dad and rest of the family to London. Pretty much the same as any family would if a parent was relocated abroad

What job will the wife get? All this makes sense. I work for a company in Canada where we recruit from Brazil. Usually the wife or husband finds a job in the company.
The only unacceptable would be like when Mourinho was a very bad player and his father was putting him ahead of others and the owner threatened to fire the dad.

Great genes – bring them in!

In a game where we’ve seen Thorgan, Kylian, and Ethan Hazard all follow Eden to Chelsea, Kaka’s no-name brother on the books at Milan, and the sons of Cruijff and Ferguson flattering to deceive, I don’t find it to be such a big offense.

My apologies. After double checking apparently Ethan Hazard never jumped to Chelsea. So that’s just the two brothers added as deal-sweeteners and not three.

Fancy making him wear a cloak for 8 years, must have been hard work!

A Different George
Reply to  Goonerrific

It made him invisible. (It made his father Invincible.)

Can he play centre back?

Based on our “form”, he’ll probably end up being loaned out in a few years and then sold for a tiny fee, or let go for nothing. Good luck to him (while he’s here).

Good luck to the lad, it’s quite a brave move. Imagine a kid from the UK having to take up a place at an academy in Brazil in similar circumstances . Apart from being the new boy, from another country, there could also be a degree of scrutiny and resentment and it could be quite intimidating.

He’s got to be in Arsenal. His dad had him in when he was at his mecurial best. 2004, the year of the Invincibles.

The stars are clearly in alignment … he cannot fail! Watch out EPL, hereeeee’s Luigi.

Interesting to see how he gets on and how long he’s at the club, he must be of a decent standard to be in the Corinthians youth team and even if he doesn’t make it with us I’m sure there are a host of London clubs who might be keen. Sensible move for the lad

Hopes he takes to wearing the Arsenal cloak.

But not the mask … that’s a real scary look.

Stinks of favouritism to be honest. Dont wanna be that guy but really?

So this is the kind of scouting for future generations we have him in for. He better get busy with the missus. Seriously I don’t think we have the best option we can find or should bring in for the club. Edu is a good chap that may look after our interest but lacks experience. Unless he can swing and Everton Soares, Martinelli is chump change. We really needed (had we any ambition) to bring in a Campos at Lille OSC (They are showing more ambition than us) Some of our moves this summer appear impressive but also run danger… Read more »

Can he play centre-back?