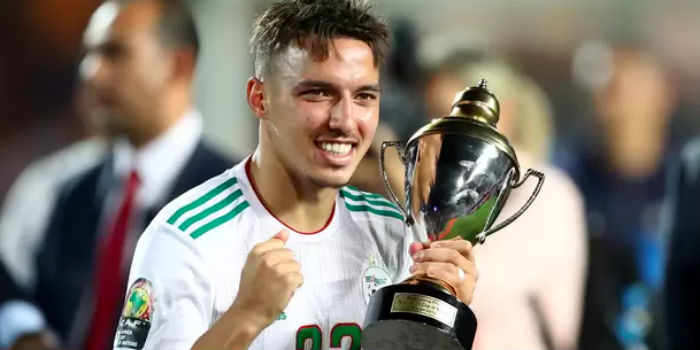 Arsenal’s coffers are set to be swelled by €4.8 million after AC Milan finally confirmed the signing of Ismael Bennacer from Empoli.

The Algeria international is believed to have moved to the San Siro in a deal worth €16 million and the Gunners will benefit thanks to a 30% sell-on clause.

The 21-year-old, who has signed a five-year deal, was recently voted the best player at the African Cup of Nations which his country won.

Arsene Wenger signed Bennacer from French side Arles in 2015 but he only played 71 minutes for the first team before he was sold in 2017.

Nice, more money for a CB (hopefully) and maybe Tierney

The Sun is reporting we may end our pursuit of Tierney as he now faces a further up to eight weeks out of action with pain in his groin and stomach. There’s speculation that we may return for Tierney in the January transfer window, however. A centre back is a top priority of course, but with only four days to go in the transfer window it’s going to be tight.

That make sense if we go for him in January, I guess we can make do with Nacho and Sead. And totally, we need a CB, been reading in a couple sites we might offer Cahill a one year deal, which honestly doesn’t sound half bad to me, guy has experience and isn’t a terrible footballer, and could give us that year till Saliba arrives.

That’d be sensible. Let him recover, get match fit, and then we can always come back for him if we want, and his price shouldn’t get too much higher either (of course, there’s always a risk someone else decides to buy him in January, but still).

A proper CB, either a short-term fix or a first team player for the long-term, should be our main priority now. We can’t start the season with only 3 fit CBs, one of them being Mustafi and another Chambers, who doesn’t seem to be Emery’s favourite player either.

The Sun is pure lies

You actually believe things written in the Sun?

Well done, Ismael. Had the best schooling at Arsenal only to excel and make the best of his career elsewhere. Clearly not a quitter!

Let’s hope making the best of his career doesn’t make us regret selling him. It wouldn’t be the first time we’ve let a youngster go without giving them any or enough of a chance to show (71 minutes playing time in two years) what they could do – only to watch as they’ve become a valuable asset for another club. At least we’ve got a little return this time around.

It’s me
Reply to  Goonereality

We deserve the 30% sell-on clause on Benacer but for Bielik, Charlton can take us to the court and get part of it. I vaguely remember such case between two other clubs few years ago.

Charlton can’t take us to court as he was never their player. The case you’re likely thinking of is one where a player is trained in a youth system before moving onto elsewhere & the youth club wanted a fee for developing the player.

Yoo may be right. Do you mean like the daycare team too wants part of the transfer money ? What did Emery and Freddie teach Bielik other than preventing him from pre-season tour to sell him? It is like someone who sat behind a computer and ordered 150 tons of cocoa from Ivory Coast to deliver in the US and earned 100 times more than the farmer. The guy behind the computer in London still spent his money and is the owner of the cocoa. Anyhow, I am happy with anything good for Arsenal but I just question anything that… Read more »

Yeah, you should just put that shovel down and stop digging.

Glad we got some money for him, don’t think we’ll ever regret letting him go.

A good example of why you should always insert these type of clauses when younger players who haven’t quite made it are sold. It all helps with the finances. Hopefully we can find buyers for Elneny & Jenkinson before September 2nd. Mustafi & Kos will only leave if we can get centre backs in I’d imagine. I wonder if the Coutinho interest is due to us having an agreement with a club to sell Miki if we get that deal over the line, otherwise it’s hard to see where he fits in this season. Pepe will be first choice on… Read more »

It is ridiculous that media have to create fake transfer news whenever there is a match between two teams, sad.

The media make up a story about us being after a player. The media then ask the relevant clubs if it’s true. The clubs give their answers and the media report those answers. Sad but true…

It’s all about the money. If Arsenal & Raul can put together a package & Barc really want rid of him then it will happen.

Hard to see who drops out of the first eleven if it does happen.

Yes, totally agree, although buying clubs don’t like such clauses for obvious reasons and it whether we can force one through depends on the level of interest in a player. Every little extra transfer income helps as you say, but the summer 2019 transfer window for Premier League clubs closes at 17:00 BST on 8 August so it depends who we’d be selling Elneny and Jenkinson to (if we can sell them that is – little real interest so far as far as I can see). We desperately need a quality centre back, but whether we get one on a… Read more »

There has been interest in Jenko from WBA & Palace, I think there’s a good chance he goes.

The European window closes on 2nd September so we have till then to offload Elneny.

Whatever happens with Mustafi we are going to have to take a financial hit, it just depends on what the club can get back for him, a loan with an obligation to buy seems likely.

I’d like a left back & centre back in before Thursday. If Tierney is still injured I’m sure we must have others on the list.

Signing Coutinho on loan would make the signing Ceballos on loan thing pretty redundant, wouldn’t it?

I think Coutinho plays predominantly on the left so I don’t think it affects Ceballos. He’s our Ramsey replacement but I think he’s comfortable in a three man midfield. I think you’ll see Ceballos start a lot of away games & the top six at home. You’d pick Ozil over him at home when defences will play deep against us.

Wenger bought and sold and probably ruined a lot of youngers careers, can’t really complain when the odd one makes it. In the cut throat business of the Premier league giving any of them minutes is difficult, and we’ve had some decent players do well in the reserves and on loan but never quite cut it in the first team. This is some cash in the bank though, let’s go get a CB and 3rd place this season.

LEFT08
Reply to  The Spoon

Arsene Wenger ruined the careers of many youngsters… said nobody, ever.

I see AC Milan have returned to their 1960s style of shirt, judging by the width of the stripe.

I have to watch the game on the FCB website which appears to be down at the moment. Why host the game on your website if it can’t handle the traffic?

This coutinho gossip makes no sense at all, and some fans think it’s going to happen. We’re well stocked in that department, get Tierney and a good centre half and it will be a great window