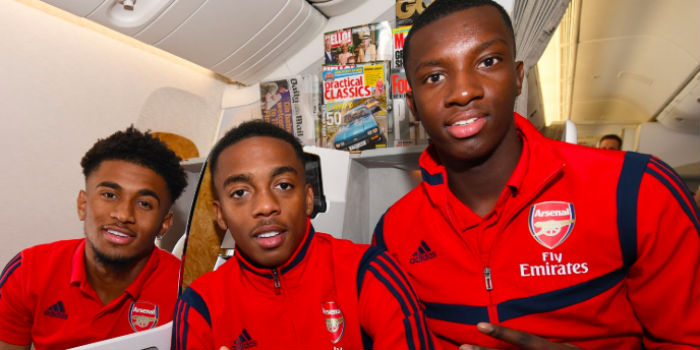 Joe Willock, Reiss Nelson and Eddie Nketiah have all been handed a call-up to the England under-21 squad for their upcoming games with Turkey and Kosovo.

After a disappointing summer that saw the Young Lions crash out of the European Championships in Italy and San Marino at the group stages, Aidy Boothroyd is hoping to get off to a winning start as they look to qualify for the 2021 edition of the tournament being hosted by Hungary and Slovenia.

While Nketiah, currently on loan at Leeds, and Nelson, who spent last year with Hoffenheim, have both played and scored at under-21 level, Willock will be hoping for his first taste of the action at this level. The midfielder has previously starred at under-20 level scoring four goals in seven games.

When Emile Smith Rowe is fully fit, he could be in contention for future squads. Given we have no representatives in Gareth Southgate’s senior squad, it’s these four youngsters that have the best chance of playing for England at the next World Cup in 2022.

That is some talent we have at U21

How has Boothroyd kept his job after the summer championships, the guy is clueless!
Great news for these boys to be in the England set up, future England players for sure.

It’s crazy, they were one of the favourites for the tournament and completely flopped. Not convinced by him at all.

So you don’t think Rob Holding might have a better chance of playing for England in 2022 than the youngsters?

Ainsley turned 21 yesterday, although I’m pretty sure overage players can still play for the under 21s.

“Given we have no representatives in Gareth Southgate’s senior squad”

From the “British core” to this in just a few years. Not a criticism, just find it interesting…

We really need to hire a new official magazine purchaser for the Arsenal jet. I nobly volunteer of course.

Well done boys! Go and do us proud – you are Arsenal’s future.

Holy smokes, that is a proper squad.

Pictured just before heading out on their paper rounds…

I really wish there was more info on how we decided to sign players. I remember us being linked with Tyrone Mings a lot when he was still with Ipswich. For some reason, we didn’t do it in spite of us being light at CB. By then, we had already spent 16m on Chambers who played backup RB at Southampton. I brought it up because Mings just got the England senior call.