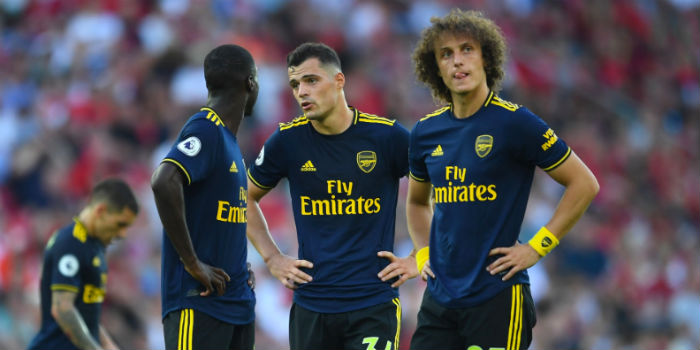 Granit Xhaka says it could be four years before Arsenal are able to compete at the same level as Liverpool but he’s confident a return to the Champions League is achievable this season.

The European champions made light work of beating the Gunners at Anfield on Saturday as a brace from Mohamed Salah helped Jurgen Klopp’s men to a deserved 3-1 victory.

While the Gunners put up a decent fight in the first half, the gap in quality between the two sides was clear for all to see.

Ahead of Sunday’s North London derby, Xhaka held up the Reds as an example of what can be achieved when a squad stays together.

“We know they have been working together for three or four years,” said the Swiss.

“We had new staff last year, we are improving our way and we need some time as well.

“With Liverpool, the first Premier League season with Klopp was not the best. You can see how they’ve improved and how it can work if you are together more than three or four years.

“They are a good example of where we can be in three or four years but we want to make a good season this year and be back in the top four.”

He added: “We lost the game [at Anfield]. You can lose a game [sometimes] and we are not the only team that have lost there. I don’t think it was a bad game for us.

“We were good defensively, very strong. The first goal killed us a little bit before half-time but it’s the past and we want to speak about the future. We have had a great week and we know how big the game on Sunday is.”

They bought and sold well, which I think has been key. I think we’re heading in the right direction, after seeing this summer being more willing to sell players, Iwobi for example.
But we may have to go even further than that. We may have to swallow selling Pepe for example, if his value takes off.

That’s like Liverpool selling Salah after his first season

I think Joey meant it like how Liverpool sold Coutinho. Not convinced that’s a good idea for us, mind.

True this. I see enough potential in this team, and the newbies yet to be introduced, to believe we could come good earlier than Klopps 4years period.

The big question though is whether or not Emery is a potential league winning coach.

Can we stop with the constant Liverpool comparisons? I don’t get it. Why be the next Liverpool? Let’s just be Arsenal. But be really good.

Yeah don’t want to be like Liverpool apart from in the playing better and losing fewer games part!

Get a fucking great coach, sell your players for humongous fees and buy awesome players for relatively cheap.

That’s not the Liverpool model. That’s the everyone but City model.

They dont play great football to be honest. they have powerful rugged players all over the park with good work rate but you dont see their midfield doing anything fantastic, or any patterns of play where you think wow that was a great team goal. They just have a methodical guns blazing approach and a front 3 that can hurt anyone. I would prefer our front 3 that can hurt anyone and the very stylish players we are bringing in in midfield. I feel if we had gone toe to toe with our full starting 11 aka having our first… Read more »

I partly agree. They have a very utilitarian, work-horse midfield (which might get more exciting with Ox and Keita) but it’s in support of a world class front 3 and probably the two best attacking fullbacks in Europe last season. I think at full strength we potentially have a good chance though, maybe.

True! They have a system that plays to their strengths, and that works for them.

But that’s just it- there’s a design there. 5-10 years ago the wild card was to have the 1 strong ‘midfield destroyer’. Klopp has gone and upped the ante on it by having 3.

Basically the 2 CBs plus 3 midfield defenders/ pressers puts a giant cork in the opposition’s creative areas of the pitch, while his 5 attackers – 3 forwards and two fullbacks- put the assault on the goal.

It’s certainly not the only way forward, but a method has to be found to break it down. Preferably one that doesn’t require Pep’s typical operating budget.

Yeah. I miss that silky one touch football which had me be a Gooner!

If we had a Diego Simeone, Anthonio Conte or even His Hiddink as coach, I would have been very sure of our next four years but with Emery, he reminds me of the tinker man Ranieri in his early days. The constant half time changes, the inability to get the best out of Ozil, the loss to Crystal palace and subsequent crumbling afterwards last season etc. I am not so sure but will hope for the best because I am a gooner.

I’m sick to death of Liverpool…you’d think no team had ever won the CL/Super cup/golden boot before! Sod them!! Can’t stand them….

Same. I really dislike them and their smug fan base. They make social media very unbearable. I am really mad at Messi and co. They could have saved the entire footballing world from all this arrogance.

Very smug indeed… i think they’re even worse than the Mancs in their heyday!!
Haha i agree about Messi & co… ?

Nobody was worse than the London mancs, I couldn’t stomach Chelsea in their prime, also. I’m sorry but no league titles in 30 years, doesnt give you the right to be smug imo.

Andthe budget Klopp has had since his arrival…? I don’t say UE is a better coach or the same kind of coach as Klopp (I think that Klopp is a better one) but Klopp has what seems to be an unlimited budget.

Honestly, what did Gazdis accomplish in his Arsenal tenure ?

In all honesty Klopp is only a better coach than Emery because he has now won the CL, up until that point he was widely held as a fraud lol. In all seriousness though, Unai may well not be the man to win us the PL or the CL but he is certainly the man to help lay the foundations for whoever follows him.

Sadly then you won’t be in the XI

With Holding, Hector and KT on the mend there’s much to look forward to. Genuinely excited for this season, which is an unusual feeling.

Nope! Henderson is an example for him to follow, that is more accurate.

Exact same thing going through my mind. I always try to draw the Henderson/Xhaka comparisons

Xhaka Charlie Adam is more appropriate. Henderson is better than Xhaka at pretty much everything except not being injured

Crumbs he doesn’t have much ambition, should be looking to get champions league this season getting better as the season goes on, then purchasing a couple of players that will take us to the next level and challenge!!!

I’m struggling to comprehend the criticism leveled at Xhaka from Tim Stillman and others with all due respect. 1) Granit’s good work in central midfield working the ball out and his deep pass created two of the BEST breakaway chances against Liverpool on a plate for BOTH Pepe and Auba (BOTH squandered) 2)The goal was put in by Torreira BUT the intercept was made by Granit high up late in the game. 3) He made 3 Blocks which is as much as Sokratis and Luiz. 4) He was not responsible for any of the goals. 5) Some people prefer to… Read more »

When most people who get paid to do what they do can see the problem, plus 90% of the fan base also seeing the problem and agreeing, from their own analysis, then chances are you may be wrong, you often can’t see the bigger picture and are focusing on the wrong stats. I think you may have OCD, from your repeated posts and inability to let things go. Stop focusing on a few stats and step back for the bigger picture, and you may see what the rest of us do, Xhaka slows things down, is too ponderous, and can… Read more »

We have our old Santori back!

The bigger question is whether Emery is the man going forward. I’m confident we’ll be back in the champions league next season. But, is he good enough to win the league and champions league in the following years.

Xhaka talk too much. Let your performance on the field of play do the talking.