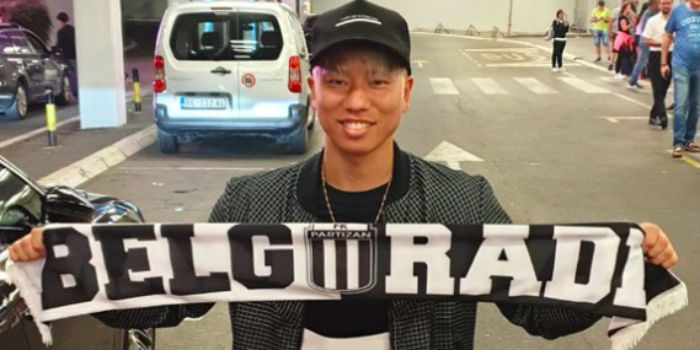 Partizan Belgrade have confirmed the signing of Japan international Takuma Asano on a three-year deal.

As we reported the other day, the Serbian side will a pay Arsenal £1 million for the attacker in three instalments.

To mark the occasion, they welcomed the 24-year-old with, erm, this image…

We have no words.

Asano, who never played made an appearance for the Gunners, was first linked with a move to the Serbian capital at the start of the month. He’s spent the last three years undertaking loan spells VfB Stuttgart and Hannover 96.

Good luck to Takuma in Belgrade. We’d suggest he takes the swords off before he takes to the pitch.

There’s a chance he plays against us in Europa League 😀

With Arsenal paying big money for some of the imported players,is there any guarantee our 2 top strikers wont be sold?

I’ll make a go at this even though I shouldn’t. Let’s set aside the messages coming out of our club that neither Laca nor Auba would be sold. Look at the current market and ask where would they go logically. Each would command €60-85m. Barca have 3 too many attackers as is, they have to dump salary to bring in anyone, old Suarez isn’t going anywhere and isn’t getting along with Griezmann and they are still trying to get Neymar. Real can’t buy anyone till they find a team dumb enough to pay for Bale, plus they want Pogba or… Read more »

I liked your comment. But for the sake of closure, you should cover PSG too, esp in case they lose Neymar and also if they don’t, but still go full PSG.

Bye man … all the best .
When are we getting our defender????
Im optimistic this season …. UCL spot

No Partisan officials in the pic with him? It looks like he bought a Partisan scarf around a parking lot and his cousin took the picture of him.
Good luck my friend! Hope Partisan will sell you for 25 millions as a late bloomer.

Hahaha I found where he bought the scarf from ???

Unless Takumo has some sort of affinity for samurai swords, the welcome is, well, fuck me.

Good luck to the young fella, we hardly knew ye.

I am going to miss him so so much.

What’s with the crappy photo in a car park?

I guess they just don’t have the vast river of cash to splash out on signing ceremonies that we do.

Indeed they have 20 mio.€ of debt officially, though the parking lot is strange

Good luck to the boy. Another young signing that never had a chance

Scored in his first game his first ? – excellent start

Good luck to him but what a farce this has been. Bought by Wenger, never kicked a ball for us, loaned out continually, then sold. Surely a prime example of what the new management team needs to get away from in the future! They talk the talk, but … .

If you mean that the new management needs to stop taking chances with young, inexpensive talents, then I would have to vehemently disagree with you, kind sir.

One of the issues with him was his initial ineligibility to play in England, which required more appearances for Japan. I am wondering if this problem will affect all non-British players, post-Brexit? As it stands now, a player like Saliba nor Bielik would not be allowed to play in England; I am not sure Ceballos would either.

Taking risk on younger players is nothing new. Wenger was doing it for many years. Martinelli is the latest (in frankly a string of ‘wonder’ kids’) that may or may not develop into promise but worth a punt. The transfer team is doing nothing different here. if Edu’s influence extends towards getting better prospects from South America that is one thing. Otherwise IMO we were better off getting Luis Campos at Lille but that may have meant shifting Raul. We don’t have that sort of ambition level. Wish Asano well. There is always too much expectations on these young signings… Read more »

Raul has just signed Pepe but you’re still whining about Luis Campos. Apart from a squad of 25 Mustafis is there anything in this world that would ever make you happy?

Good luck to him. He seemed to do well in Bundesliga 2 but struggled in the 1st tier. Glad we are selling these players like Asano and Ospina instead of kicking the can down the road with another loan. Good for us and good for them.

Hmm. With the atmosphere at Partizan I’m thinking he might want to keep the swords on.

Happy for him, he’s got the security of a three year deal and hopefully he can finally get his career on track.

Fuck me, thats a racist welcome

Well we were never going to match the offer of 3 katanas.

All the best and sort out your eyebrows

Aren’t samurais like an honorable thing? No harm in celebrating someone’s culture, I wouldn’t mind someone calling me a knight lol! I find the drawing amusing tbh. As far as the swords go… well it is a part of the history no point in trying to deny that. Tho football fans in does countries are crazy, he might need them ? Good luck young chap