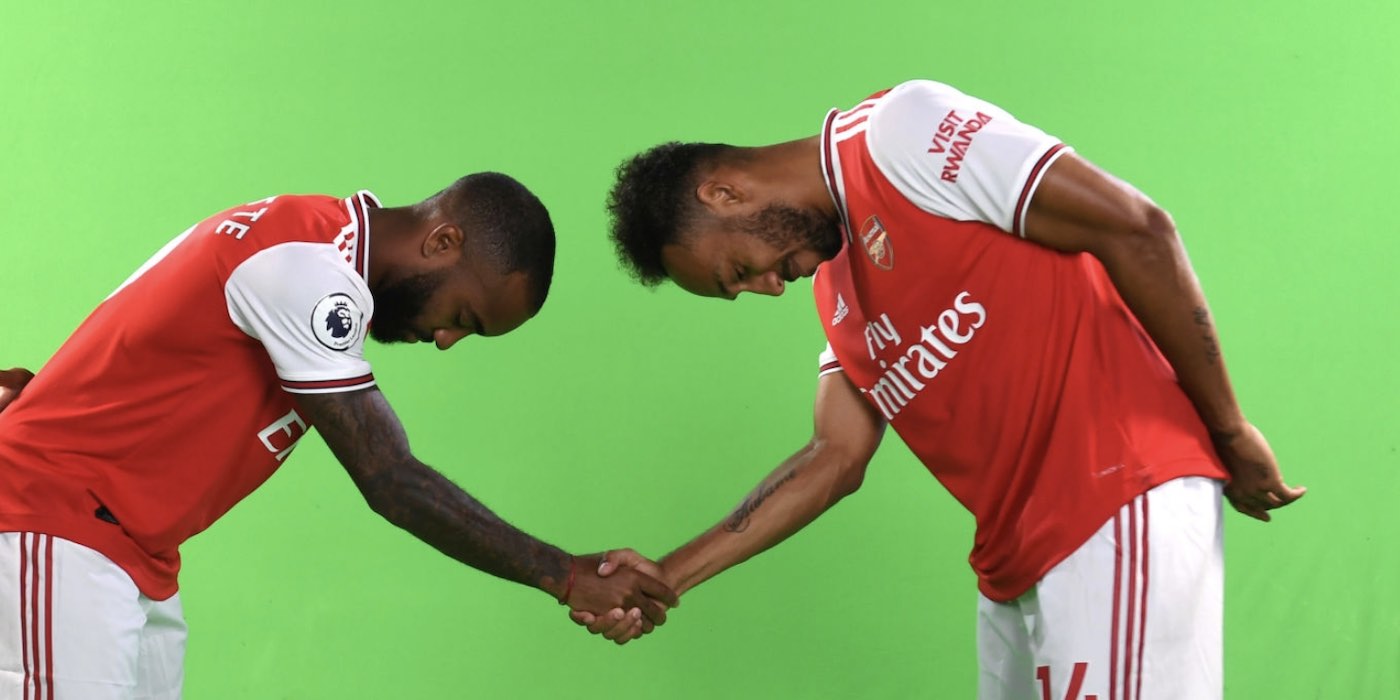 Unai Emery says it would be ‘perfect’ if Arsenal could agree new deals with Pierre-Emerick Aubameyang and Alexandre Lacazette.

Reports last week suggested that contracts had been agreed, but they were premature. However, the club are working on extending the stays of both players, who have become vital to the team and our hopes for the future.

Between the two of them they scored 50 goals last season, and hopefully they can do the same – if not better – this time around.

Quizzed about the talks, Emery said, “They are very important players and their contracts need to be in the same balance.

“I think if the club and they are speaking about that, it’s perfect. Edu is here for that reason. There’s also Raul and Huss, working with the players for that.

“It’s important for them, but my focus is on preparing the matches, each training session and making sure the players are focused and concentrated for us and on the work.”

The pair are expected to start tomorrow’s game against Burnley, with the French international recovered from an ankle knock.

Heres to 150 goals between them for the next 3 years at least!

LeProff
Reply to  Ya gooner

£150 million transfer price each for barca psg madrid to drool over it.

Really hoping these contracts get signed asap; but it should have been done back in May, June or July.
With the European transfer window not closing until I think September 2nd, I guess there is a chance that Barcelona, Real Madrid, or PSG could make a massive 100m+ panic offer for one of them. It may hinge on where Neymar ends up.

Yes, that’s a possibility. The trouble is that we don’t know what either player or, as importantly, their agents want. Lots of Gooners are automatically assuming that both players just want to sign extensions asap. We certainly all hope this is the case, and it may well be, but there’s no real evidence one way or another, is there? Also, contract negotiations are often much trickier than they used to be with all sorts of additional concerns – image rights and other commercial activities, buy-out clauses, add-ons of various types etc. These can draw out negotiations and could do so… Read more »

Also, hope to see OPAL – Pepe, Auba and Laca being set-up by Ozil, may not be tomorrow but hopefully soon and often this season.

To be frank, Auba and Laca have been around enough for Ozil to have set up already. Don’t see what Pepe’s arrival suddenly changes.

Do you mean Ozil’s contract needs to be put in the same balance?

We need to get Ozil’s contract off the wage bill asap – the £350,000 a week can be better spent elsewhere.

People just don’t get it, Özil needs players around him to shine, he didn’t have those kinds of players – now he has Pepe on the wing and Ceballos in midfield to combine with. Give him a break at least until he’s had a chance to play a few games with these players. Sure if he lets us done he should be gone, but since it’s very unlikely that we can sell him, let’s just try and support him and hope his strengths are amplified by our newcomers.

Glad to know Laca and Abu will not be joining Juventus in a few years for free.

Fuking hope no one from Arsenal is ever joining Juve for nothing ever again…well, maybe mustafi?

Not sure how Alladin would feel about that..

Getting this two to sign new deals that will keep them at the club will convince me that this is truly a pleasant dream. We sign one of the most promising wingers in Europe eventhough he was wanted by lots of top clubs who could offer him Champions League Football. As if that wasn’t pleasant enough, we go on to get the much needed players for all positions that needed strengthening Left back . Checked Center back for the future . Checked Experienced center back to help right away. Checked Central Midfielder to fill the gap left by Ramsey. Checked… Read more »

Not so fast… Lback yes. CBack for the future maybe. He is only judged over 19 games. Cback for current maybe. He works in certain systems. Age is plus and minus. Squillacci was also plenty of experience. CM temporary and jury still out. He certainly isn’t Santi mk2 and he is yet to sort his feet out. World class winger yes. BUT we could have also got equally good wingers in for less. OTOH installments and other intangibles (ambition) have to weigh in so overall a great signing. Trolley dash yes. Luiz is a band aid and panic buy. We… Read more »

Stop taking the sugar coated pill some like to sell…;)

Revel in it, for it is worth taking insulin for.

That is a customary thing Raul does.

Yes, that would certainly be a good idea. Such clauses are very common in Europe, Spain in particular where the amount is usually publicised widely, but still quite rare in this country.

Glad to see us being proactive. This new management are not just talking the talk, they’re walking the walk. Happy times, hope results stay positive. A paradigm shift from when a little Chilean brought forth his vile and a chairman running the club to the ground. I’d stop the headcount there.

Which is part reason I feel why we decided to go for a slightly higher price Pepe.

It will be hard to say no to a switch for Laca or Auba if we fail to reach the CL fourth place pot Wenger use to deliver and in which many fans so nonchalantly took for granted.

Just looking at the brilliant swissramble spread sheet on this summers spend and sales. 1) I think the (rumoured) 40-45m is the money earmarked (dry powder)without any sales of players. As it happened we did not have to touch it. 2) If you look at Sales, we sold 64m (not sure how Arseblog extrapolated to 74m in his piece). That’s 34m on Iwobi, 10m on Bielik, 5m on Koscielny, Ospnia 3m, Ameachi + Tompson + Asano + Bennacer and Adelaide. 3) Spend was 143m but if we take Pepe ammortised at say 14-15m over 5 years, 7m on Saliba for… Read more »

Aubameyang’s existing deal is set to keep him at The Emirates until 2021, while Lacazette is committed until the end of the following season. Let’s hope that they both sign extensions without too much delay as both players are very valuable (in every sense of the word) assets to Arsenal. However, in the worst case scenario, which is very unlikely but not impossible I guess, if one or both don’t sign for whatever reason the new management team have indicated players will be sold rather than allowed to run down contracts and leave for relatively little, or nothing. The club… Read more »

Good point about the efficiency of the new management team. In reality, they’re just doing their jobs in a business-like, professional, manner, which is what you’d expect really. However, what that says about the shambles of the previous management is best left to posterity!

As far as I know, Elneny is still is one of ours but there are several reports that Galatasaray are in talks to sign him on loan. Emery has made it clear that he doesn’t feature in his plans so any potential loan may be made permanent if it goes well.

This shows that the club is looking after their assets better now than before, leaving the business aspects of the game in one persons hand has cause us a lot in the past ( no more players leaving for free )

Am excited how Young the squad is looking now the future is bright with players like Gabriel, Saliba, Matteo, willock, Nketiah, AMN, Emile Smith Rowe, Saka, Nelson, Torriera with room to improve I can only dream.

Exciting times indeed. But it’s now down to the new management team and the players themselves to translate this promise and potential to consistent results on the pitch – particularly away from The Emirates. That may take a while yet though so we have to be patient.

Finally I can feel that the club is moving into the right direction, remember the time when we had to sell a certain left footed player to a certain Manchester team because his contract was running out, Or the time we gave a certain German player tons of money to save faces.!
Well! No more, now we move like Ninjas, soundless and fast. Like Raul said you either sign up or we sell you, No More holding the club ransom for More money. That’s a how a good leadership look like.

How do you keep top players like this pair? Creating and maintaining a positive environment for them is key, but not enough, they want to win games & titles, why the club also has to create and maintain a genuine strategy to reach there within their prime time. This is why our ambitious summer transfers was so important, they nitro boosted belief and faith in our ambitions and abilities to build a title challenging team

How do they do that hand shaking thing with three of them?

After RVP’s interview on BT saying he wasn’t even offered a new contract, this new management is miles better.