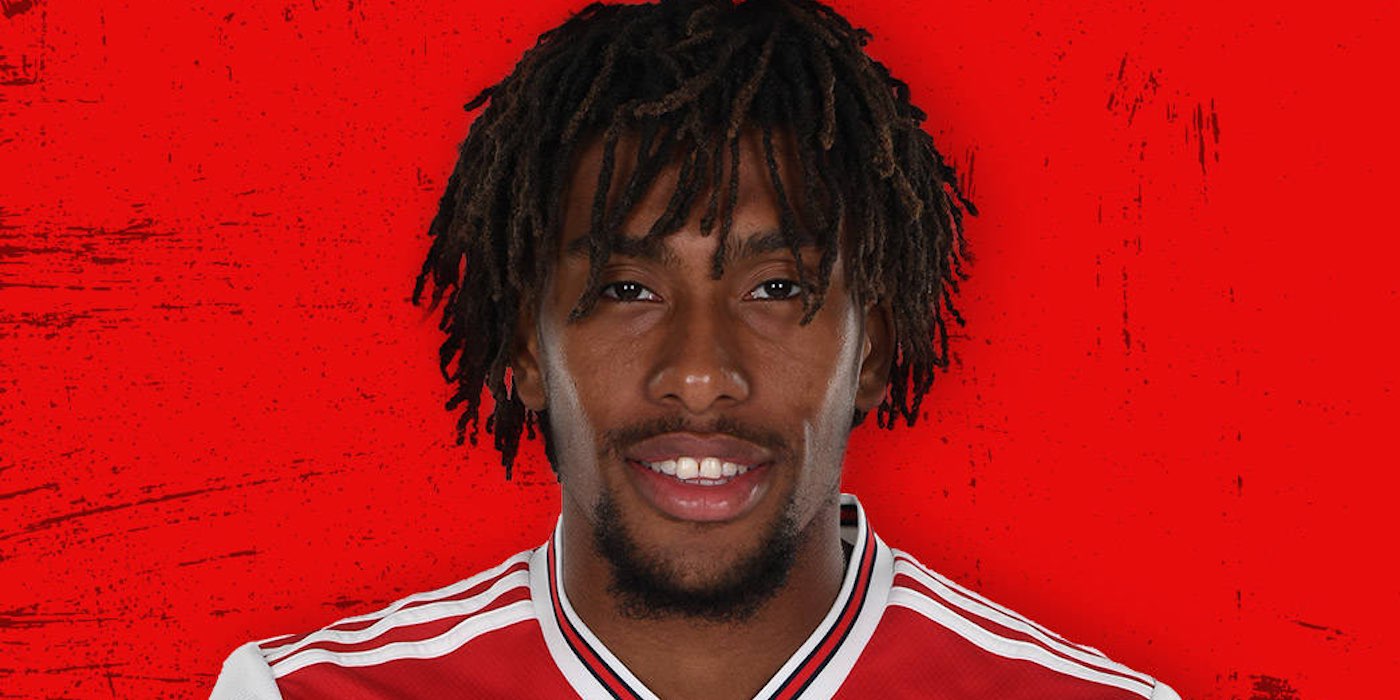 Alex Iwobi’s move to Everton was completed on deadline day, meaning his long association with Arsenal came to an end.

Having joined the club at the age of 9, he grew up a Gunner, and fulfilled his dream of playing for the club he supports.

This evening the Nigerian international sent a message of thanks to the club, staff and fans as he begins the next phase of his career on Merseyside.

Here’s what he had to say.

“I grew up dreaming of playing for Arsenal, following in the footsteps of some of my heroes.

“I’m proud to say that at 23 I’ve achieved one of my dreams. From playing for Arsenal kids to 149 senior appearances. It was an honour to play for the club I supported as a boy.

“I’ve enjoyed every minute of it. So many people to thank, far too many individual names to mention, but I thank you all.

“So many great moments from scoring my first goal at the Emirates, to scoring my last goal in Baku. You’ve all played a big part in my 17 fantastic years.

“Special thanks to the fans, my team mates, the support staff, my coaches Arsene Wenger and Unai Emery who put faith in me and gave me the opportunity to grow as a player and a man.

“BIG love to a special club. Arsenal will be forever in my heart.”

I think everyone here would wish him well at his new club. He’s a Gooner, and hopefully he can score a few against Sp*rs.

A real shame it didn’t work out :/
Good luck to him!

He’s 23 he could pull on the red and white again.

Is Alex not telling us something? The Kanu school of math.

Hope he has a good career and fulfills the undoubted potential he possesses.

Arsenal have played “a big part” in 17 years… Perhaps his football journey has been 17 years – as such – and Arsenal were 14 off them.
I suspect that’s what he means.

Good luck Iwobi .
Class act left without a fuss when he didn’t have to. Arsenal through and through ,way better than people understand and still a lot of growing and development to come I hope Evertonians show you more appreciation than some in our fanbase have .
Decent money but hope we have a good sell on clause as well.

Kwame Ampadu Down
Reply to  Lettra

Would have loved your comment if it ended at ‘through and through ‘ …why this endless need for do gooders to blame fellow Gooners ? It didn’t work out because Alex wasn’t quite good enough, there is no other reason. Wish him all the best.

Bartek
Reply to  Kwame Ampadu Down

Look at the comments section at Facebook after every Arsenal defeat. “Sell Iwobi”, “This club won’t get anywhere with players like Iwobi” etc. People were blaming him for Arsenal’s results, whereas in realit he has improved a lot, and there were games in which he was literally the only positive on the pitch in our team. I realise he’s been mediocre in terms of goals and assists, but the amount of shit people gave him was ridiculous, particularly given his improvement and young age. I’m not saying it’s bad business for Arsenal, it’s probably for the best for both our… Read more »

Well said…I’m tired of people justifying their own dislike of the player by trying to lay the blame at the door of people pointing out what haters they are….

Drew
Reply to  Kwame Ampadu Down

Yeah but he did get booed by some of our own supporters. Jesus I remember a time when we all sung Gus Ceaser’s name even though he was terrible. Nobody would revert have dreamed of booing anyone wearing our kit.

Brent
Reply to  Kwame Ampadu Down

Ummmm, he was good enough; it did work out. Clubs do not get £35M-£40M for academy products that didn’t work out.

Nah, just not quite good enough when it mattered over prolonged spells in the team…

Not being good enough is not the same as being crap, but perhaps some people are just too dim to understand that concept.

But last year he played more minutes than 85% of players (my own visual statistics). Unai plays a guy not good enough more than most players? He was just the player wanted by another club at the moment Arsenal needed incoming money. I think he doesn’t score enough goals for a forward but coaches always like to play him for a reason.

Yep Arsene and Unai played him in different positions but they both relied on him to do what he does better than almost any player in his age group – link midfield to attack.

We really need Arsenal to make this (and other upcoming sales) count. Gather our resources again and push for Dayot Upamecano. Follow the Atletico example of how they let an academy product go (Rodri to Man City) which let them make a big push to get Joao Felix.

Hmmm… I think he’s a great player, but for me, he’s just been missing that extra 10%, which would see him finish or make it past that last defender more regularly. He did cause a mess of defences though!
Perhaps he just needs a few more years to add that to his game. Who knows…

You can say what you want about Jenko and Iwobi, but both are true fucking gooners! Class. Best of luck for the future lads!

Good luck Alex, hope its all good for you.
Except against us, when you can feel free to have an absolute mare!

I resent Mesut Ozil and his big pay check for a miserable contribution. You’ll be missed mate.

Biggest L of the window for me. He had the Arsenal DNA and everything, and his overpaid competition had less of a claim to his position than he did. Was and am a big fan. That’s football though. And I guess that’s the new Arsenal regime. Ruthless operators, less room for sentimentality. Should be nothing to worry about as long as we don’t turn into Chelsea…

And all the best Alex. I should have said so explicitly!

I guess you want us to improve, and we need better players. Sad that he decided to leave, but he needs to play, probably a good deal for both parties ???

I’m gutted to see another one of us go, the new generation looks very promising though. All the best Alex

Will be nice to have an ex player who doesn’t get booed. Iwobi will always have a place here for the way he conducted himself. Good luck lad, stay away from our goal pls.

This one really hurts for me. Iwobi is not only an Arsenal man but so obviously a really nice lad as well. I hope he smashes it at Everton and I’m glad he’s joined another great club with solid history. The only silver lining to this would be the likelihood that Reiss Nelson is going to get some proper game time this year.

Good luck lad with the rest of your career. Tanx for the service and good fee

I hope we have a buy back clause!

A dignified farewell. Good luck to him.

It’s a pity Kos didn’t think about something similar instead of his shirt stunt.

Kos has no class. Anything else said is reputation laundering.

For real. 17 years Iwobi was at Arsenal and look at how he left compared to Koscielny. David Luiz too – yesterday Lampard said it was a lie that David Luiz went on strike, he was given permission to miss training to sort out the details of his move.

Even Koscielny’s ‘message to the fans’ was a load of rubbish. No wonder we melted down so often with that character as our captain

However, that’s a fucking outstanding deal for us!!

Once again, that’s how you say goodbye to the fans. Another example for that French shirt shifter to take on board.

Thank you Alex. I thought you should have had another season with us to see how it panned out but it wasn’t to be. All the best at Everton.

He needs consistent playing time centrally. Will likely get that at Everton to strike up a deadly and Young pairing with Keane up top.

I think he’ll go on to better things than even Everton tbh. But I understand why we did it; he needs playing time, the likes we couldnt give him, we needed to sell to recoup expenditure, and we need to give playing time to Nelson, Saka and Martinelli and centrally to Willock and Smith-Rowe.

All the best Alex for the next chapter. Good Manager and emerging team at Goodison with good loyal fans. Hope you get a regular spot to develop further and fulfill the talent. I think Arsenal will miss you but understand the squad needed improving elsewhere. An opportunity for Reiss now – hope he takes the opportunity and thrives.

The belter against Chelsea in May is what I’ll remember most about Iwobi, not so much the goal itself, but the way he always brought spark and energy in struggling Arsenal performances, despite his limitations. Never let his head drop, never stopped trying, always gave his all.

I understand why he’s gone but I’m still saddened. Good luck to him.

Good luck Iwobi.
Anyone hear from Kos yet…or was the shirt swapping video it?

I think that bridge was burned with intention so that’s it. Shame but never mind. We have new players to welcome to the club now.

wow where did all this dust come from

Everton have a potentially special player on their hands, I might be paying a bit more attention to Everton games now.

I hope we’ve put a buy back and sell on clause into the deal.