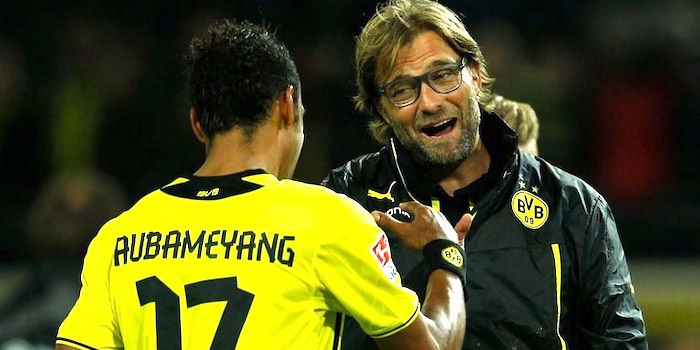 The two worked together succesfully at Borussia Dortmund, and while the German says he’s not really in contact with the striker anymore, he’s cognisant of the threat his former player poses.

Liverpool haven’t been completely convincing defensively so far this season, and that’s something Unai Emery will be trying to take advantage of when the two sides meet.

Speaking about Aubameyang, Klopp said, “Auba has no real weakness apart from his fashion sense!

“It is four years since I worked with him and we are not really in contact any more but he was my player so I follow his career. I like him as a person so I am happy that it has worked out really well.

“He was playing as a winger with Saint-Etienne when we signed him so that’s how we used him at first.

“Then we suddenly needed a No 9 because Lewandowski left us, and when we tried Auba we realised he is a really good central striker.

“It did not happen immediately, but over time he developed incredibly in the position and became a goal machine.”

The Mugsmashers boss sounded a little cautious of the potential threat of Arsenal on the break, because of the speed of Aubameyang and the new record signing Nicolas Pepe.

“So far when we have defended against him we have managed OK, but it’s never possible to do it 100% properly because of the speed he has,” he continued.

“He is a brilliant footballer and really good at being the connecting point too.

“Pepe is another one with proper speed who offers runs in behind, so that is something else we have to consider.”

Let’s hope we can take something from this game, a win would put us top but you wouldn’t argue with a draw.

I’m the most positive in ages going to anfield tomorrow but I fear this is just a step too soon for our boys. Fingers crossed it doesn’t get embarrassing like last year (and the year before). COYGs

Agree. However, with such massive changes in the squad, potentially a lot of the psychological damage of those games will have gone too.

Would be great to see our fearless youngsters and new signings really going for it, rather than the repeated conservatism that was embedded in the squad for years, which i’m sure was what made the players so damn fearful of everyone.

i agree, i also feel this and the spurs game will really show how luiz will effect our defence. I hope for lots of vocal organising from him.

Let’s win it mates, yes we can

Can’t say he doesn’t have a sense of humor. I imagine he would be a great manager to play for.

And he just seems such a nice guy. Hopefully the days of nasty managers like Fergusmoan and Moaninho are over with the rise of the likes of Klopp, Emery.

And then he had that one season at Dortmund…

Liverpool are going to hit us for four or five unfortunately. None of our new signings have significantly improved the defence, and “Lightweight” Lucas Torreira doesn’t cut the mustard as a defensive midfielder in the EPL. They targeted him last year and will do so again.

A Gorilla
Reply to  Ex-Priest Tobin

Who told you that Torreira was a defensive midfielder?

i really dont see either team winning by 4 or 5. likely be a 1 goal swing imo 1-1 2-1 somewhere along those lines

lol after two wins on the trot and the vibe around the place let’s not be happy with just a point? More like all 3. I think we will see a Emery masterclass tomorrow. You heard it here first

While I agree that we should go into the game with confidence, let’s remain realistic. We only narrowly beat Newcastle and Burnley (which are are not exactly the toughest matches on the calendar), the team is still getting used to new players and vice-versa, and we’re going away to Anfield to play against CL winners who beat us 5-1 last season and have won like 12 matches in a row now in PL. I’m cautiously optimistic but I would definitely take a point before the match and build on that. (my inner fan view is absolutely screaming over this rational… Read more »

Just warming up was all ?

We need to be protagonists!

Most analysts have opted for Pool to win. Of course they shd be favourites having lifted the cl trophy.However cast your mid back to 1989. Dalglish had just guided Pool to an FA cup triumph and was overewhelming favourite to lift the league title.GG George Graham said there was no reason why the gunners shd nt win by a 2 goal margin and by George they did it at the death. Back then Arsenal had a mean defence. I think 2019 attack is better but its the defence now that could be aproblem. Having said that ,Arsenal poor record against… Read more »

Now that we are playing Liverpool at Enfield we may stand a chance ?

I read Firmino is the dangerman. In fact all are. Hopefully Emery will devise a plan to choke this guy. I don’t believe any guy is unplayable by Wengers mantra when Arsenal got beaten by Messi. Against Saints ,Sane unleashed a goal .He was marked by 2 guys. I believed they did not stay close to him. I know easier said than done but that’s what happened to our strikers when they are closely shadowed. If possible get someone shadowing him from the back and kick the ball away. Then we shall see how potent these fellas are when closed… Read more »

Last season we were poor against the top six away from home cos our Transition was poor, we had no player who demands the ball and take on players, but with the addition of Pepe, I hope and am sure that our Transition will be much better than last season. Liverpool defense hasn’t looked great this season if we can be tight and composed at the back and get our Transitions right we can cause them lot of troubles. Emery has to target Arnold he looks the weakest link in the Liverpool defense for me this season so far.

I hope we see lots of shots from us this game. Adrian is no slouch, but we’d do well to test him, and test him frequently. Ceballos does not seem shy about letting rip. Neither does Pepe or Willock (if he plays). I have a funny feeling Xhaka will score a screamer and then do that great celebration where you can tell he’s thinking “THIS IS FOR MY HATERZ!!!1!”

My money’s on an Auba hat-trick now.

Tell you what, he is a great manager, but Jurgen Kloop is a total piece.

Emery’s tactics flourish against the top 6 sides. Last season we were the better side away against man u, spurs and Chelsea; we were not outsmarted tactically.
With better personnel( no mustafi, improved AMN, Ceballos, Pepe and more options from the bench) and better understanding of emery’s philosophy, we are within the striking distance to Liverpool.

Arsenal has played two teams that will end up in the lower part of the league. Now it’s time for truth.

Yes, basically you’re right. The records of Newcastle and Burnley against us is about the same as ours is against Liverpool – pretty awful! Inevitably, there’s been a lot of talk about our new look team and what they’re going to do. This is fuelled by expectations over the Summer transfers, which is understandable of course. But later on today all that talk about what we’re going to do becomes irrelevant, actually doing it on the pitch – against a top-rated, in-form, team – is all that matters. As it’s very early days, I think we’ll be doing well to… Read more »

Was hoping that the last sentence was Klopp’s quote as well ?

Hopefully klopp wont be watching much of the match cos he’s constantly going back to the dresing room to chane his soiled pants each time PAL runs at them in full speed. Same goes for us, but we’rd slihhtly better cos we dont play mustafi mo more

Klopp is an experienced manager who who knows what to say, and when to say it. His remarks about our possible attacking threats are a reminder aimed at his own players. Liverpool, if not the finished article (is any team?), are formidable and going for their 12th straight EPL win today. In contrast, we’re very much work in progress but despite that we’ll have to play far better than in the opening two games because we’re up against superior opposition. I’ve a feeling we’ll either share the points, or lose by the odd goal, but who knows? I hope we… Read more »

Liverpool can equal their 29-year-old club record with a 12th league win in a row on a ground where they haven’t been beaten in the top flight for two years and 123 days.

Arsenal have gone 22 away games against top six without a single win.

We face a big challenge today, no doubt about that. I’m not sure if we’re quite ready for it at this stage, but we’ll see.

If the team gives everything but still loses, then that’s not a disaster. If it’s a collapse like last season (which I think is probably unlikely) then that will be a massive blow to morale.

Law of averages. Gotta change at some point.

If we lose, even heavily, can all fans please remain calm and put the game into perspective and remember that Pepe and Ceballos and Luiz are still learning the Arsenal way and that we’re playing the champions of Europe. I’m quietly optimistic but it wouldn’t shock me if we go down by 3 goals. My biggest worry is AMN and Monreal against Mane and Salah, but should be an entertaining game nevertheless. Interestingly, at least half the outfield team that started last season’s game won’t start today – Ramsey, Iwobi, Mustafi, Leitchsteiner, Kolasinac, maybe Xhaka and Torreira too. On a… Read more »

It already feels like a major match in our season.

Don’t be fooled. Being a good manager, he’s saying that for the benefit of his players – I’m sure he says something “positive” about all opponents. It seems to work for him though as Liverpool have won eleven consecutive EPL games on the trot.

I would like to see us start with a back four preferably with the same midfield as against Burnley. We could then switch to a back 3 if things go bad.

Do you see yourself starting in a back 4?

I (not Sead himself unfortunately) would go with Nacho, Sead has to show better performance in that left back position first :d.

I’d rather Pepe and Torreira in for Nelson and Willock.