Arsenal have confirmed that Mohamed Elneny has joined Besiktas on loan for the duration of the 2019-20 season.

Signed from FC Basel in January 2016, the Egyptian international has been a safe, if unexciting option for us in midfield, but with Lucas Torreira, Matteo Guendouzi, Granit Xhaka, Dani Ceballos and Joe Willock all ahead of him in the pecking order right now, his chances of regular football were slim.

Various reports suggest there’s an option clause in the loan deal which could see the Istanbul side make the deal permanent for €18m.

We wish him the best of luck in the Turkish Süper Lig, and if nothing else, let’s never forget his epic Tweet burn of Alexis back in 2017 – just after Chile had failed to qualify for Russia 2018. 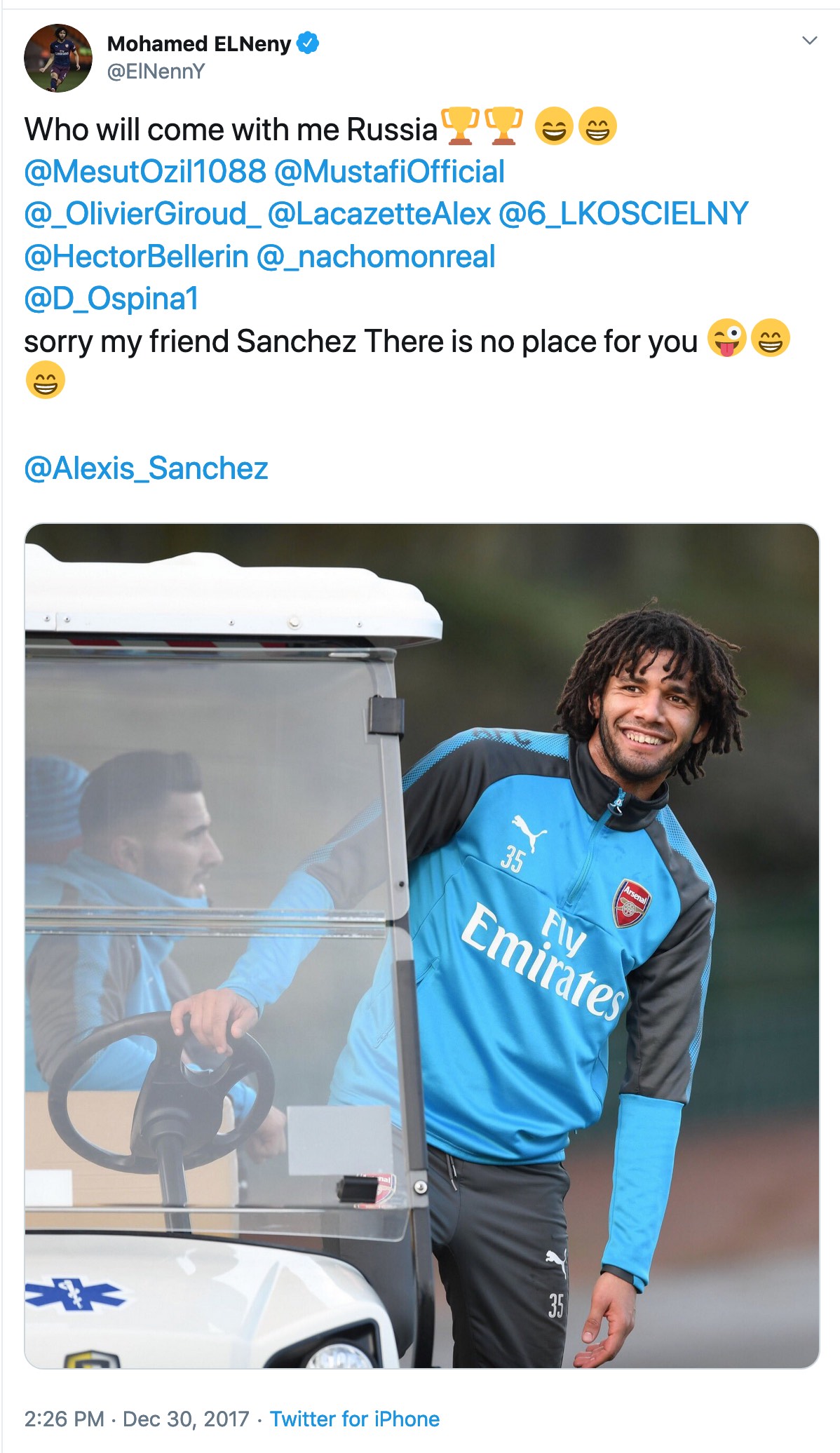 “He has something” – Arteta hails White’s...

White: There’s so much fight in this...

Play well Mohamed, we can do with the 18m transfer fee!

pretty sure that would smash the turkish transfer record. Would be nice but I seriously doubt that Besiktas are able to afford that.

Solid player but it didn’t quite work out for him under Emery. I thought at the beginning of the summer he would get snapped up by a mid-lower Premier League side e.g Newcastle/Villa. He always tried his best, so good luck to him. Now we just need to get rid of a certain befuddled looking German CB and it will have been an exceptionally proactive and productive window

For definite. Emery has burned his bridges with Mustafi in recent press conferences, so it would be quite awkward if we can’t move him on!

If we do manage to trim the squad like this, combined with the players coming in, then this will have been a fantastic transfer window on all fronts.

You’ve got to see him play for Egypt to realize the quality he has. Lot of things go through him for them. He didn’t get a decent chance at Arsenal but that is football. He was supposed to fight for his position when Guendouzi came but he never does that.

I really liked Mo’s attitude. He seemed to get what it was to be a Gooner from day 1. Shame it didn’t work for him because I reckon with a bit more of an adventurous attitude there’s a good player in there.

Less adventurous attitude doesn’t make him any less a player. Not all players are built the same way. Some make the midfield tick just by giving simple passes and being available as an outlet for passes with the occasional tackles, interceptions and blocks. It’s not glamorous and they’re often maligned by clueless fans. He fits into that box and he does it pretty well. Personally, I feel like we could have made use of him sometimes last season instead of the more adventurous, but often tactically indisciplined Guendouzi. It’s just unfortunate that his style doesn’t fit into the new manager’s… Read more »

I agree. An underrated player. Uses both feet and passes quickly and efficiently with either foot. In my view he rarely gives the ball away. As the previous contribution says he keeps things ticking over and should be in the team much more frequently. The fact that he is not showy or glamourous and not a risk taker should be valued not criticised or undervalued.

Great goal against Barcelona! Probably his best moment with us.

Thank you Mohamed Elneny for your contribution to the Arsenal (so far). Best wishes for the 2019/20 season.

Don’t forget that goal in the Camp Nou. All the best Mohamed.

Sorry BroMo.. Perhaps the competition is too high for your position at Arsenal. But at Besiktas you will probably start most of the games hence the reason they brought you in.. Do a Guendouzi or Torreira over there and sure you will excel. All the best.. Always a Gunner..

Hard not to remember your epic troll to SancheZ because people will keep reposting..

We should have loaned Iwobi, he was handmade here. What is the sense in selling Iwobi and loaning Elnemy?

SarcasmB0t
Reply to  Jack but

One was in demand and a significant transfer fee was offered for him – the other is Elneny.

As prolific as John Jensen. Will not really miss his goals. Or his assists. Or his dynamic passing. Or his goal-saving blocks. Apart from that…

Good to show that the club are getting the business done. If Wenger was still here he’d probably be awarding Elneny a new contract at 200k a week.

We just need to get rid of Ozil and Mkhitaryan now.

I will settle for getting rid of you.

Paul Roberts
Reply to  A P

Unless I’m mistaken, the comment was made by the man; that means that the two are intrinsically linked.

Bulky
Reply to  A P

He’s got a contract until 2022, the worry is it won’t take long for Besiktas to discover he’s average at best.

And if he doesn’t shine in some tinpot Turkish league? It’ll hardly attract him to any other potential suitors.

€18 million is a lot Mo money than I was expecting, that would be a great piece of business; money towards Ceballos’s permanent transfer.

I see what you did there mate! 🙂

If Elneny does well, they will take him permanently.. Good for everyone..

Glad to see we have managed to strengthen our player valuations. Maybe just an option to buy, but 18 mill is a good chunk of money, and worth it – he might not be a starter for us, but an experienced international and can certainly do a good job in most teams.

A very tidy player but couldn’t do enough offensively or defensively to justify a starting berth with us. Hopefully he can show his quality for Besiktas. Good luck to the lad.

So we have had a huge purge of players we don’t want or need anymore this window. Just about everyone except Mustafi has gone. I guess he’s here for one more season and can be used in Carabao, EL and FA Cup games.

Somewhere between 5 and 7.4 million pound according to Wikipedia. Not a bad return if we get it.

Average player. Good attitude. works hard, just not what we need bc we need to add capabilities not numbers. Has absolutely no function in the squad last season. This is a good move for him. What we need is to make Cebellos permanent or find someone next summer with good capability to a) retain the ball at feet under pressure so we can work it up field in congestion just behind the half way line in midfield b) someone with ability to link and push forward from the half way line, dribble at players. MEANWHILE: Some prefer to imagine ill… Read more »

How much turkish clubs pay for transfer fees on avg? That sounds like a lot when when we couldn’t find any stories over the last seasons that was even close to that valuation. I think this option probably will be declined lol maybe it was to raise the loan fee?

All the best, Mo. I think this will be good to keep his place in the national team too. Seems like a lovely bloke.

He’s been value for his fee, obviously didn’t need the bumper pay deal like so many others under the weird socialist wage structure experiment. Useful, if limited player.