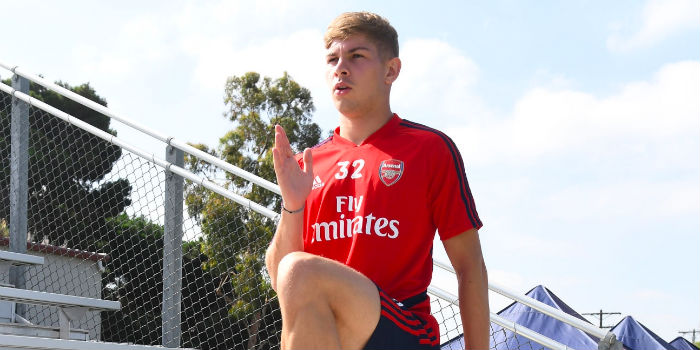 Emile Smith Rowe has frequently been compared to Jack Wilshere when progressing through the ranks at Arsenal, but there are fears that the similarities between the pair could stretch even further.

As has been well documented, injuries frequently stopped Wilshere in his tracks, and there are concerns that Smith Rowe could follow a similar path, with the midfielder having suffered another setback while playing for the U23s against Derby County last night.

Smith Rowe had been working his way back to full fitness by featuring prominently for the second-string in recent weeks, but he had to be substituted at Pride Park, with Miguel Azeez replacing him.

Last season, after enjoying an excellent first half of the campaign at Arsenal, Smith Rowe saw his loan spell at RB Leipzig heavily affected by an injury.

In the previous campaign he also had a spell on the sidelines, and it is hoped that his latest setback won’t keep him out for too long.

When Smith Rowe is fully fit he is perhaps Arsenal’s best young player given his superb close control, excellent passing and ability to burst forwards with regularity.

If he can manage to overcome his injury issues then Smith Rowe has a very good chance of becoming a star player for Arsenal in the future, but the amount of time that he has spent on the sidelines already in his career is certainly concerning.

There is no news yet on the severity of Smith Rowe’s latest injury, and if he isn’t out for too long then the 19-year-old could still enjoy a productive first half of the season with Arsenal, featuring in the cup competitions before perhaps heading out on loan again thereafter.

Man alive I hope it’s not serious. He is our most talented youth academy and effectively Hale End’s Ceballos.

Don’t want him to suffer from the out-of-sight, out-of-mind syndrome that our other youth talents who suffered from injuries have.

When I’d expressed– the ‘new’ Ramsey?
Was hoping not in all ways. *sigh*

Hope he can get back, lots of talent, great prospect.

He’ll be ok and come back stronger..

That’s a shame. When he is fit and firing he looks like such a “natural,” making everything look easy. I really hope he can conquer the injuries and continue his star trajectory.

Darn it. As the article says, he is arguably the brightest young talent in Arsenal’s squad – really hope he can get over all these injuries

Willock is impressive. He was under the radar but really grasped at his opportunities.

Love the way he tries to work the ball up field through feet.

Still rough edges but we are talking about a young player.

Ditto Smith-Rowe and indeed even Guendouzi.

Many like to get on his back and prattle on about ‘nautral position’.

He will make some mistakes bc frankly he is still a very young player but his natural ability and pace, he can develop into a formidable RBACK.

Shout to Nelson too. Want to see him involved this weekend.

Really hope to see him come back in.

I suppose maybe a reason why we are holding on to Mhkitaryan for now.

Hope the medical team can figure out what Smith-Rowe can do to fix this. No one deserves to have a curtailed career like Wilshere’s.