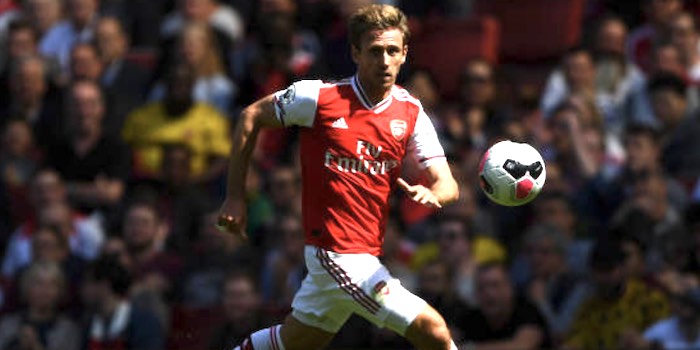 According to El Mundo Deportivo, Nacho Monreal has signed for Real Sociedad, and as such will not be available for tomorrow’s North London derby.

They report that the full-back will attend the game, and will have a chance to say goodbye to fans afterwards, but Arsenal have accepted that playing him might put the transfer at risk should he pick up an injury and thus won’t consider him for selection.

The fee has been called ‘symbolic’, with the Spanish club set to pay €250,000 in instalments with some of it dependent on ‘sporting results’.

If this is accurate, it means that Unai Emery will have to pick Sead Kolasinac, and it might mean a change in formation as the head coach has often been reluctant to use the Bosnian in a back four.

Of course there is the possibility that Nacho could still play, but we’ll find out tomorrow I guess.

Good luck to you, Nacho. Sucks that he’s leaving when we need his services so much in this game though.

Poch must be rubbing his hands in glee if Nacho not playing is confirmed.

I dunno, I think there’s something to be said for Kola’s physical side in this match. I know he might be a bit leaky, but I was right next to the scuffle last year when that twat Deli Ali got into it with Rambo on the sideline. This year I expect Kola to go wading in in full bodyguard mode. Particularly if Ozil plays.

Kola played quite well in that game tbf, was a solid 8.. Love the way he put Winks in his place too.. Kola is not as bad as bad as people make him out to be. He always seems to pass forward or try 1-2s, which might just be the instructions. It’s high risk but it also makes him the menace he is. His offesnsive contribution is better than all our full-backs. Don’t think Hector and Ainsley are far superior defenders either.

Thought we should have tried to keep him until January. Love the guy.

A brilliant player for us over the years. Wish him the best of luck, always gave 100% effort and also provided moments of quality.

Total agreement he is a class act ,hope he gets a nice sending of by those attending the game tommorow.
Sociedad are getting a great player / guy.

Oh come on! They should have let him play the NLD. I bet he would have scored too.

Eh? £250k? No wonder Kosbwas seething when he tried to do one.

My thoughts exactly. How is Kosc worth 5 mio and Nacho 250.000, when he’s even younger and hasn’t had such injury problems in the past?

Perhaps a message to players that if they leave in the right way and don’t try to leg the club over they’ll be treated well.

I think Kosc has been professional too until the moment they denied him what they have now allowed Nacho. Very strange.

Dr Oo no
Reply to  Clockendrider

It’s the club that’s bought him that’s been treated well. Seems odd to me. Arsenal should be looking out for Arsenal

There were stories about getting first option on a young player for the future, I think there’s probably more to it than just the small fee. Also Nacho has been massive for us and very professional always. I will miss him, he’a one of the good guys.

Dropping points against Spurs cost us 10s of millions worth of CL money last season. Surely playing him is worth the risk. Still a bit of a weird one for me.

Dropping points against Palace and other low end clubs cost us more. 1 more win against those types would have made the argument redundant.

Well, with THAT penalty we would have gained two more points and that lot would have had one less = fourth place to Arsenal

We could have laughed about losing to Palace and still being ahead of them but in the end we did it the Arsenal way: shooting ourselves in the foot …

Anyway, there seems to be more to the deal than just this tiny sum. This probably is what Raul is meaning about ´outsmarting the market´

You realize we got the three points in the home game?

Why are we doing this for that kind of fee? Just to be nice to Nacho?

Seems unnecessary and unwise. It’s piling a lot of pressure on Tierney to start performing week in week out straight after returning from injury, especially since Sead can’t plate in a four. And we’ll miss his CB cover, especially if we’re selling Mustafi-

Dr Oo no
Reply to  EZD

No idea why you’re getting down voted I think you’re spot on.

I reckon you’re underestimating Raul. If he’s let him go for 250k it’s not out of sentimentality that much should be clear. I’d be surprised if we don’t do some Sociedad business next summer.

3/5 at the back was on the cards ever since we signed Luiz. Might as well lean in to it.

I hope this isn’t true I hate 3 at the back.

Of course we’ll play 352 with a 5-man diamond in the middle.

As long as we win big against Spurs I don’t care who plays?

If Emery wins? he’ll get a simple nod of the head from Arsenal fans….
If he-loses? Arsenal fans will go into complete meltdown, demand that he lose his job, and have a competition with each other about who can have the girliest temper tantrum

To be fair, that’s called expectation and goes with managing a big club – I’m sure he’ll be fine with that.

Wouldn’t that be a pentagram?

Don’t worry about it, there’s nothing prohibiting the use of black magic in the laws of the game.

So it’s 3 at the back now until Hector and Tierney are back to full power.

I met Nacho earlier this year with work, he was funny, Interesting, positive and seemed very well liked amongst the squad. A great person as well as a underrated player. Let’s not forget we had André Santos playing there at one point. He was a great person to talk to and will be missed. I wish him all the best for the future Mucho Gracias Nacho, La Cabra.

For me the transfer deadline should be the same throughout the UEFA nations – by closing it three weeks before the rest of europe this places english teams at a great disadvantage.
Best of luck to Monreal though – he has been a great servant to Arsenal and it is only fitting he should finish his career in his homeland…

George
Reply to  Me2

Agreed. I have to say, the FA is really quite a pathetic group compared to most of Europe.

Anyway, Nacho’s been a great asset to our club and I wish him all the best.

I’ve heard the fee is so low because Real Sociedad have agreed to give us first pick of their players in the future.
Monreal will be a big loss, certainly until Tierney’s ready.

I reckon he will play ?

You feel happy & relieved that Montreal is leaving?

I don’t understand this urban myth that Kola can’t play in a 4.
He was voted best LB in Germany in a 4, played in a 4 plenty under Wenger too.

Questions about his defensive ability are there, and certainly his ability to pass, but it’s not a forgone conclusion he won’t play in a 4 either.

Personally this deal is only strange because we sold Dominic Thompson, a deal we didn’t really need to do. Now we don’t even have a real reserved LB option either.

Dom47
Reply to  My Cousin Vinai

Exactly. This obsession that Kola can’t play in back 4 is ludicrous. He can grow and develop, we just need to give him chance. It’s not smart to rely on Nacho, who was great but at his age is hardly a future for us at LB. If he wants to go, which is obviously the case, he should go. We have Kola and Tierney will be back in full strength in a month or so.

For all the good business we have done in the last few months this seems the polar opposite, 250k is terrible. To lose all that experience for such a little amount sucks.

Surely worth keeping him for a final season if 250k is the fee?

On the face of it, this doesn’t make a lot of sense and leaves us very exposed until Tierney is fully fit and up to speed – but, good luck to him l guess.

Now been confirmed on the BBC – good luck to him!

And don’t forget that Kolasinac won’t be tested as much as normal in carrying out his defensive duties, as Sp*rs don’t have a recognised right back available for tomorrow , so there’s every chance Emery will start with him on the left of four

Thanks Nacho. That semi-final winner against Man City…

Will be fondly remembered well into the future. Monreal is a textbook example of how foreign defenders need a season or two before they flourish in the EPL.

To every one complaining about the fee.
Calm down we are all about the sell on fee now and I heard we didn’t even have to twist Reals arm to accept a 100% sell on clause! Wtf are they smoking over there?

Stayed for first 8 weeks of the season.

So his transfer fee doesn’t even cover this season’s wages.

I like this new management! Shows there’s still a lot of class about the way we do things if you contrast this with the Koscielny transfer. We don’t need the money at all, ergo “symbolic”, we just basically doing what Monreal wants because we know he deserves it and we trust our long term plan.

Apropos of this, this weekend we might as well go with a 3 man defence and play our best currently fit players and available players in their best positions.
Leno
Chambers, Luiz, Papa
AMN, Torreira, Ceballos, Kola
Pépé, Laca, Auba.

Wouldn’t want to be stiffed out of €900 a week, could pay for the wages of one of Miki’s toes ?

I think we’re underestimating the possibility Kolasinac can have a good game at LB. It is possible.

An exellent player, super loyal and slightly underrated. Particularuly, his offensive qualities went under the radar for many. May you basque in glory in your new club!

Its a bit more tricky selecting a starting line up for the derby. I’m guessing this being a home game, we will prob start back 4. Spurs backline has been susceptable and we could use more numbers high up to put them under pressure plus their flank play isn’t as lethal as Liverpool although still dangerous enough. Hope Emery gets back to getting things right for us. He’s normally spot on. I think if we start with Chambers-Sokratis, then Granit and Guendouzi should sit ahead of them. We will have our hands full tracking Son and Dele Ali. Plus Kane… Read more »

Thanks, Nacho. True Professional. Underrated by many. Has many medals and hope he flourishes back in Spain. Probably letting him go at the right time. The speed and physicality of the EPL is tough.