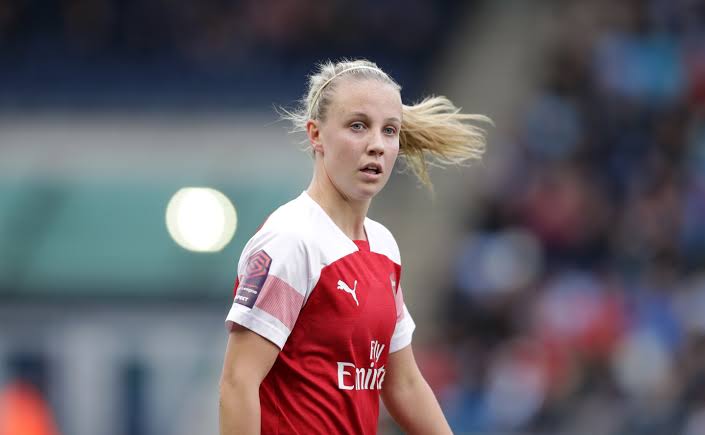 Arsenal began their title defence with a well-fought 2-1 victory over West Ham Women on Sunday. Art de Roché spoke to Player of the Match Beth Mead post-match for Arseblog News.

Thoughts on the overall performance

In the first half we were dominant and in control but I’d say we’d be disappointed with the second half. We’re a team that likes to be in control and we probably let that slip for a while. Then again, it shows the grit and character we had to stay in the game to get the three points.

On the second half

It’s the first game so not everything was going to be perfect. I think we got a little nervy when the first goal went in which we’ll be disappointed with but it’s part and parcel of the game. Teams are getting better and we’ve got to up our game too.

Having spent most of my career at Sunderland playing as a nine, I have good experience in that role. But me, Danielle van de Donk and Lisa Evans have freedom and we swapped positions a few times so it comes naturally to all of us. If you can get into the box at the right time that always helps too.

On having players rotating around her

You’d think there’d be chaos but it’s nice to have all those options. We have players that can create chances as well as put them away so there’s a nice blanket behind the striker.

On how naturally those rotations come

It took some time in pre-season but we’re getting a good understanding between ourselves again. There’ll be more to see from us because there are a lot more levels we can push ourselves to.

? And a sweet debut finish from @JillRoordNL!@ArsenalWFC are picking up from where they left off last season! pic.twitter.com/WPu01MEnWf

On whether she prefers assisting or scoring goals

When you score goals like that you forget about the assists but I got one today and I’m happy with that. 2-0 is more comfortable than 1-0 so I’m happy to put it on a plate for somebody else when they’re in a better position than me.

On her experience at the World Cup with England

The World Cup was amazing. It’s a completely different platform when you’re playing against that calibre of player in every match. For me, getting on the pitch let alone creating goals for Ellen White who was on fire is a memory I’ll have forever.

On getting used to playing when uncomfortable

That’s something I’ve dealt with and I think when we start playing Champions League football it’s going to be an uncomfortable time. There will be teams with much more experienced than us in the competition. It might not be nice all the time on the pitch but it’ll be good for us to experience that.

To save people Googling it was at home.