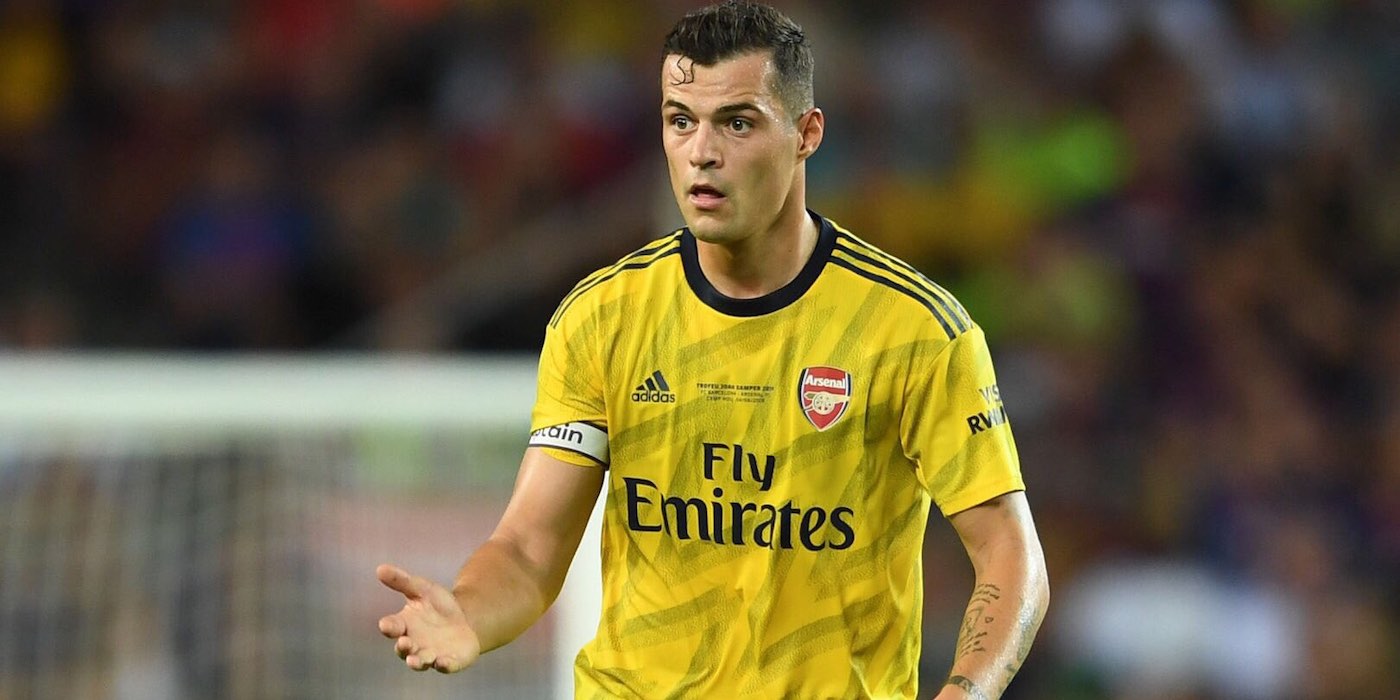 There are concerns that Granit Xhaka picked up an Achilles injury while playing for Switzerland against Gibraltor on Sunday.

Both Physioroom.com and Premier Injuries claim the midfielder picked up a knock and will now be assessed by Arsenal’s medical staff ahead of Sunday’s game with Watford.

Xhaka was subbed in the 74th minute of his country’s 4-0 victory and was in visible discomfort as he hobbled off the pitch following treatment.

To make matters worse for Unai Emery, there were reports at the weekend that Lucas Torreira had picked up an injury playing for Uruguay against Costa Rica. He was taken off before half time in the 2-1 win. It’s unclear whether he’ll be part of the squad to face USA in the early hours of Wednesday morning.

Of our other midfielders, Joe Willock withdrew from the England under-21 team as a precaution, Dani Ceballos is due to return to London today having been on the bench for Spain’s win over the Faroe Islands and Matteo Guendouzi could face Andorra for France tomorrow.

We also have Mesut Ozil in contention to feature.

Granit has had the following to say about the problem: “I’ve been suffering from Achilles tendon pain for a few weeks now. I felt it during the game. It hurts now, but it should be okay otherwise.”

Arteta: Xhaka is staying at Arsenal

Xhaka back in training as Roma move falls through

UE will find another stupid excuse not to.

Ozil ? Against Watford? Why? To be bullied off the ball? Ozil will be perfect to lead in The Cariboo cup. Ozil had 1 good season out of 6 and people still living under his marketing image.

I’d even argue that he played better for Germany in his WC ‘flop’ than he has in his last 90% of games here. Remember him setting up at least 3 on a plate against South Korea for Hummels especially to punt over.

Don’t talk nonsense. For the first 4 years he was was one of the most creative players in the country. He still holds the record fo the fastest 50 assists in the Premier League. Yes he has become inconsistent but there is no need to rewrite history. You have a short nemory

Pogba was not allowed to leave Man U due to the huge advertising campaign Adidas had invested in him at Man U. In NBA Lebron was not allowed to give AD his jersey number due to the advertising campaign nike had him involved in. Ozil’s loss of form and ability coupled with his questionable mentality has lost his place in the team. This can be seen as “sad” by some. I myself do not share such sympathy to a guy treating playing for Arsenal like going on a casual Bingo night once a month -if that. BUT! -Maybe Ozil is… Read more »

Nah, We need Ozil for the upcoming important games in carabao cup and EL games vs Vitoria home & away.

Away? You’ve got to be joking

Re: Xhaka, might be a good coincidence for all involved; takes him out of the firing line after a high profile mistake without him losing face and gives others in the team a chance.

I think Guendouzi is the logical heir of that pivot/point guard spot.

Guendouzi is the logical hair.

I’m well aware which sport it is, thank you. However, the roles are functionally similar: drop deep, pick up the ball in your own half, turn, drive forward, beat the press and distribute.

Get out of your basement and broaden your horizons, mate. Might lighten your disposition.

Innit Santi may be the best Point Guard we ever had.

Ozil is one mighty hell of a quarterback y’all.

Calum or Luiz can be used or should be a preferred dm to solve Arsenal’s defensive problem.

I fully agree, think that should have been a way to go vs lpool, luiz as DM and calum as cb. Instead we got that shitshow.

After the Switzerland – Gibraltar game Xhaka gave an interview to the Swiss TV saying that he was having issues with his achilles tendon for several weeks now und that he probably aggreviated it a bit. He then claimed that he wasn’t seriously injured though. It’s hard to know what that really means but my guess is that he’ll sit out the Watford game and then returns.

Returns? Why on earth would he just magically “return”?

Maybe return wasn’t the right choice of words as I’m not a native speaker (thus understanding his interview in swiss-german). I meant being back in contention for a starting place in the team. Whether that is something we want to happen or not is whole other story.

Would be good if xhaka is injured. Ugly thing to say and want to someone but he really does not contribute atm, and him not accepting that his mistake cost us 2 points against the spuds really shows his loser character.

Would rather see Torreira, Guen and Ceba get more game time. Even Ozil, if we have him, use him.

Someone quickly needs to nail Xhaka’s place in the starting lineup. Sad injury though.

Time to bring in Chambers and Willock alongside Guendouzi. Ceballos behind front three..wow

Chambers? What
He played dm for a related side. Torreira takes his slot with guendoozwillock and ceballos

played dm for a relegated side, and was their player of the season hands down.
with fan favourites sessignon(sp) mitrovic and ryan babel in the team.

he is a good choice vs an out of form side, its not like we are playing city.

we bought holding the season he was voted player of the season at bolton.
also the same season they were relegated to league 1 ….what a complete waste of time ey emyrates?

I don’t see Emery ever using an extra defender on the field in a DM position unless we’re in total injury crisis mode.

For me, Chambers is a CB and should continue developing as a ball-playing CB.

None of this bottom half 8 defenders on the field stuff. This is the Arsenal!

It would be a stupid and naive move by an armchair enthusiast. Throw someone into the deep end will be an emergency(desperate) solution only You would rather go for some chemistry already establish so there are less surprises. Playing for a relegation side very different from the way we play and the space we have to concede going forward. Players also need to be familiar with each other all things aside. I would think the fidget spinner rotating 3 in Cebellos-Guendouzi-Willock we used in opening game a better (and far more sensible) option. Alas some people completely clueless and think… Read more »

Story doing the rounds yesterday that Xhaka has requested time off in mid October as his wife is due to give birth to their first baby. We play Bournemouth on the 6th, and Sheffield United on 21st, so he may not actually miss any game time for us. The crucial match for him will be Switzerland v Ireland on 15th October.

Maitland-Niles can play in midfield. It’s an unpopular opinion but I think he might be good enough to play for Arsenal in midfield. Diaby (and loads others) had to play on the left wing. Imagine we had an injury crisis and he had to play there for two years at the start of his career. The fact he has managed to deputise pretty well for so long should show us not that he lacks focus but that he must be extremely focussed to learn a brand new role for one of the best teams in the league at 21-22 years… Read more »

KingKolo keenly observed, but who would fill in at RB?

In other news: Our Micki is on fire against Bosnia.

Please let him continue to do well… it would be good for all involved.

As a precaution, Xhaka should stay in the physios room….. for the entire length of his contract.

Granit performs a critical function for us. Against Spurs he made (7amkick off will tell you this) 8 headed intercepts around the midway line to keep the ball from lofted into Son and Kane just behind ready to pounce on our porous cbacks. The one challenge he missed was complicated by Sokratis having a rush to the head, joining him and vacating space behind for Son to attack the hapless Sideshowbob band aid we panic bought. Also Granit’s distribution from deep or ability to switch us flank to flank evident particularly in that superb disguised ball to Pepe late in… Read more »

As far as options for us go, I suppose if we have worried on BOTH Granit and Torreira, it may mean we may have to revert to the high energy FIDGET SPINNER rotating 3 in midfield which we used against newcastle for the opener. Cebellos- Guendouzi-Willock Part of the inclusion of Cebellos this summer I felt was BOTH his abilities to replicate the departing Ramsey’s late runs into the box higher up BUT also his abilities in keeping ball further back and working through congestion. In that, we have lacked this ability since Santi got injured many seasons past. Cebellos… Read more »

This lineup should be experimented upon.
Once Tierney, Bellerin and Marvropanos return they can improve this lineup.