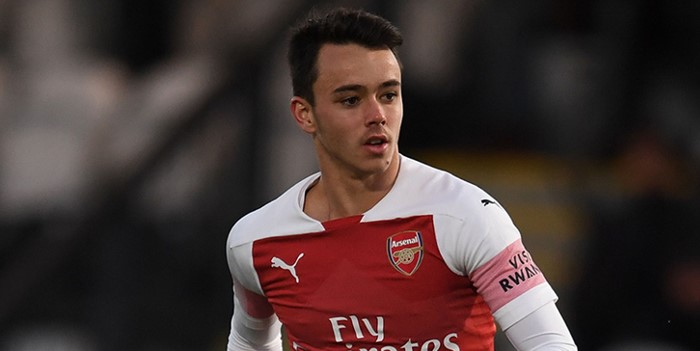 Just a few months ago Robbie Burton remained somewhat under the radar, certainly in comparison to some of Arsenal’s other young prospects, but the midfielder has taken significant strides forward at both club and international level of late.

Perhaps buoyed by his involvement with the Arsenal first-team in pre-season, when his performances were widely praised, Burton has appeared to have an extra spring in his step recently and has also been named as captain of the U23 side.

The 19-year-old has also pushed forward on the international stage, having received his first call-up to represent Wales U21s after previously featuring for younger age groups.

Burton completed the 90 minutes as Wales beat Belgium 1-0 on Friday night in an Under-21 European Championship qualifier and provided another reminder of the quality that he possesses.

Breaking into the senior side for both Arsenal and Wales remains possible for Burton, although he is still not the strongest physically and occasionally makes costly mistakes.

On the whole, though, Burton is progressing very well indeed, and there could be another milestone reached within the next month or so, as it seems likely that he will make his competitive debut for Arsenal in one of the upcoming cup games.

Compared to just a few months ago, things are going very well indeed for Burton.

Really enjoyed watching him in preseason, neat and tidy, keeps things ticking over, let’s see where he is in a year, hope he gets some time on the pitch in the cups this side of January with maybe a short loan in the new year.

Worth noting (Unreported) BOTH ex players Malen and Gnabry played well and scored in the recent Germany-Netherlands fixture.

Along with Iwobi,we simply should find a way to retain these talents better before they realise potential at 23/24yrs.