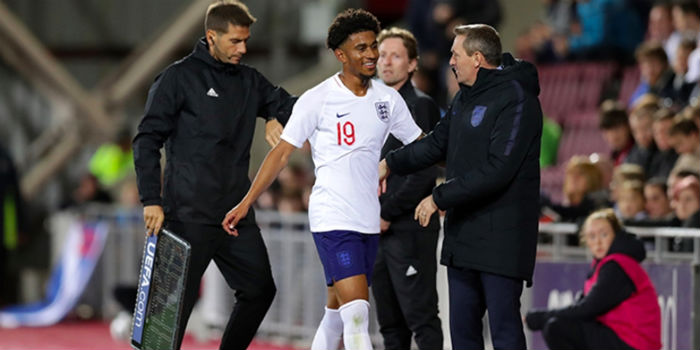 Arsenal duo Eddie Nketiah and Reiss Nelson bagged the goals as England’s under-21s came from behind to beat Turkey 3-2 in their opening Euro 2021 qualifier.

Nketiah, who is on loan at Leeds for the season, slotted home from close range inside four minutes to put the Young Lions ahead before the visitors, courtesy of strikes by Dogukan Sinik and Mert Muldur, turned things around either side of the break.

He's not going to miss from there!

Nketiah produced a clinical finish to level things up on 74 minutes and a minute later Nelson cut onto his right foot before deceiving the keeper with a low shot inside his near post.

Aidy Boothroyd’s players were pre-tournament favourites but went out in the group stages after defeats to France and Romania and a draw with Croatia.

“It was probably overconfidence,” Reid said this week. “It was a mental thing in believing they were going to win the tournament and probably being overconfident, and then actually realising in gameplay that there is another team out there and it’s not a walkover.

“A lot of the goals conceded were individual errors; a loss of concentration. But it [their arrogance] contributed to those errors in judgment on the pitch.”

Well played boys. Keep up the development and you could be Arsenal legends.

Would be nice to see them involved with the senior England team too (for those of us who support them). I didnt really care under the old regime of awful managers and the gerrard/ Rooney generation but I really rather like this England set up.

Was it overconfidence or is Aidy Boothroyd just shit?

I think it’s both – overconfidence from the FA that Boothroyd isn’t absolute garbage.

To be fair the England development structure has done pretty well over last four years.

Exactly. The same players were World champions the previous summer yet in Boothroyd’s hands they couldn’t win a game.

Good one boys. That Phil Foden is really shaping up to be a useful player. Wish he was ours too

Nothing wrong with this comment. Appreciate talent. City won’t let him go though, not unless it is a very high price

Nketiah is so composed in front of goal – love it

2 finishes from our Eddie, that Ian Wright would have been proud of.

We might actually have our fox in the box ladies and gents! Fully expect him to get to 20 championship goals this year. Then come back and get some decent game time next year.