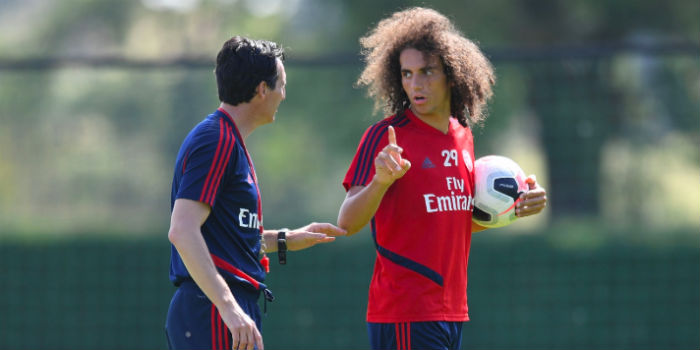 Unai Emery says Matteo Guendouzi’s development over the last 12 months is an example for Arsenal’s other young midfielders to follow.

Having worked on his strength and improved his diet, the 20-year-old midfielder, who joined the Gunners last summer from Ligue 2 side Lorient, has taken his performances up a level, according to his boss.

After an impressive start to the new campaign, he could now be in line for a first senior cap for France when they take on Andorra this evening.

“Matteo is a very good example for how we can develop our young players, with new young players or the spirit within the players who are here now,” Emery told Arsenal.com.

“He started last year, at the beginning, with some doubts about his adaptation after he came from Lorient in the second division in France.

“He was very young, but his ambition and his wish to adapt very quickly, as well as his quality, were very good for us. He started playing and training with us, and after, his progress and development during the season was amazing.

“But also, we were working with him on some details we needed to improve with him – his food, his body, how we can work to make it stronger, his arms, his body, his legs.

“This year, I think he’s taken one step ahead, improving and also giving us one level more in his performances. We want to continue with him, working in each training session and in each match.

“For him and for us it’s a big challenge to take that step ahead. For other young players, his spirit, his progress, his development is a good example, for Willock, for Emile Smith Rowe, for Reiss Nelson. It’s a very good example for everybody.”

Nice to hear Emery talking up our youth. Some very exciting young players coming through and I have a bit more faith than recently that we can help these players push on and realise their potential

Agree and/or also to sell them for reasonable fees if we can have them for the foreseeable future.

The young fella bows down to no one.

Just needs to cut out a bit of the theatrics when fouled/wronged, then he’s captain material.

On the bench again, even though Andorra might have been a perfect opportunity.

No matter, just the experience would have been good for him and no chance of a knock either!

Ya gooner
Reply to  George

Exactly! If Ozil had 1/2 of his drive, he would still be a star. Now I don’t see him as a footballer anymore. Fortnite player, brand, yes. Like Neymar.

Ozil is already star lol. what a silly thing to think he isn’t. Just because he doesn’t get minutes anymore rightly or wrongly by the manager. I still think Ozil can bring that much needed creativity to team, that we are missing in games.

Glad Emery has maintained his confidence in Guendouzi as he has quite a future ahead of him.

It’s not often you find prospects like Guendouzi, he can very well become among next decades great players. Guys be patient with him, like most young players he will make mistakes but that’s part of his development…