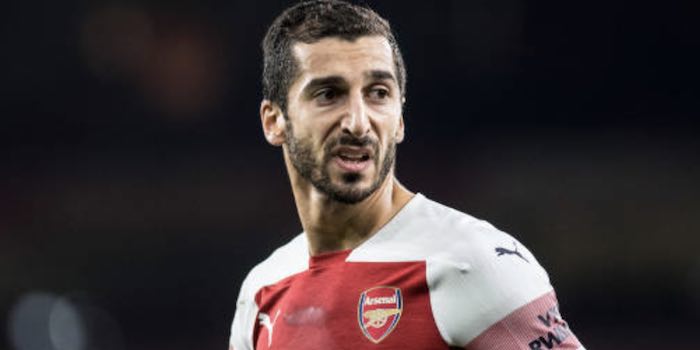 Henrikh Mkhitaryan says that he found life in the Premier League not to his liking, and that the last month of his time at Arsenal didn’t give him any pleasure, so a move to Roma was an opportunity he couldn’t turn down.

After becoming a star with Borussia Dortmund, the Armenian international had spells at Man Utd and Arsenal, and never found the kind of level he had in Germany.

There were flashes of talent, but mostly lightweight, inconsistent performances. The Gunners were glad to take his £200,000 a week off the wage bill, but Mkhi says it wasn’t an easy decision for Unai Emery, Raul Sanllehi and football executive committee at the club.

“I think maybe I was not fitting so well in English football, so I think a change was good,” he said at a press conference this afternoon.

“I’ve heard from many, many players that the Italian League is great, the football is great.

“The last month at Arsenal I was not getting pleasure, so that’s why I said it was better to come to Roma and to get happy and to get the pleasure from playing football again.”

As for why the Gunners helped facilitate a season long loan, he continued, “It is a hard question. It’s difficult for me to say – I am not in the Arsenal board, I cannot say. I think it was because it was my wish.

“I knew I was not going to play a lot – maybe I would sit on the bench, like I did the last three games before the international break.

“I knew here I would have more opportunity to play, because there is the League, the cup, the Europa League.

“The decision was not easy for Arsenal to let me go, but thanks to Roma’s sporting director and board they were able to do it and hopefully I can show why they wanted to do that.”

It’s fair to say it’s a move which suits all parties, and hopefully he can perform well there this season and sort out a permanent switch.

Not the first time I haven’t had pleasure from a Mkhi either.

Every Mkhi needs pleasuring once in a while

hold back his salaries

Bit of a misleading headline I think which will cause a more negative reaction than warranted.

He clearly says the beginning of the season at Arsenal did not pleasure him, which is fair enough because he wasn’t playing.

Agreed.
It was a beginning that did not pleasure most of the fan-base either even when he had the opportunity to pleasure himself. The game against Newcastle is a case in point. But good luck to him.

I think u are missing the play on words. Pleasure, when used a verb, is 99% of the time sexual. So it is not a negative headline, it is just a silly one.

@Andre’s. Ha! Made up indeed. But Pleasure Beach would be using it as a noun.

Given that pleasure is describing the beach would it not be being used adjectivally?

It’s verbally. You and everyone else is pleasuring themselves while there.

He started against Newcastle and again did next to nothing

He knows he’s got to come back, as long as he’s not sold, doesn’t he?

For a man who speaks seven languages, he is quite crap at communication. I do think I understand what he is trying to say; perhaps put better words in a much better order, otherwise it sounds like playing a game for ridiculous money, in world class facilities, in London, is a tremendous burden full of terrible hardships.

I think I’d be more bothered about this if he was tearing up the league. He wasn’t and while I think we marginally got the better of the Samchez-Mkhitaryan deal, I do believe we have younger players who are shpwing far mpre promise in an Arsenal shirt.

Good bye (for now) and good luck. I hope he earns himself a permanent transfer because we could do with reinvesting that back into the squad ?

The Spoon
Reply to  Anthony

I don’t think we got the better deal, on his day sanchez was unplayable. If he’d wanted to stay and was happy his form would be much better than it is now. Miki never showed up, might even be his twin brother playing for us. However, had we not got rid of sanchez we wouldn’t have the strike force we do now, so maybe it was a better long winded deal?

Jeff
Reply to  The Spoon

While I do agree that he was largely poor for Arsenal, I won’t forget his first full game (lit it up), that deflected away goal in the Europa League semis (maybe quarters?) in 2018, and the nice away goal he had against Chelsea to level that game in the league last year. His occasional exploits were part of why he was so frustrating. But he seems like a good guy and I wish him well

Anthony
Reply to  The Spoon

I agree that before his final half-season Sanchez, for us was brilliant. His agitation for a move to City and the failed deal close to deadline that season was the start of his decline for us. At United, he never really reached the level he was at when playing for us and I’d argue that we got more out of Mhiki in the time spent with us than United got out of Sanchez. On paper, Sanchez is the far better player, that is without question. He had been hampered by the way he was utilised in a pretty restrictive system… Read more »

Clockendrider
Reply to  The Spoon

How many of those days did Sanchez have for United? And how about the divisive influence he had become in our dressing room! About as many as Mkhitaryan had for us. So we got rid of a player who was running down his contract and replaced him with someone for whom hopefully we can get a fee. Hardly ideal but on balance a better deal.

And we could have just sold Sanchez for 60M

Well off you trot then,, your not that great anyway, don’t forget to close the door on ya way out

Odd to admit as much given it’s only a loan move. We’re used to cards close to the chest in football.

Glad to see the back of him; nearly all the dross has been shifted, just leaving the two players (we all know who they are) to bin as well.

I could easily name three

Neither did Manu tickle his bum…

I’ve only been to watch the Arsenal once last season and it was the night he dominated against Bournemouth!
Away from that he’s been mediocre. Probably being kind to him. He’s been shite- there I said it!

Somewhat misleading headline that’s likely to cause the fans who aren’t able to regulate their emotions (and there are many) to overreact and take it personally, even though his response is quite measured and fair.

Mykal
Reply to  My Cousin Vinai

Exactly. It made me chuckle to read this comment, agree with it and then read the comment one below….

Hang on a sec. Is he forgetting hes on loan, and not actually sold yet? Hes STILL contracted to Arsenal. What an absolute douche lord

fuck this Utd reject, he was totally useless for us, one of our worst ever signings. we are too big for him anyway!

And Im told I have anger management issues.

A P
Reply to  Lettra

I can imagine Cygan’sbaldspot crying as he uttered those words.

Hopefully he will do well at Roma and they’ll want to buy him permanently next Summer (or someone else will). Worst case is he performs poorly, nobody wants him and we are stuck with him next year as we are with Mustafi this year.

C’mon Blogs.. Headline is a bit unfair for a player who was never disastrous for us. Not something I can say for some 2 other players at the club.

Can’t say you did a lot for me either, Mkhi… now Kolasinac on the other hand…. ?

If you don’t pleasure your Mhki it will become unsatisfied!

Too hard on the Mhki jokes?

If you don’t pleasure your Mkhi it will become unsatisfied!

It’s a shame it didn’t work out and I hope he has better and happier times in Italy. Let’s also hope the move becomes permanent as soon as possible. As far as I’m concerned he’s done nothing wrong, he just didn’t live up to expectation.

I would wager that it actually WAS an easy decision to let you go. How you ever managed to get a game in the famous Red and white is beyond me.

He never delivered on a consistent basis and, Serie A or not, he’ll need to be much better there too to stay off the bench. (And off our books!)

Dont see any issue with what he is saying.
Like all players, he wants to play. He is smart enough to realise at Arsenal he wont get much game time this season so he was happy to goto Roma to get more game time.

Either that works out and he can secure a permanent move next season, or he comes back to Arsenal and gets paid to sit on the bench.

Why people think his comments were difficult or inappropriate….. who knows?

Hopefully he pleasures himself to a 30 goal season in Italy and gets sold for some pleasuring cash in the summer. Or hell, even in January if he gets 30 goals by then. Either one ia just fine by me.

He is not happy because like Ozil he is a 10. The system plays him at 7. He can sometimes get a away with it because he is stronger, faster and plays better defense so give him a break. They have to sell these players because they don’t fit in their systems

Hopefully he has a great season at Roma, and we can shift him for a few quid soon. He’s such an odd player, he seems to do all the difficult things perfectly, then screws up the easy bit. He always seems to control the ball well, take a good touch, dribble, then do a terrible shot or pass.

Footballers eh? How many of us get ‘pleasure’ from our jobs?

I’m happy I no longer have to watch his constant mis-placed passes and wayward shooting over the bar from 10 yards out.

The headline obviously went over a lot of people’s heads judging by some of the comments.

Blogs was just trying to be funny and start a thread with a lot of bad but funny puns.

£200,000 p/w for what? Enjoy your stay in Rome and let’s hope you manage convince them about your qualities

This is one of those situations that leave me sort of whelmed. Player that mainly disapointed, now playing somewhere else. Equally, I wouldn’t be looking up how to tie a noose if he ever came back. A few slices of ‘Meh’, with some ‘Pfff’ sauce’, on a nice multigrain bap.

We let both this guy and Iwobi leave. We are clearly light on experience out wide.
Need something this Jan or we’ll be in trouble once Pepe gets injured