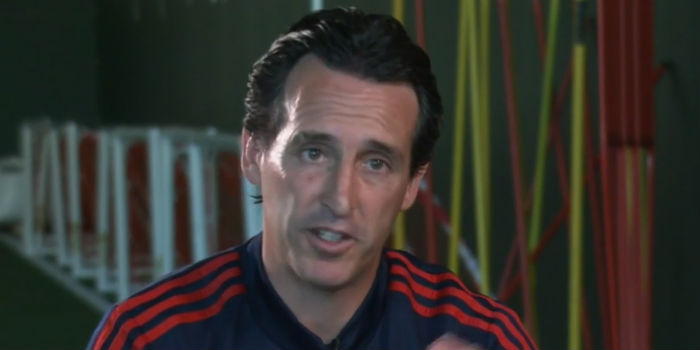 Unai Emery says his Arsenal side has found itself sitting too deep in recent matches and admits a collective effort must be made to improve defensively.

The Gunners have allowed Watford and Eintracht Frankfurt to take 55 shot on goal inside 180 minutes and while we’ve not lost either game, it’s a situation that is concerning the boss, even if he thinks some of those efforts weren’t exactly dangerous.

Facing the Sky Sports cameras after the 3-0 win in Germany and ahead of Sunday’s showdown with Aston Villa at the Emirates, Emery said: “We need to be more competitive and also we need to improve defensively.

“It’s not also [just] for the defensive players or the goalkeeper, it’s for all the team. We need to be more compact.

“Secondly, sometimes we are defending deep, more deep than we want. A lot of shots they are not important, not dangerous for us, but we don’t want to defend those situations deep a lot of times.

“We need to improve, we need as a team to be more compact and start our pressing a little more ahead, not let the opposition get to our box quickly.

“Yesterday [against Frankfurt], we could do that work better. On Sunday, at home against Aston Villa we are going to try to do better.”

This guys has them for 6 days a week and shouts at them nonstop for 90mins twice a week. How are his messages still not getting through?

Saka doesn’t seem to be able to understand him apparently…

Training ground spy:
Emery: Over there, OVER THERE!!!
Saka: What him say?
Freddie: He says, over there, points.

You’re such a shit head…

Kids these Days are all about their Twitter devices and whatyounnacallit. Reading it here in their Arseblog devices might be what finally gets it through.

High pressing is the answer. Dross teams like Watford don’t have the technical ability or composure to deal with a press, aside from long balls of course, which we should win.

Camp it in the opponent’s half.

Looked like we do not have the ability too.

I struggle with the whole “We need to be more compact. We need to press more…” Mate, you’ve had 16 months to make sure every player knows what we need to do. If you want a compact defence then don’t work on getting one. Make sure you have one.

It’s like, well okay great, we can all see that. But you’re the bloody coach! Coach them to do it, like you should have been from day 1 over a year ago! Don’t say what you want, teach the players what to do in order to achieve it. This is literally the basis of coaching Mr Emery. Setting up a compact defence was also the primary objective when he took over from Wenger, and we are worse at it. It is also the first thing that mid/low table managers are able to do when coming into a new job to… Read more »

Yup. Especially when the problem became apparent towards the end of last season. He had the whole of the summer to readjust things. Yet we look worse off this season.

Tried to upvote this twice, but they wouldn’t let me.

You beat Watford by attacking, whether by high-pressing or by possession, or over the top. Exhibit A: Man City 8-0 Watford. And that flatters Watford. Yes, Many City are a better team than we are (well, a much better team), and they were at home. But they played with a makeshift defense (Otamendi, who is not quite as good as Mustafi, their only real centre-half) and left the most in-form player in England, Sterling, on the bench.

We can improve our defence as much as we want, but if we have players who admit that they are scared of Watford , then there is no hope unless we get rid of that mentality. Technically we are gifted, but mentally we are as good as poop in an infant’s dipar.

I don’t see that as anything other than a subtle dig at Emery. Xhaka has been through a hell of a lot in his life. There’s very little he’ll be scared of. I think he was referring to the tactics and attitude of Emery.

Lack of Perspective
Reply to  HelderHughes

Or his team mates attidude. Lets not jump to conclusions

HelderHughes
Reply to  Lack of Perspective

Yeah, maybe. But when you come off at half time 2 up against the bottom club and the manager says 2 goals is not enough, it doesn’t exactly fill you with confidence. And Emery then basically tried to park the bus. Pretty pathetic game management given the stature of our club.

The manager saying 2 goals vs bottom table Watford is not enough is exactly the type of thinking a big team should think.

Did you even bother to read?

Compact or not, a big help would be to stop giving away penalties. Just a thought…

Giving away penalties is partly the consequence of last gap defending

You’ll give away penalties if the opponents are getting into positions to take 55 shots at you in two games. Do the math. That’s almost a shot every three minutes. It’s not rocket science

It’s important for us to have a big moment and big performance for each player. We are working in our way to be strong for the whole team. Etc.

Just watched the video and I love this guy. Doing some rounds of English duolingo myself in a week can value the effor itself. Of course I do not have to manage a big football team and to be a protagonist.

I was going to say the same myself and decided to read down to make sure no one else had said it. Emery stating the obvious here.

Filed under bears shitting in the woods, the list of catholic Popes and the scientifically proven fact that regular breathing prolongs life.
Emery, you’re a clown.

I remenber two or three times, vs watford, where ozil was asking to press higher ( yes it can be ironic but for me its normal. He have a great tactical instinct and “science of placement”.) Nobody was listening, maybe too concerned by what the coach asked. Maybe we need someone who can dictate the pressing directly in the pitch. Especially when you don t understand what your coach he s saying. And i think they can see and Feel things that the coach cant. That s part of our boring way to play. Emery looks like someone scared. Like… Read more »

The players however will adapt to what they perceive to be their weaknesses. So when you play a back 4 of Luis mustafi Chambers and saed they know they lack pace. They are therefore not going to want to defend a high line. If you have set out a plan with the (inexperienced), midfield to play higher up the pitch it is obvious the gap between the defence and midfield will grow as one goes deep and the other adheres to a plan. Leaving lots of gaps for the opposition… Leading to lots of chances… With bellerin holding and Tierney… Read more »

The proof is in the pudding.

I still want him gone.

Outsmarted by Tom Cleverly. Says it all really.

I think Keown said it all on this one over his last couple match analysis. Brief summary from him: – No coordination when players press leads to gaps – Players dropping off too deep leads to gaps – Lack of commitment to stop crosses – Lack of commitment to stop play advancing into dangerous areas (includes tracking runs off the ball) These are very old and familiar failings so not much new to report although his analysis is good to watch all the same. But watching Keown reminded me of when he worked with us in 2006 and how that… Read more »

Keown needs to get on the phone to Edu and Freddie. Would love to have him around the place communicating clearly about how to harrass the opposition and instill a fighting mentality. Slight problem is that hes slagged them all off on TV so many times.

Maybe it was multiplication rather than addition?

We’ve really utilised the full pitch while defending at times this season, but stayed nice and compact going forward.

Oh wait that’s not what he wants..?

Bernd? Is that you, Bernd?

I always enjoy listening to this Guy’s football music. it is like you know there is something special said, but no clue what it actually means.

Keep it up Mr Em

Well at least we’re all in agreement.

“not let the opposition get to our box”
The basis of defending me thinks.

We need to be more compact? Really Unai? What gave it away?

I feel David Luiz is a major reason of us moving too deep. He knows he lacks the recovery pace and has been dragging the defence deeper. Kolasinac lacks pace and mobility too so playing higher doesn’t work for him too. Xhaka at CM is slow too so he can’t cover for the full backs when they are up the pitch therefore players are running right at us. It may be time to either move to a back 3 till Bellerin and Tierney come back and play Chambers or Holding giving us more protection. He needs to react till he… Read more »

A Different George
Reply to  Manav

Maybe, I don’t know, play a defensive-minded defensive midfielder with pace and energy in front of the back four, instead of relying on Xhaka. Let Torreira win the ball, let Xhaka pass it.

In a meantime MC 6 Watford 0 and it’s only 56min. Unai go away and hide yourself.

I’ll believe it if we half the chances conceded in the next game against Villa. It was painful to see everyone in attack like school boys chasing the ball at 1-2 against Watford.