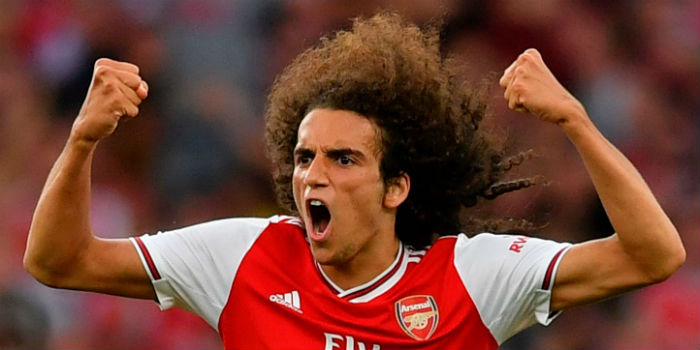 We’ve peaked with the headline, but we’ll carry on.

Matteo Guendouzi has revealed that he was having an afternoon nap when France under-21 coach Sylvain Ripoll knocked on his door to tell him he’d been called up to the senior squad by Didier Deschamps.

Our frizzy-haired midfielder, who was man of the match in the North London derby yesterday, had been expecting to play for Les Espoirs in their European Championship qualifiers with Azerbaijan and Slovakia this week but has been given the nod for Les Bleus after Paul Pogba withdrew with an injury.

Guendouzi has long been courted by the Morocco senior team, for whom he’d qualify to play via his parents, but resisted their overtures to stay faithful to France.

In a heartwarming story [translated by Goal.com], Guendouzi revealed exactly how surprised he was to be welcomed into the fold by the reigning World Champions.

“I was having an afternoon nap, someone knocked at my door, but I didn’t hear it, because I was asleep,” Guendouzi said. “Then the coach (Sylvain Ripoll) rang me, he said it was me who knocked etc, so I went to see him directly.

“In my head I was like wow, I didn’t believe it initially because 10 minutes earlier I was sleeping. I thought I was still in a dream.

“Then the coach spoke to me some more, explained the situation that I was with the senior team and it’s a dream.

“Thankfully I took a shower after, so that it could properly sink in. I think the coach can describe my reaction better than I can, but my eyes popped out of my head.”

“It is a big surprise for me today,” added the Gunners midfielder. “This is a dream of mine since I was a kid.

“This is extraordinary, I think that any French player would want to be in this team.

“It is ginormous. There aren’t enough words to describe how it feels.”

Guendouzi is the only member of the Arsenal squad to make the France squad. For some reason, Didier Deschamps continues to overlook Alex Lacazette despite the striker’s fine form. (Yes, we know he also picked up an injury at the weekend)

You can call it a nap. In France that’s a working lunch.

He was really good yesterday. The promise of last season looks like it is being fulfilled. Last season’s weaknesses, to dwell on the ball too long, and not realize a challenge was coming from behind him, as well as sometimes being pushed off the ball too easily, all look much improved this season. And nineteen!

My boy!!
Well deserved Gwen. Onwards and upwards from here. Kid is an absolute gem.

Hmm an afternoon nap that’s a golden girl move how old did they say he was ..maybe he is an age cheat?

You’re saying Guendouzi is a w*nker?

I may be wrong but I reckon even the most successful of men folk enjoy a cheeky jostle from time to time (or indeed with much regularity), no shame in it, but I wouldn’t dare call Marvellous Matteo a wanker. He’s fast becoming a ridiculously good footballer for the Arsenal!

Wanking myself to sleep is good medicine after disappointing Arsenal result.

This was exactly my thought – not quite the same reasoning though. Struggling to wrap my head around the thumbs down.

Well deserved after a ginormous performance in the NLD

Happy for Guendouzi though

I’ve not been his biggest fan, truth be told. However, he was easily the best player on the pitch against Spurs. I was very impressed, and, if he can keep up with that kinda performance he will be definitely be one to watch.

Let’s be wary, and not big him up too much as we have seen how that tends to work out (Wilshere, Lingard, Rashford, etc.)

Congratulations Matteo! He’s a huge talent. Hope he goes far in his career with us.

Good for him, especially sticking to his guns in wanting to play for France.